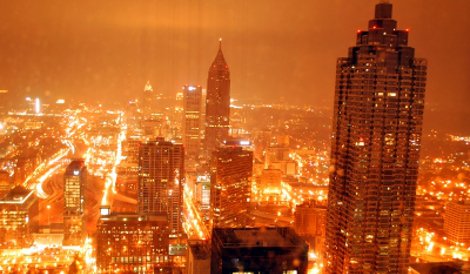 The Atlanta metro is one of the fastest-growing data center markets in the US. Market fundamentals are strong, and the area is poised to see more activity in the near future.

Tim Huffman, national director of the Technology Solutions Group at Colliers International, says the gap between supply and demand in the Atlanta market continues to be fairly wide, despite a significant year of growth in 2012, citing industry analysts. The demand is twice the amount of available data center space, he says.

Key elements driving demand in the Atlanta market include high gross domestic product, headquarters of about half a dozen of Fortune 500 companies, a significant corporate-data-center footprint and a large airport.

The Big Kahuna in the Atlanta-metro multi-tenant data center realm is QTS, with two massive facilities that are about 30 miles apart. Other significant players in the area are Equinix and Telx, followed by providers like Level 3, Internap and Savvis, Huffman says.

There is a lot of space currently on the market.

Owners of the major data center and network-carrier hub at 250 Williams St. (downtown Atlanta) are marketing about 170,000sq ft of powered-shell space for wholesale lease, according to Huffman - space that came on the market only last year. The building currently has 130,000sq ft of data center floor, whose tenants include the data center services provider Internap and about 30 carriers.

About 25 miles north of downtown, in Alpharetta, ByteGrid is developing a site of a former SunGard data center it has bought. The new property owner is planning to build another 100,000sq ft building that will yield about 50,000sq ft of data center space for a pure-play colocation offering, Huffman says.

West of Atlanta, in Douglas County, a technology park is being developed on the same street with existing data centers owned by Google and the wholesale provider Digital Realty Trust. Savvis and AT&T share the latter facility.

The developer has not stood up the buildings on the future 300-acre tech-park development, but the area could attract some Greenfield data center construction in the future, Huffman says. QTS is also doing a fair amount of expansion within its two buildings.

More players are likely to enter the Atlanta market. There is a “parade of data center service providers” coming through Atlanta on a regular basis, looking to buy land or powered-shell space because they see the metro as a significant growth market, Huffman says.

There is plenty of demand, an educated workforce and reasonably priced power. The metro is also very well connected.

According to Huffman, it is one of the most connected cities in the south.

One issue he feels the State of Georgia overall could do to make itself even more competitive is improve its tax-incentive proposition for data center operators. To that end, governor Nathan Deal has created a workforce to explore the options.