Self-proclaimed space nation Asgardia is to launch a small satellite into space with 512GB of memory in an effort to test long term data storage in space. It appears that the total storage available to end users is only just over 200MB.

Questions remain about the project, and the group’s aim to become an internationally recognized nation that will one day charge taxes and have its own laws. This satellite is based on CubeSat - the open-access standard for tiny 10cm, 1.3kg modules which are regularly ejected into orbit from the International Space Station, mostly carrying university science projects.

Beyond the cloud layer 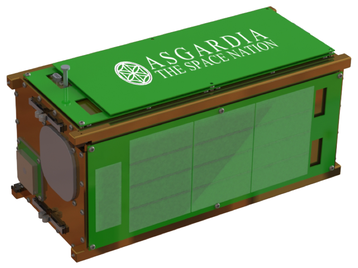 The Asgardia-1 satellite will launch aboard Orbital ATK’s upcoming mission to the International Space Station (ISS) on September 12, 2017, in a contract handled by NanoRacks.

“Sixty years after the launch of the first ever artificial satellite, Sputnik, our own space satellite, Asgardia-1 will mark the beginning of a new space era, taking our citizens into space in virtual form, at first,” said the group’s founder and primary funder Igor Ashurbeyli, a Russian businessman and scientist.

In an FCC filing, the group said: “The primary payload is a solid state device hard drive. The drive is loaded on the ground with data, and the data is updated once on orbit. A file is returned that verifies successful data transmission.”

That hard drive features 512GB of capacity, some of which will be used to store a small amount of data from Asgardian ’citizens.’ The first 100,000 people to sign up online will be able to store 300kb, the next 400,000 will get 200kb and a million will be offered 100kb of space.

Once in orbit, data will be updated and downloaded using the Globalstar constellation of communication satellites. As a Low Earth Orbit satellite, the long term data storage project will last just five years before burning up, but the group promises data will be uploaded to future satellites.

The filing also notes that Asgardia-1 will contain internal and external particle detectors “to determine the radiation dosing that the internal electronics are receiving.”

The satellite appears to be a 2U CubeSat, following the standard for open-access nano satellites. It is a 2U module, consisting of two of the standard CubeSat 10cm cubes. Obviously, this is not to be confused with the data center’s rack unit U, which is 1.75 inches of a 9-in rack. 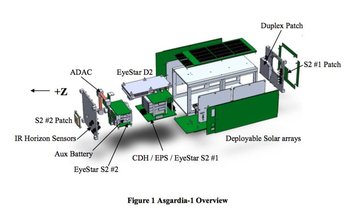 Should the project prove a success, the law surrounding what can be stored on the space SSD is tricky and untested.

As Asgardia-1 will be sent into orbit from a NASA launch pad, the US government will be legally responsible for policing the satellite and enforcing its laws under The UN’s Outer Space Treaty of 1967.

“The Outer Space Treaty gives general principles that were negotiated at the end of the ’60s to try to stop nuclear weapons in space. The idea of data centers in orbit simply wasn’t on the agenda.”

In the future, should Asgardia want to operate outside the treaty, it could “find a launching country that is not a signatory to the space treaties,” Mark Sundahl, professor of space law at Cleveland-Marshall College of Law, told Motherboard.

“There are no international law obligations. At that point, it’s the Wild West.”

Asgardia is not alone in wanting to store data in space - Oregon engineer Keith Lofstrom wants to fill the heavens with small data centers. The Server Sky project hopes to use solar cells with communications, processors, RAM and Flash attached.

He writes: “First generation Version 6 thinsats are 16 centimeters across (about 6 inches) and 0.07 millimeters (70 microns) thick, and weigh 5 grams. They can be mass produced with off-the-shelf semiconductor and display technologies. Thousands of antennas provide intra-array, inter-array, and ground communication, as well as precise location information. Thinsats are launched stacked by the thousands in solid cylinders, shrouded and vibration isolated inside a traditional satellite bus.

“Traditional data centers consume almost 3 percent of US electrical power, and this fraction is growing rapidly [Ed: Not exactly]. Server arrays in orbit can grow to virtually unlimited computation power, communicate with the whole world, pay for themselves with electricity savings, and greatly reduce pollution and resource usage in the biosphere.”

But while storage efforts mostly remain far out and often fantastical, space clearly plays a huge role in the world of data centers. Not only are companies exploring using lasers to beam data through space between data centers, but businesses are currently in a race to offer Internet services via satellite to the next three billion potential users.

Of course, there is already data storage in space. The International Space Station uses a network of laptops for its crew and for experiments on board. To learn more about it, as well as several other extreme data centers, be sure to read our latest magazine which launched yesterday.