Project hopes to replace electrical switches with optical ones

The UC San Diego Jacobs School of Engineering has been awarded $7.5m to research photonic network topologies for data centers. 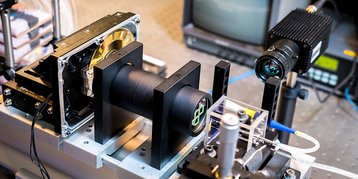 Photonic switches: Can you see the light?

“By removing bottlenecks in the network, the computer servers, which account for the majority of power in the data center, operate more efficiently," said George Porter, a professor of computer science at UC San Diego and co-principal investigator.

"Our project, supported by ARPA-E, aims to double the server power efficiency by transforming the network into a high-speed interconnect free of these bottlenecks."

Servers send packets of data which are converted to electrical signals and sent to network switches, before being sent to their destination. But the data travels as light over fiber, so must be converted back and forth on its journey.

Optical switches, on the other hand, transmit data using light, removing the need to convert - something that adds uneccessary delays.

“The photonic devices we’re developing aren’t actually used within the servers per se: instead, the devices connect the servers within the data center network using a more efficient optical network,” said George Papen, a professor of electrical and computer engineering at UC San Diego and co-principal investigator on the project.

Less power is used to route the data, but - more importantly - less power is wasted on inefficient servers that wait for data to be transferred around. The team hopes to be able to show that photonics can be cheaper than adding the additional semiconductor chips required to get the same data rate on existing electrical networks.

“It would be lower cost in part because you’re using less energy, but also in part because if you wanted to build a very high speed network using existing commercial technology, the cost of adding additional chips to build bigger switches increases dramatically,” said Porter.

“It’s not a linear relationship of double-the-speed for double-the-money; you can think of it almost like double the speed for quadruple the cost. On the other hand, optics, at these very high speeds, follows a more linear cost relationship.”

The project builds upon the Lightwave Energy Efficient Datacenters (LEED) Phase One initiative, which was also backed by ARPA-E featured Porter and Papen.

Running from 2017-2019, it built photonic technology and network architecture that will be used and expanded for this study.

The tech was spun out into a company called inFocus Networks, let by UC San Diego alumnus Max Mellette and featuring George Porter. Previous attempts had tried to build a full crossbar architecture that allowed any single node in the data center to talk to any other node, but inFocus instead intentionally limits connectivity to a smaller number of nodes - but at a higher speed.

Now, the team will work with Sandia National Laboratories to scale up the architecture to function with larger amounts of data and more nodes. They plan to build a realistic testbed demonstration of the project.