The Trans-Atlantic subsea cable connects the US to Denmark

The cable, which launched in 2020, is Aqua Comms' second Trans-Atlantic subsea cable system after the AEC-1, and connects the US to Denmark. 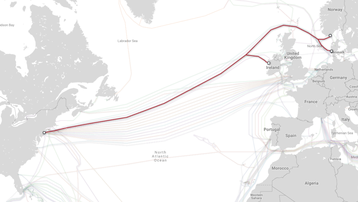 Its landing in Ireland was confirmed by Aqua Comms CEO Nigel Bayliff in a LinkedIn post this month.

It is the first new subsea system directly linking North America to Denmark and the Nordic region in twenty years, and starts from NJFX, a carrier-neutral cable landing station and Tier 3 colocation facility in New Jersey, providing the option to bypass New York City.

Also named Havfrue, (Norweigian for "mermaid") the cable is funded by a partnership between Google and Facebook, with investors including Aqua Comms and Bulk Infrastructure.

Bayliff also revealed that the AEC-3 cable which will connect Boston, US, to Slough, UK will be complete soon. It's the company's third Trans-Atlantic subsea cable, and will deliver 10GB, 100GB, and 400GB wavelengths, and is expected to launch next year.