The company this week announced the groundbreaking of its 180MW hosting facility in Ellendale, Dickey County, took place at the start of the month. 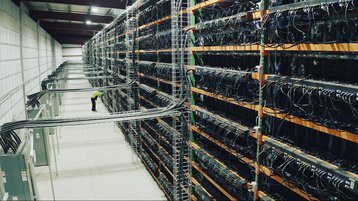 The Ellendale facility is expected to begin energizing early in the first half of calendar 2023.

“The community of Ellendale and representatives of North Dakota have been amazing to work with as we bring this next facility to life,” said Applied Blockchain Chairman and CEO Wes Cummins. “Having the new 180MW facility located close to significant wind power capacity will allow it to be powered with renewable energy to further propel future high performance computing solutions for global enterprises and applications. The entire capacity of this facility is already under contract, demonstrating the significant demand we continue to have for our hosting services.”

Applied Blockchain and Marathon Digital Holdings have mutually executed the option for an additional 70MW of hosting at the Ellendale location. This brings contracted capacity with Marathon to 276MW and total contracted hosting for the company to nearly 500MW.

Earlier this year Applied Blockchain said it planned to change its name to Applied Digital Corporation.

- Mawson Infrastructure Group Inc. announced plans to sell its mining facility in Sandersville, Georgia to CleanSpark, Inc. for up to $42.5 Million. The deal includes 6,468 ASIC Bitcoin Miners and will Mawson will receive up to approximately $11 Million in CleanSpark stock (around 5.5 percent of the company); the transaction is expected to close in October.

James Manning, CEO and Founder of Mawson, said: “We have thoroughly enjoyed working with the CleanSpark team on this transaction, and look forward to working closely with them going forward. We now intend to focus our attention on the continued development of our Pennsylvania and Texas facilities where we see the opportunity for compelling returns on capital. We would like to sincerely thank the City of Sandersville for welcoming us into their community and being high quality partners over the last several years.”

Zach Bradford, CEO of CleanSpark, said, “We are pleased to welcome Mawson’s Sandersville site and its operating teams into the CleanSpark family. The site is nothing but impressive—well-run by over 20 dedicated professionals who have taken significant pride in the design, development, and maintenance of the site. We are enthusiastic about Georgia and believe that our expansion there will continue to build value for our shareholders and the communities we operate in throughout Georgia.”

Nick Champion, the State Minister for trade and investment, said the plant marked “the beginning of a new economy out here at Whyalla.”

- BiteNile Holdings now has three of its subsidiaries as publicly-listed companies. TurnOnGreen, Inc., an electric vehicle charging and power solutions company, became a publicly traded company in September 2022 after its acquisition by Imperalis Holding Corp, a publicly traded subsidiary of BitNile; Ault Alliance, Inc. a holding company focused on Bitcoin mining, data center operations, commercial lending, activist investing, oil exploration, hotel operations, and other commercial real estate holdings, is intended to become a public reporting company in the first half of 2023; and Gresham Worldwide Inc., a provider of electronic solutions to militaries and defense companies, became a publicly traded company in September after a share exchange agreement with Giga-tronics Incorporated.

- Officials in Bulloch County, Georgia, have granted conditional-use permission to Excelsior Electric Membership Corporation for a 10MW cryptocurrency mining facility to be placed outside the town of Stilson. LN Mining is seemingly the company looking to operate the mining equipment; the company already has a facility in Swainsboro in Emanuel County.

- A report from the White House has warned that crypto-assets could hinder the US’ broader efforts to achieve the country’s net-zero carbon neutrality goals.