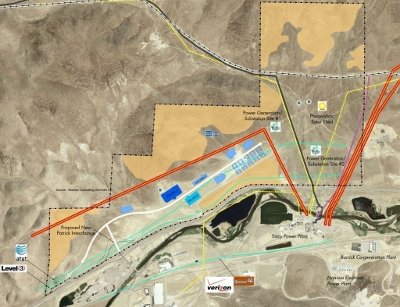 Apple is planning to build a large data center campus at a new technology park near Reno, Nevada. The park provides access to many sources of electricity, including power feeds that reach across state lines and into Canada, but no decisions on what Apple’s power mix in Reno is going to be have been made public.

KC Mares, CTO and one of four primary partners in Unique Infrastructure Group, Reno Technology Park’s developer, said Apple was going to contract with one of the many wholesale energy providers in Nevada. “They’ve had detailed discussions with some of those wholesale providers,” he said.

“They’re looking for a strong mix of renewables, but that is ultimately going to be their decision,” Mares added, saying Apple had not finalized the plans for powering the future data center. “They’ve also considered installing renewable-energy infrastructure at the Reno Technology Park, but those details will be determined over time.”

Apple has recently committed to supplying 100% of energy needs of its data center in North Carolina (currently under construction) from renewable sources. The company said it would use a mix of solar arrays, biogas-fueled fuel cells and clean-energy purchases to pull that off.

According to public documents local officials released online Tuesday, Apple estimated that its latest data center near Reno would launch at 15MW of capacity in fiscal year 2012-2013, increasing its power draw by 5MW each subsequent year until it reaches 35MW in fiscal year 2016-2017.

By 2012, the company is expecting to have invested US$1bn in the Reno data center project, codenamed “Project Jonathan”, according to the documents.

Apple has secured substantial tax breaks from local, county and state governments in return for its commitment to the region. Mares said these tax breaks were now available to other companies that decided to build at the technology park.

“The tax incentives that had been approved are now in place for any of the other tenants that wish to come to Reno Technology Park,” he said.

Reno Technology Park is a 2,200-acre property offering access to eight electrical transmission lines, each providing access to renewable-energy sources, many of which generate hydroelectric power. Additionally, the park’s developers have set aside enough room for more than 20MW of solar capacity.

There is also more than 100MW of wind and geothermal generation capacity nearby.

The campus offers access to two natural-gas transmission lines to any company that wants to use gas for onsite generation. “We will make connections to those lines and any of the tenants at Reno Technology Park can use natural gas,” Mares said.

The developers have also been in discussions to purchase a nearby natural-gas-fueled power plant that can potentially produce up to 240MW, Mares told DatacenterDynamics in earlier interviews.

For more on Mares and the Reno Technology Park, read the cover feature of the latest issue of DatacenterDynamics FOCUS magazine. Register here to get the digital copy.