Wind for the cloud

Amazon will fund a 189 megawatt wind farm in Hardin County in northwestern Ohio to help power its three new data centers in the state.

Thought to cost $300 million, the Hardin project is expected to begin generating power in December 2017, and will generate 530,000 megawatt hours (MWh) of wind energy annually. 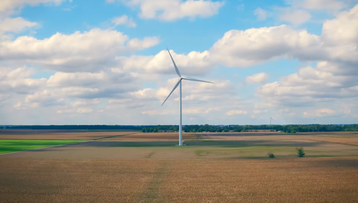 The cloud company is working with EverPower on the project, which the developer has been planning since 2013, overcoming local resistance in the Ohio Supreme Court in 2014.

EverPower will construct, own, and operate the new wind farm, and had hoped to build it long before Amazon’s involvement, but may have struggled to do so without the guaranteed business AWS provides.

“We applaud Amazon’s goal to power the global infrastructure for the industry-leading AWS Cloud with renewable energy and are pleased to collaborate in this effort,” Jim Spencer, CEO of EverPower, said.

“Leading companies like AWS are enabling the construction of large, utility-scale renewable power projects that will ultimately help to off-set the energy supplied by fossil fuels and create a cleaner, healthier environment for our communities.”

Peter DeSantis, VP of Infrastructure at AWS, said: “We remain committed to achieving our long-term goal of powering the AWS Cloud with 100 percent renewable energy.

“There are lots of things that go into making this a reality, including governments implementing policies that stimulate cost-effective renewable energy production, businesses that buy that energy, economical renewable projects from our development partners and utilities, as well as technological and operational innovation that drives greater efficiencies in our global infrastructure.

He added: “We continue to push on all of these fronts to stay well ahead of our renewable energy goals.”

To achieve this, the company makes use of power purchase agreements like the Hardin project, where the specific power generated from a renewable source may not necessarily go towards an Amazon system, but is paid for by the company and added to the grid.