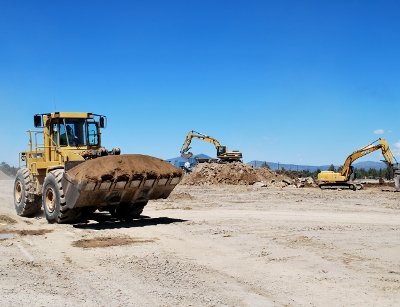 The company received permits for this site and started construction there several years ago but had to pause the project because the "economy became unsettled," McLane said. Data center construction is underway at a second Morrow site that is near Boardman, but not adjacent to the first one.

The second Morrow site uses a modular design. Plans for this site Vadata filed with Morrow County included six modules. Another data center Vadata is building in neighboring Umatilla County will be built to a similar modular design, according to a report by East Oregonian.

Vadata’s original data center construction plans in Morrow County that until recently had been on hold were to build it out in six phases (two phases per building), McLane said. However, the company told planning officials that it was possible that some phases would be combined into one if there if the demand called for it.

Vadata has asked Boardman officials to annex its 10-acre Umatilla site, where it is building one of the two modular data centers. The Boardman City Council is slated to vote on the annexation in early April, according to East Oregonian.

An Amazon spokesperson did not respond to a request for comment in time for publication.