Alphabet has spun out a new networking and communications unit based on technologies originally developed for its high-altitude balloon Loon Project.

First reported by Bloomberg, Aalyria is spinning out from Alphabet as an independent company, with its technology offerings originally developed at Alphabet as part of its wireless connectivity efforts, including Project Loon. 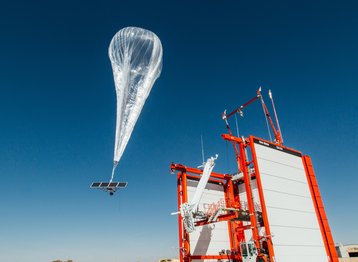 While Alphabet will retain a minority stake, J2 Ventures and several individual investors have also backed Aalyria with an undisclosed amount of money.

“These technologies set the new standard for intelligently orchestrating, managing, and extending mesh networks across all domains - land, sea, air, and space - to create connectivity everywhere – no matter the protocol,” said Chris Taylor, founder and CEO of Aalyria said in a press release announcing the company. “The connectivity on your plane, train, car, cruise ship, space station, lunar base camp, or Mars rover - and anywhere else in the solar system - ought to be as good as it is in your home. We are able to orchestrate cross-constellation inter-satellite links that enable the internetworking of government and commercial constellation providers. We can orchestrate high-speed urban meshes and global unified network operations, and we can help connect the next three billion people. We can do this today – and at scale. Aalyria is the digital cartilage and autonomous brain that allows everything to internetwork.”

Aalyria's debut offering is a network orchestration platform known as Spacetime. The software aims to orchestrate networks of ground stations, aircraft, satellites, ships, and urban meshes. The system was known as “Minkowski” inside Google and was used to connect the Loon balloons and other aerospace assets.

The company claims Spacetime can operate networks in real-time across land, sea, air, and space, at any altitude or orbit type, supports all radio frequency bands and optical wavelengths, and is designed for interoperability with legacy, hybrid space, 5G NTN, and FutureG network architectures.

On the hardware side, Aalyria has developed Tightbeam; a communications module it claims is the ‘world's most advanced’ coherent light-free space optics technology. It was reportedly called Project Sonora within Alphabet and has never before been disclosed to the public.

"Aalyria offers a cutting-edge Software Defined Network capability and optical network technology that is designed to deal with dynamic links, like space to ground, air to air, air to space and every combination between,” said company advisor and former Google VP of Wireless Services, Milo Medin. “The future of communications marries ground-based fiber with space, wireless, and optical links to enable the creation of a survivable on-demand network infrastructure, anytime and anywhere, at speeds that remove the network as a bottleneck. This is critical not just for the future of the Joint Force, but for extending the capabilities of the cloud to anywhere on the planet and beyond where the modern enterprise is delivering value."

Aalyria said its technology presently supports communications networks with up to 15 million possible links and wireless connection speeds up to 1.6 Tbps. The company has already secured an initial $8 million contract with the Defense Innovation Unit (DIU) alongside Anduril, Atlas, and Enveil to help develop secure internet connectivity throughout the space domain for both private and public sector customers.

Former Deputy Secretary of Defense Bob Work said, “Aalyria’s vision and technical approach enables, for the first time, the complete communications and network solution for integrated deterrence. There is nothing else like it.”

Bloomberg reports Aalyria demonstrated its technology by sending a signal from the rooftop of its headquarters to a mountaintop 20 miles away and back. In another test, it sent a signal from the ground to a volleyball-size receiver on an airplane flying about 100 miles away.

“We can deliver 1 gigabit per second to every seat on a plane,” CEO Taylor said.

“I cannot be more excited to welcome Aalyria out of stealth mode today,” Alexander Harstrick, Managing Partner at J2 Ventures, said on LinkedIn this week. “The company is a product of Google's years of work and investment now perfectly positioned to not only change the game in global connectivity but- with data transmission speeds 1,000 times faster than anyone else - reinvent it altogether. J2Ventures is proud to play in a small role in your amazing journey.” 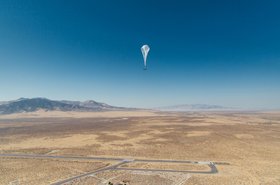 Project Loon began as a ‘moonshot’ idea under Google’s X skunkworks lab in 2011 before being spun out in a separate business unit under parent company Alphabet in 2018.

The aim was to use high-altitude balloons in the stratosphere at an altitude of 18-25 km (11-16 miles) and create an aerial wireless network to deliver the Internet to remote and rural communities.

As well as helping provide connectivity in the wake of natural disasters in Puerto Rico in 2017 and Peru in 2019, Loon ran pilots in New Zealand, Shri Lanka, and Brazil, and managed to achieve a flight duration of 312 days for a single balloon. The company announced its first commercial agreement with Telkom Kenya in 2018.

Google announced it was shuttering Project Loon in early 2021, saying that the project hadn’t found a way to lower costs enough to build a long-term, sustainable business.

“Developing radical new technology is inherently risky, but that doesn’t make breaking this news any easier. Today, I’m sad to share that Loon will be winding down,” Alastair Westgarth, chief executive of Loon, said at the time.

Previous investor SoftBank announced later that year that it was acquiring approximately 200 patents (including patents pending) elated to network technologies, services, operations, and aircraft for High Altitude Platform Stations (HAPS) from Alphabet Inc.'s Loon LLC for its own HAPSmobile unit.

In a separate statement at the time, Alphabet's X Labs said it was making a non-assertion pledge for the free use of 270 patents and applications related to launching, navigation, fleet management, and more to support further work in the field. It also said high-altitude balloon developer Raven Aerostar was taking over a number of patents.

While Google’s now-defunct Loon Project was the most high-profile HAPS project, companies including SoftBank, Deutsche Telekom, Airbus, and BAE are also working on their own platforms to provide high-altitude connectivity.

Vint Cerf has previously mentioned Minkowski (now SpaceTime) to DCD in the context of interplanetary communications, saying; “It is really a very powerful, very clever piece of work... [that] got me very excited because we're still exploring, frankly, the routing protocols that make sense in an interplanetary context.”

As well as Tightbeam/Project Sonora, Alphabet has another separate Loon-related Free Space Optical Communications project, known as Project Taara, which was originally designed to allow the Loon balloons to communicate with one another. Last year Taara beamed 700TB of data across nearly 5km during a 20-day trial project between Brazzaville in the Republic of Congo and Kinshasa in the Democratic Republic of Congo. The 20Gbps system was also trialed in India.

Taara has seemingly been kept separate from the Aalyria spin-out and is still listed as ‘in development’ on the website of Alphabet’s X-Labs skunkworks unit.