Historic building could be used for blockchain

A 109-year-old hydroelectric powerhouse in Great Falls, Montana could be converted into a data center.

Susteen Inc, a design solution provider, has submitted a proposal to turn the historic powerhouse into a 'blockchain' data center. 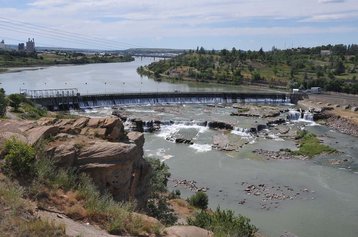 Data center at the end of the rainbow

The Great Falls Tribune reports that on Monday morning a subcommittee of the Great Falls-Cascade County Historic Preservation Advisory Commission announced that Susteen has sent its proposal to Rainbow Powerhouse owner NorthWestern Energy.

No decision has been made yet, but NorthWestern Energy is expected to respond to the proposal this week.

NorthWestern has until July 30 to submit a plan to the Federal Energy Regulatory Commission, outlining whether it will reuse or demolish the building, which is more than 100 years old.

The Rainbow Powerhouse was built between 1908 and 1910 to meet the electric power needs of Montana’s mining, copper production and railroad industries. The hydroelectric powerhouse took advantage of both the water flowing from the Missouri and the drop in water elevation from the nearby Great Falls. The dam is downstream from its namesake Rainbow Falls and can put out 36MW of power capacity, in 2009 the dam generated 268GWh of electricty.

Originally, the dam was built with heavy timber filled with stone. The powerhouse heldsix turbines and generator sets. Amazingly, this timber dam was in operation until 1990 when it was replaced with a concrete design.

In 2013 a new powerhouse was built just downstream of the Rainbow facility; the historic powerhouse was decommissioned the next year. As part of the decommissioning process, then owners PPL Corporation sold the hydroelectric dam to NorthWestern.

NorthWestern has been working with the Historic Preservation Advisory Commission since 2011 to find another use for the powerhouse.

Susteen and NorthWestern representatives met on July 1 to discuss the proposal and the future of the project. Peter Jennings, Historic Preservation Vice-Chair, said the meeting was productive but not without its difficulties: "Susteen presented their plans on a level of detail consistent with the requests for information made by the subcommittee and NorthWestern.

“Based on the fulfillment of these requests, we had anticipated acceptance by NorthWestern of the proposal and a readiness to move forward with the continuing stages of due diligence and planning."

Jennings added: "To our surprise, NorthWestern showed little inclination to move in that direction and expressed the possible preference for demolition. They did specify that the decision had not yet been made."

Jane Weber, Cascade County commissioner, said that the facility is a “perfect place” for Susteen as the powerhouse already provides the security they would need for a data center.

Weber also said: “It’s hard to overstate the value of this to our local economy. The amazing serendipity is that this project preserves an important historic building and landmark, increases our tax base and brings new jobs to our community at the same time.”

Jennings said about the project: "The Rainbow data center, when completed, will be one of a kind. Something only achievable with a unique opportunity. By my research, when this project is done, it will be the only historic powerhouse in the world repurposed for a data center.

"Google has a massive data center right next to The Dalles Dam on the Columbia River, but it is a purpose-built facility."