The Space Race part 2: An opportunity or fruitless exploration?

Does the data center industry have a place in space?

With Tesla, Amazon, and Virgin powering the second wave of the Space Race (which while exciting, is arguably as unwise as the first) we are seeing an increasing amount of public interest invested in space.

The climate crisis is forcing high energy-usage industries to think outside the box, and increasingly consider thinking outside the planet. As David Craig, CEO of Iceotope, points out, “Part of what the UN is trying to do, is do as much of the dirty stuff somewhere else. Do it out there so we are not polluting here.”

The question is – could this creative outlook be applied to the data center industry? We discussed the idea at our DCD>Connect event, with a panel of industry experts. 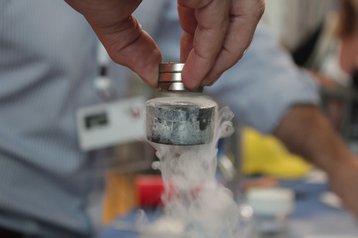 “Assuming project Artemis works on time, by 2050 there will be a data center on the moon, which will be really cool. But it's not that much use for the rest of us. It is mainly for their own infrastructure, it's not like we're going to be sending workloads up there.”

Seb Moss, Editor at DCD, while excited by the prospect of space, cannot be considered optimistic.

“At the end of the day, even with Blue Origin and SpaceX, there's not that much logic putting too much computing in space. Unless it's specifically for space-based compute reasons – a lot of connectivity for low latency applications is being shifted to space.”

This primarily comes down to the logistics of putting computing in space. While on the face of it, getting as much processing power off of our planet sounds like an easy way to prevent continuing pollution... It really isn’t that simple.

“Space: great for generating power, really bad for cooling. If you had superconductors, then it would make a lot of sense to do a lot of computing in space.

“In order to cool things down, you need molecules to bang against each other, but there are no molecules in space. The only way of getting rid of heat in space is through radiation. Right now that works really well if you're the sun, but if you're a satellite it doesn’t work very well, because you’re not very hot.”

Superconductors are materials that have no electrical resistance, and therefore do not produce any waste energy, which in the data center industry tends to come in the form of heat. While an exciting aspiration, this is not currently an option for computing.

I think the demands of a government and community are going to be very different, with the idea of pure individualism being a much less popular approach. We need to be clear that there is such a thing as society, that we do have a moral obligation David Craig

For the time being, it seems unlikely that computing will mass-migrate into space any time soon. But one thing is certain, the industry will have to find a solution to keep up with the massive demand, and the impact this is having on the planet. The newer generations are more aware of the impact of climate change than generations before and this is changing attitudes, globally.

David Craig has faith in the future of humanity, and what this will mean for the data center industry.

“I think the demands of a government and community are going to be very different, with the idea of pure individualism being a much less popular approach. We need to be clear that there is such a thing as society, that we do have a moral obligation. I can see data becoming a utility that's baked into the infrastructure, and to some extent, governments operate and manage access in the same way that you do to roads.”

The future may not be in space, but it does look bright.

Watch the panel talk below to find out what else the future holds for the data center industry, from AI, to a move towards software-based data.