Craig Scroggie, CEO of NEXTDC, sat down with DCD to discuss digital transformation and the major role NEXTDC is playing in the evolution of Australia’s digital infrastructure. 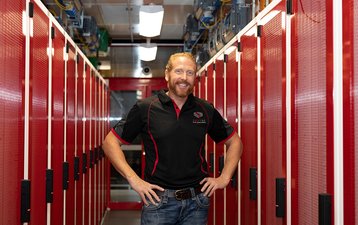 Ahead of his appearance at DCD>Sydney Virtual, we caught up with Craig Scroggie, CEO of NEXTDC. Digital transformation has been a key topic in 2020, particularly when you consider how the Covid-19 pandemic has impacted the world. With Scroggie now responsible for leading one of the world’s fastest growing companies, and one of Australia’s premier data center providers, we wanted to know his thoughts on the future of the industry in this unusual time.

Having taken the reins in 2012, Scroggie has helped lead NEXTDC to phenomenal growth and success for nearly a decade. Here at DCD we wanted to find out what's coming for NEXTDC and what impacts the past year have had on Australia's data center infrastructure and the country's digital transformation efforts.

Founded in May 2010, NEXTDC was born out of a belief that there was an opportunity for carrier and vendor neutral data centers in Australia. In December 2010 NEXTDC was listed on the Australian Stock Exchange (ASX), and in just ten years is now in the ASX 100, and one of the fastest growing technology businesses in the world.

Over the past decade, NEXTDC has worked tirelessly to build world-class data centers across Australia. With a number of Tier III and Tier IV Uptime Institute certified data centers, NEXTDC maintains a footprint across Australia’s major metropolitan areas including Brisbane, Sydney, Melbourne, and Perth. Having grown from a start-up to an organisation with more than $5.5 billion market capitalisation, hey have ambitious - but achievable - plans to continue building data centers across these areas as demand for their services continues to grow exponentially.

NEXTDC has played a pivotal role in the Australian data center market. Scroggie recalls the insights the team gained from their first generation of data centers. This level of infrastructure was deployed in Australia at the time due to its early adopter market status. One thing that Scroggie highlighted was just how massive this growth has been - from single digit MW data centers being considered large orders in places like Sydney and Melbourne, to today where second and third generation data center builds have started to move into strong double digit MWs, and more recently even into triple digit MW data centers; an exponential leap in less than a decade.

“Australia has always been recognized as an early adopter market and an opportunity to trial things for global companies," Scroggie said.

The next part of the journey

Edge has been talked about in the industry for the past few years as the next big evolution for data center infrastructure, particularly with the rise of latency-sensitive applications like augmented reality, autonomous vehicles, and video gaming. How does this work in Australia, which has a mind-bogglingly large landmass with rural and remote communities situated in some of the hardest to reach places on the planet? To answer this question, we must take a step back and look at the Australian market more broadly. The bulk of Australia’s GDP and population exists in Sydney and Melbourne, so it is natural that data center builds in these areas have exploded.

Now, though, many major providers are deploying ‘second regions’ in countries, moving away from the single region model. Scroggie believes Australia will benefit immensely from these second region builds as providers become more aggressive in bringing their services to customers locally. NEXTDC is working to bring its data centers and smaller, appropriately-sized support to regional markets. If we look to other emerging markets across the world, Scroggie correctly points out that many will skip some generations of technologies.

“We'll start to see quite a structural bifurcation of the role that data centers play and the location and design of them."

These network services and technologies will be increasingly important for regional markets in places like Australia where telehealth and other remote services will be of extreme importance to these communities. NEXTDC is working to make its infrastructure assets be ready for increasing demand while remaining flexible enough to react quickly to large-scale, and rapid changes like Covid-19.

With over 640 partners, NEXTDC has been in a continuous cycle of learning and improving its services, processes, and projects. Scroggie puts a high value on the ability to learn - not relying on old processes to achieve things they already know they can, but to improve and continually push the envelope to develop great opportunities.

Scroggie and the team at NEXTDC consider themselves a ‘customer first’ organization, one of their most important values. Working closely with their partners and customers from the design process to final build. Innovation and what NEXTDC called ‘bright ideas’ is central to how they continue to grow. Rather than buying legacy data centers, NEXTDC continually operates based on an idea of continual improvement. Scroggie says they aspire to deliver the lowest operating PUEs in the industry.

Another element of NEXTDC’s work is its strong focus on the environment. Embedded in its culture is a drive to leave the environment in a better condition than which they found it. They are even working towards offering carbon offset programs to their customers. They’ve already invested in solar energy, wind farms, and other renewable technologies - including carbon capture programs. “We are the only certified data center [in Australia] to offset our carbon footprint today," Scroggie said.

They don’t just talk the talk though - NEXTDC is a winner of a number of global awards and recognition around not only its data center builds, but its people and processes, and how it respond to some of the most challenging builds. Scroggie talked about how he and his team at NEXTDC are focused on delivering positive impacts to their customers, partners, and communities. For NEXTDC, this is what they consider the hat-trick of outcomes: operating a better business, doing it more efficiently, and with a lower impact on the environment.

“We want to achieve all of those things, we don't see climate in itself as something that enterprises aren't going to highly value we see it is probably one of the most important things that our customers will care about.”

Where are you headed?

What Scroggie has in store for NEXTDC will be no surprise to anyone familiar with their meteoric rise. A clear vision of where they want to be and what they want to achieve will no doubt be executed with the same innovative thinking that got them where they are today. He added: “We want to continue to really deliver on our vision, and helping enterprise harness the digital age.”

Scroggie says that the job is never done, by focusing on innovation and continuing to build the skills of its people, NEXTDC will continue to deliver better products and continually learn. In ten years, they want to be ten times larger than they are today. A culture of learning and innovation will help take Australia into a new age of digital transformation, and help the Australian economy prepare for an increasingly diverse set of challenges.

“What we built in the company in the last decade is only really the beginning," he told DCD.

You will be able to hear more from Craig Scroggie and his work at NEXTDC by tuning into his major panel: ‘So, what's becoming the new data center 'normal'?’. You can also visit the company's website to find out more about their upcoming projects.