Through landing its biggest project yet, Anord Mardix has proven that when it comes to modular solutions, teamwork (and hard work) really does make the dream work

From a story founded by two family-owned businesses, to now operating as a Flex-owned company in 2021, Anord Mardix has gone from strength to strength over recent years.

So, having been selected to provide $32 million (£24 million) worth of low voltage (LV) switchgear for a large data center in 2020, we wanted to know, why did Anord Mardix win this contract over its competitors?

Anord Mardix was contracted to provide the LV distribution an entire data center site, all the way from the secondary of the supply transformers that interface into the building. Starting at 5,000-amps, the equipment then distributes power all the way down to a 400-amp DATABAR, which in turn distributes power to the server racks within the facility.

This project is unique in that each of the plant room areas consists of a very large open space, and the equipment that goes in (i.e., high-power electrical distribution panels) sits on top of a heavy-duty metal framework called a Power Skid.

The top of this one-meter-high Power Skid essentially acts as the floor of the switch room, with all the electrical support mechanisms underneath it for cabling.

“You divide the room up into about 45 meters long by about 12 meters deep and you basically chop up all the switch gear to reside on individual skids that you fit one at a time to assemble your switch room,” Martin Watson, Hyperscale Technical Sales Manager at Anord Mardix, explains.

We mustn’t forget that until that data center is operational the client isn’t earning any money, they’re simply paying money out Anord Mardix

Doing it this way means you can essentially build a whole switch room off-site, test it, QA test it and do a virtual factory witness test all the way up to level three. You can then wrap it up, ship it to site and bolt it together. The result? A very fast manufacturing process with up to level four (live testing) in a very short period.

Another advantage of this method is the fact you don’t have to build a structure around it as you would with a more traditional build of an empty room. Ordinarily, switchgear would need to be brought in, put on a floor, the cables put in, and after all that you’d have to build a building around it.

Watson explains, “Doing it our way offers a lot of time saving, in that you’re building a switch room essentially in its entirety, off-site, and then chopping it up into pieces… shipping it out to site and reassembling it.”

Not only does building a switch room off-site save time, but this approach turns a traditionally factory-based (lengthy) process into a much simpler modular solution.

When it comes to modular solutions, this isn’t Anord Mardix’s first rodeo, having completed a not dissimilar project in London a couple of years back. That said, the scale of this project is somewhat larger – $23 million (£17 million) larger to be exact.

When taking on the project, Anord Mardix had never done anything of this size before. It’s worth reiterating that the switch room for the Lulea project could, in some cases, be up to 40 meters long by 12 meters wide, with LV switchgear sat on top of it.

And although challenging, this simply enabled Anord Mardix to “Flex” its modular muscles. Building in a modular way is not only more efficient for Anord Mardix, but for the installation team onsite as well as the client, due to the fact equipment needn’t be completely dismantled before it is sent to site, (meaning less tedious reassembly later down the line) and therefore much shorter lead times for a speedier conclusion of the project.

“Another advantage of modularity is that if you need any modifications, or anything regarding the whole structure and not just the electrical equipment you’re testing, you can get it rectified either in a modular form, or traditional form in the factory,” says Watson.

And if you’re interfacing with other bits of equipment that sit on the skids, with a modular assembly, any quality issues or interface issues can be resolved in the factory, which makes sense, considering that’s where all your manufacturing capability, manpower and resources lie.

In contrast, if there were to be an issue on-site, you’d then have to ship out manpower that may not be as specialized as those accessible in the factory, which may add an unwanted cost and time delay that could have been mitigated via modular design.

“From a client’s perspective, a modular solution is beneficial in the sense that, if they’re constructing a building from the ground up, should they want to, they can issue a purchase order, that in the meantime, you can manufacture while they’re still digging holes in the ground,” explains Watson.

Often, switchgear can be ready before the client’s room is ready to accept the equipment, allowing them to shortcut the critical path so they can focus on getting the room ready. Once it is, all they need to do is pick the equipment up, drop it in and cable it up, because the infrastructure for cable support is already in place embedded within the skid structure.

Traditionally you’d have to wait for the client to have a switchboard or switch room built. Then at the earliest possible convenience, drop your switchgear in, for the client to then drop-in all the infrastructure that supports that and the distribution around it, which equates to a lot of people climbing all over your panels.

And, of course, everything is on a deadline, so any unnecessary delays will only add to the client’s timeline and critical path for getting the project complete. On top of that, until that data center is operational the client isn’t earning a penny – they’re simply paying money out.

Due to the sheer size of this project, it brought with it some rather unique operational challenges. For instance, to manufacture the equipment, Anord Mardix first had to upscale its facilities. This involved investing thousands of pounds to install an overhead crane, enabling the skid frames to be welded much faster (saving them on average 12 hours per Skid in production time) which, needless to say, makes for a much more efficient manufacturing process.

Size also meant rethinking transportation, as there are limitations on the width, length and height of equipment being shipped. To mitigate this, Anord Mardix did two things. First, they limited the size of the skids to accommodate the most efficient way of getting from point A to point B, without the need for costly escort vehicles.

Second, with regards to the height of the equipment, Anord Mardix were conscious of making 5,000-amp equipment any smaller due to the need for heat dissipation, so instead, ensured it was delivered on special low load trailers to account for any height restriction.

The time of year also has a part to play. Installation of the project (which is only 68 miles from the arctic circle) was due to take place in February, a particularly volatile time when it comes to weather. Despite weather being a key consideration, Covid-19 shifted the schedule, bringing installation to early June which hugely benefited the process.

In order to prove to the client that they could not only meet, but exceed expectations, Anord Mardix did a large amount of the design upfront, based on the client’s request for proposal (RFP). This early engagement, combined with the sheer amount of time and resources dedicated to the project saw Anord Mardix win the contract by a country mile.

“I genuinely think we wowed them,” says Watson. “We went over as a team at the post tender interview and demonstrated that we’d already designed half the panels, all the interfacing, and showed them all the cable links and electrical interfacing they were going to get.

“Our technical competence, we’ve been told, was way above what they were normally used to, and that our collaborative approach was first in class. We’ve been working very closely with the client to knock our competitor off their pedestal as the supplier of choice.”

When done right, these are the three C’s that can help guarantee success, and Anord Mardix did it right. Rather than simply focusing on their own agenda, they changed parts of their design to accommodate the site electrical contractor and the cable contractor to make it more efficient for them on site.

“It doesn’t make a huge amount of difference to us, but to the cable contractor, it can look like a dog’s dinner if you don’t get the cable interface connections correct. And that’s just one element that’s been helped with modern technology, virtual meetings and collaboration specifically with this client,” explains Watson.

Via virtual meetings, Anord Mardix consulted with the cabling contractor on several occasions, asking for feedback throughout to streamline the process and ensure everyone was on the same page.

Collaboration between vendors and the design team is an essential part of creating a system that’s going to work properly once it lands on site. 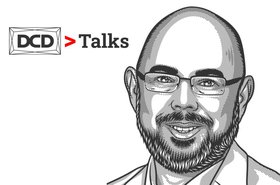 We sat down with Andy Banks, data center sales manager at Anord Mardix, at our DCD connect event to talk about critical power and distribution

“Anord Mardix did a lot of coordination with the vendors last year (2020) regarding how we intended to connect things up, so when the equipment arrived on site, everyone knew exactly what they were doing,” says Watson.

The client themselves were also incredibly collaborative, says Watson, “I can’t speak highly enough of them. They’ve got a superb engineering team and there’s some really good people there that are not just open to suggestions, as far as design improvements and efficiencies, but very helpful in the way they want to help you. We are all going in the same direction.”

And it may seem obvious that all parties ought to be singing from the same hymn sheet, but Watson says this isn’t always the case, “I’ve been doing this 25 years, and sometimes the client, sometimes the consultant, and most definitely the contractor aren’t always going in the same direction. I found this project very collaborative and the team very friendly, not at all hostile like some other projects.”

So, it seems teamwork on all levels really is a key and apparently refreshing approach to a successful project, as well as consistency and commitment to the approach.

“We wanted the client to look at us and think ‘we would be foolish to go anywhere else’, that’s what we set out to do. We’ve continued that level of commitment up to this day and we don’t intend to stop.”