Data centers in times of crisis

Data Centers: An Industry Shaped by Disruption & Change examines how the industry has been impacted by global social, economic and political disruption over the last 20 years 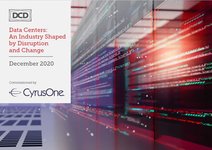 Data Centers: An Industry Shaped by Disruption and Change

This year, the industry has remained resolute and resilient despite the adverse economic conditions across the world caused by the coronavirus (Covid-19) pandemic. In fact, digital infrastructure has gone beyond that, playing a crucial role in ensuring access to critical information and services as well as supporting key parts of the economy. This mission-critical industry has never been more important.

But this current year is in fact just the latest episode in a history in which data centers have had to deliver necessary services despite a series of financial and other crises. At the same time, the dependence of society on data centers has become ever more critical.

The process we now know as digital transformation - in which real world services are increasingly delivered by digital means - has roots stretching back more than twenty years. During that time increased use of digital services has resulted in greater demand for data center capacity. At the same time, people have come to trust and rely on those digital services, resulting in an increased requirement that those data centers, and the services they support, be reliable.

Twenty years ago, a lack of necessary resources was the most critical threat to global data center stability. Without the necessary monetary resources required to operate at a level sufficient to supply global demand, data centers providers were likely to fail.

In the 1990s, increasing interest in the use of the Internet led to rapid investment in Internet-based businesses. However, that investment ignored traditional investment metrics, and this resulted in the dot-com crash, associated with a rapid decline in investment and disillusionment with IT & other digital sectors.

In the next few years, investments declined in digital services and data centers. Enterprises and other organizations where expanding their use of data center colocation, but the colocation sector began to face significant financial hardship, and had to cut back on planned expansion.

The sense of risk around IT, digital, and data center infrastructure stifled expansion. This raised the question of how the data center industry could meet accelerating IT requirements from businesses and consumers, without greater investment?

With building projects delayed, the industry had to meet increasing demand without relying on improved capacity or new data center facilities. Data center operators used a set of tactics including asset sweating, the use of colocation providers, and a move to the cloud where appropriate.

Overall, the industry demonstrated its resilience and managed to serve its markets and grow in the period following both the dot-com crash - and then the 2007-2009 Global Financial Crisis.

The threat of disasters - natural and man-made

Data centers in some locations can be vulnerable to specific threats such as earthquakes, flooding, tsunamis, volcanoes and hurricanes. Climate change is increasing the likelihood of some of these threats, and also allowing them to spread to new parts of the world.

For global data center operators, and those operating in threatened areas, these disasters can represent a significant threat to the operation of data centers, by interrupting the availability of people and resources such as electricity and fuel for backup power.

Our report suggests the total number of disasters has been rising from 60 events per year in 1970, to 320 in 2019. Continuing geological and climate-based risk factors are a significant threat to the stability of data centers worldwide.

Natural and manmade disasters, whether caused by climate change or not, can interrupt access to power, water, networks, staff, and suppliers.

New York has some experience here. In October 2012, Hurricane Sandy struck the Atlantic Coast of the United States. Measures taken by power suppliers in the area took some data centers off line for several days, interrupting access to some critical digital services.

Lower Manhattan flooded, and this interrupted fuel supplies and storage for data centers, throwing out plans for backup power. Overall, the hurricane is reported to have knocked out 300,000 voice access lines, 4.5 million data circuits and 10 cellular towers. Most data centers were not directly damaged, but their ability to operate was affected by limited access to necessary power and fuel.

A decade earlier, New York had already upgraded the reliability of its networks following the 9/11 attacks. The localization of facilities and assets was identified as a key problem, and infrastructure supporting New York’s Financial District was shown to be vulnerable to interruption. A more dispensed approach to network distribution was taken almost immediately to ensure business continuity in the face of significantly disruptive events.

Over the last two decades, the data center industry has faced many crises, and has used many of these situations to learn and adapt. The underlying goal has always been to deliver reliable services, but at each step new lessons have been learnt, from better network architecture through improved backup, to more solid financial management.

Download the full report, including our observations of how the data center industry is currently responding to the pandemic and the likely long-term impacts on the industry.