If data centers don’t immediately spring to mind when you think Fujitsu, we’re going to tell you why they should

If the global ICT space had a walk of fame, Fujitsu would probably be on it; having been providing a full range of technology products, solutions and services to customers around the world, since 1935.

This sort of industry experience isn’t something Fujitsu takes lightly, using this expertise combined with the power of ICT to help shape future society alongside its customers, continuing to innovate and trailblaze on an international stage.

But despite being such a well-known and trusted brand, there is one area of the business that might not immediately spring to mind when you think Fujitsu (although it should) and that’s data centers.

Globally, Fujitsu has over 120 data centers, with six of these state-of-the-art facilities located in Australia (three in Sydney, one in Melbourne, one in Brisbane and one in Perth) made up of three hyperscale and three colocation facilities in order to cater to Fujitsu’s diverse range of clientele.

Hyperscale by design, these three data centers are perfectly equipped to cater to very high power rack density setups as well as their associated environments. Rather than servers in small cages, Fujitsu is providing suites housed inside sprawling data halls ranging from 500 to 1,000 sqm, with vast scope for expansion and scalability.

At the time of writing, Fujitsu’s largest Australian hyperscale facility – totalling 92 MW located in Sydney – had around 5 MW of available UPS capacity, as well as boasting an enviable location right in the middle of Sydney’s hyperscale corridor, with neighbours the likes of industry giants Amazon, Microsoft and Digital Realty.

This facility is located east of Melbourne, and although most data centers tend to reside in the west zone, being away from the crowd mitigates the associated risks that come with being in the bubble that is Melbourne CBD.

Located in Perth, this is the “smallest” of Fujitsu’s hyperscale facilities, but still packs an impressive 10 MW capacity, of which there was 3 MW available at the time of writing. 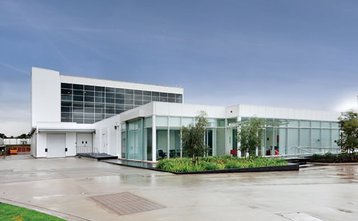 For smaller retail customers, two to five megawatts in IT capacity is about right for a data center, and Fujitsu has three of these, one in Brisbane and two in Sydney. Usually these kind of customers are only seeking a couple of racks, so nowhere near the sort of capacity you’d expect to find in a hyperscaler ­– testament to the diversity and flexibility of Fujitsu.

And none of this is a secret, all six sites have been operating in the market for over a decade and are well known to the industry. The advantage of being an industry ‘face’ means these facilities are incredibly well connected by different local and international carriers. So in terms of a fibre dense network, Fujitsu can be proud that all six sites are served by 10-12 connected carriers.

In addition to unrivalled connectivity, some of the sites also feature internet exchanges, which is of course an added value asset to any data center.

And despite having its fingers in many proverbial pies, right now, the biggest focus for Fujitsu lies within the wholesale space. At one end of the scale, these clients are traditionally looking for approximately 100 – 200 kw setups. At the other, and perhaps less traditionally, you have hyperscalers interested in dipping their toes into this market for the edge opportunities it presents.

As an established and respected ICT provider, with the processes and knowhow surrounding data center technology, Fujitsu has many USP’s within the data center space some may not be privy to.

As well as in-depth knowledge surrounding the technology that goes into a data center from the perspective of a system integration company, Fujitsu has the added benefit of its own system integrator (SI) capabilities.

This SI capability sees Fujitsu implement much of its own branded equipment – from servers to hypercompute infrastructure. As well as its own capabilities and infrastructure, where applicable, Fujitsu also utilizes third party hardware from fellow trusted companies the likes of Dell, HPE and Nutanix.

And to put into perspective the IT prowess at play here, Fujitsu actually built Fugaku, one of the most powerful supercomputers in the world today, located at the RIKEN Center for Computational Science in Kobe, Japan.

In Australia, the company has done similar modern work with ANU (Australia National University) which also houses a supercomputer borne from Fujitsu.

Fujitsu recognises that different companies have very different needs, so approach each client on an individual basis, presenting to them a holistic view of their data center project Fujitsu

Within the wholesale space, there are a myriad of different companies, from manufacturing to gaming. Fujitsu recognises that different companies have very different needs, so approach each client on an individual basis, presenting to them a holistic view of their data center project.

They really dig deep, asking the right questions to ascertain what the client is looking to achieve, taking the time to discuss goals and objectives before even touching upon hosting – that comes later.

This conversation starts way before that of your average hosting provider or data center company, which traditionally don’t tend to get involved until the customer has made up their mind about what technology and what platform they want to build, then, they will start looking for a hosting provider.

But before starting any project, the foundations must be in place. What do you want to achieve? What solutions do you need? What hardware? What kind of design? Then and only then will Fujitsu go ahead and build a solution around specifically selected hardware to meet that particular customer’s objectives, after that, talk of hosting capabilities can begin.

As far as Fujitsu is concerned, there are three main stages to the process. First they will design a solution, using either their own hardware or that of a trusted third party. Second, they bring it all together and install it in a rack, in a data center, managed by Fujitsu and owned by Fujitsu.

Third, is the value gained from putting infrastructure into a data center. People of course want to extract the true value from their data and glean as much information from it as possible. This also encompasses Fujitsu becoming part of the security platform, building customers a secure environment where they feel safe putting their data. Cybersecurity is one of the biggest areas in the market today, with Fujitsu one of the few publicly known SI companies in Australia dealing with federal and defence contracts.

In summary, Fujitsu becomes a whole road map for these customers. They design a solution encompassing the hardware, data center, connectivity and security surrounding it, as well as the ability to assist with drawing the true value and analytics out of customer data. This provides a true 360 degree experience for the client that goes far beyond just the data center or hosting capabilities.

Rather than just focusing on the outcome, Fujitsu wants to enable its customers to build their own capability, through recommending the right solutions. Take a large enterprise like a bank for example. Many of these types of organizations have their own on prem data centers, which worked just fine in the past when the requirement per rack was much smaller (due to there being far less data flying about.)

Fast forward to today, and the proliferation of hypercompute infrastructure and social media has these big companies realizing their facilities are no longer fit for purpose, and are taking more and more investment to keep pace with the market, not to mention the actual power requirements, which shouldn’t be understated.

Therefore it’s a far better option for these organizations to place their data into a purpose built third party facility, where they’re getting a whole ecosystem of digital players in one place. So not only the data center itself, but multiple network areas, public cloud providers, internet exchanges and contingency providers.

Rather than just focusing on the outcome, Fujitsu wants to enable its customers to build their own capability, through recommending the right solutions Fujitsu

Fujitsu also happens to be just a handful of global data centers certified by NVIDIA. As well as building chipsets for both mobile and desktop, NVIDIA has recently launched its GPX – an AI led graphic processor unit – an advanced analytics platform. Fujitsu is one of the limited companies validated and certified to host this incredibly power hungry ‘superport’.

This partnership with NVIDIA also means Fujitsu is one of a limited number of certified system integration companies that can go and talk to the end customer about what NVIDIA platform they should be looking at as a certified reseller. Fujitsu can support customers on both sides, in both deciding what platform to buy from NVIDIA, as well as where to deploy.

Fujitsu is there for the whole of the data center journey, from pre to post deployment, with an array of future ready, state-of-the-art NABERS (National Australian Built Environment Rating System) certified sustainable data centers in a variety of shapes and sizes to cater for even the most demanding of workloads.