Can the data center industry keep up?

Technology keeps developing, and data centers need to develop with it

In the data center industry, we have a tendency to get a little Top Gun with our “need for speed”.

But, like ‘Maverick’, the character played by Tom Cruise, some of that reckless abandon is needed in order to keep up with an industry that changes so rapidly.

At DCD’s recent Tech Innovation Day, we sat down with some experts to talk about the current climate that data center operators are working in, and the challenges facing the industry in terms of velocity.

Amy Daniell is the Director of the Hyperscale Team at NTT, and has been working in the industry for the last decade, a decade in which everyone in the industry can attest to the scale of growth and demand we have seen.

“If I've got any spare capacity anywhere in the world [to build a data center] at the moment, it is generally taken up in milliseconds. It is ridiculous. We're building a campus at the moment that we thought we would grow over 10 years, and it's all completely built out in under three.

“Landing sites has been a challenge for all of us in the industry for a long time: finding a site with some power or, even better, finding a site that's already zoned with power - now you're getting to the golden nugget of what we're all trying to find, the unicorn. It is impossible at the moment to try and get into any of the key big markets that we see globally.”

Acquiring the right sites is not the only big issue.

“First, people are retiring out of the industry, and we haven't really got new people coming in behind them. It's far too enticing to go and join the banking sector or something far more lucrative than the data center industry for the young engineers who've been coming out about Graduate University programs.”

“First, people are retiring out of the industry, and we haven't really got new people coming in behind them. It's far too enticing to go and join the banking sector or something far more lucrative than the data center industry for the young engineers who've been coming out about Graduate University programs.” Amy Daniell

Jeffrey Paliga, Director of Business Development at Panduit, has seen this rush accelerate in just the past two years.

“Things were always at a pretty fast pace, but I think when the pandemic hit a lot of those plans either went out the window or were accelerated tremendously. There was a lot of uncertainty. Folks had to drop the old designs, despite the natural habit being to go back to the design that worked in the past when you are under pressure. People have entirely rethought the design and the process of putting their data centers together.

“Fortunately, I think a lot of our customers were in pretty good shape. They were able to expedite or actually put in motion parts of their hybrid IT strategy that they thought had another three to five years to go, and they got pulled together in 12 to 18 months. A lot more communication and a lot more sharing of knowledge really forced everyone to rethink what they were doing along the process, how they specify where they locate their applications, and what the designs look like.”

One thing that has been seen across the board is that the industry has been complicated by demand and a technological landscape that refuses to stay still. Technology changes at such a rate that we can only begin to hope it may eventually reach a terminal velocity, and the standard business model approaches cannot keep up. 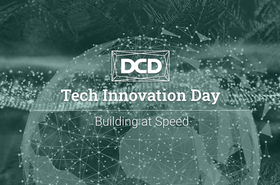 Conference Session Panel: How do we deliver on the need for speed?

“We want McDonald's, we want to build the same hamburger over and over for many, many years anywhere in the world, and what we're doing in the data center industry is the exact opposite. We have to adapt to an ever-changing condition.

The current approach, attempting to keep up with the moving technological landscape, brings with it natural risk, he says: Risk of becoming outdated as technology continues to move ahead of you, risk of failed exploits. With this risk, you need the capital and the drive to keep pushing the industry forward. It can be hard to keep up, but the revolutionary impact data centers can have on the future will be all so worth it.