Anord Mardix CEO James Peacock tells DCD about the company’s expansion plans, the virtual factory testing facilities it has set-up, and why people development is so important

They’re taking the critical power industry by storm, but neither Anord, nor Mardix originally started out in data centers. Anord Control Systems was founded by the Nordon family in Dundalk, Ireland in 1969. Starting in the water treatment business, it later expanded into broader engineering, including switchgear and power distribution units (PDUs), also getting involved in the nuclear industry and doing work at the Sellafield nuclear power plant in Cumbria. 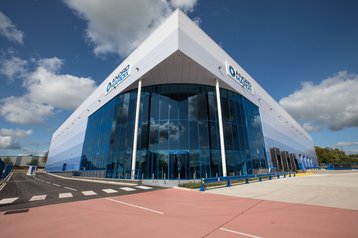 Mardix, meanwhile, was founded in 1966 and was based in Kendal, not far from Sellafield. On merger, it was the largest UK-based manufacturer of critical power equipment, including low and medium-voltage switchgear, power distribution units, busway systems and packaged substations, busbar transmission and modular data hall busway systems.

Anord’s and Mardix’s paths first crossed at the Canary Wharf development in London in the 1990s. Both companies won contracts in the data centers of banks, such as Credit Suisse, while Mardix also became a supplier to a number of telecoms giants, including BT and Vodafone.

As the two companies grew, Anord looked west and sought to break-in to the US market, establishing manufacturing facilities in Richmond, Virginia, while Mardix looked east, across Europe and to Asia.

In 2017, the two companies were put together by private equity investor Bertram Capital in two separate deals – first, with Anord Control Systems; then, just over six months later with Mardix. At the time, Bertram managing partner Jeff Drazan told DCD that the aim was to develop the merged company as one of the “best of breed companies”, as the sector of data center equipment consolidates. 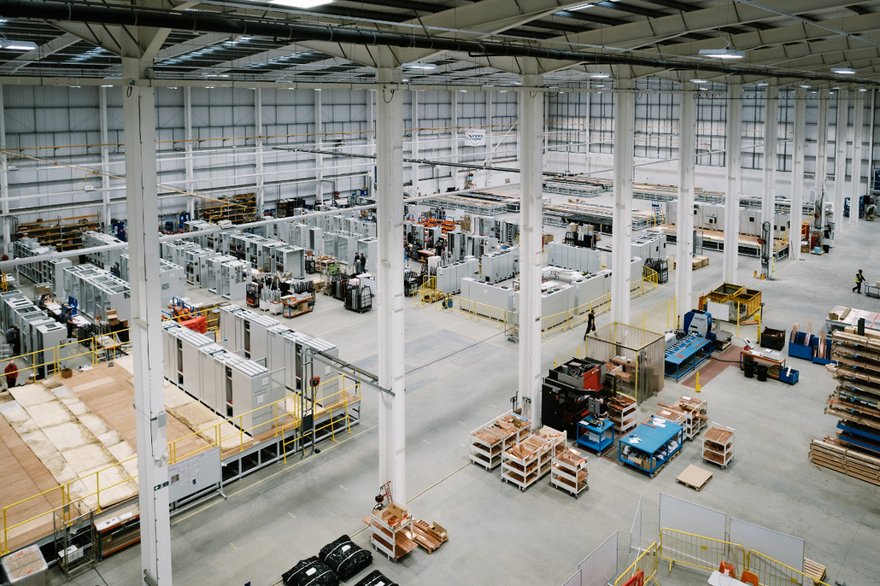 Bertram Capital, meanwhile, has put more than $30 million in capital investment alone into Anord Mardix, as well as injecting some business knowledge and know-how to help the company develop and grow.

In an interview with DCD, James Peacock, CEO at Anord Mardix, told us about the development journey the company had been on with Bertram over the past 4 years, “They’re predominantly financing [and] providing structure to support growth. Bertram is based on the West Coast, San Francisco. They’ve had investments in the data center sector before with Power Distribution Inc (PDI), a US company that they went on to sell for $235 million.

“[Before the merge] Anord and Mardix were individual, private owners of businesses that were growing at a huge scale. Ultimately, Bertram brought with them a world-class, global vision, which, when combined with our passion for the industry and personal touch to clients, enabled the business to progress to the next level.”

“What private equity brings for us, as we look forward into the future, is the leverage to achieve scale in a disciplined and controlled fashion. It allows us the flexibility to adapt to and meet market demands, all whilst cementing ourselves in the industry as a key player and maintaining the brand that our clients love.”

So far, the growth in the company’s business would appear to have justified those deals, both for Anord Mardix and for Bertram Capital.

What private equity brings is the mindset of how to leverage to achieve scale without major risk, and to do it in a disciplined, controlled fashion James Peacock, Anord Mardix

“We’ve got the biggest order book we’ve ever had and probably need another investor to take us from $400 million to five, six, even $800 million over the next four or five years,” says Peacock. With the data center industry growing at an annual rate of around 15 percent, a par growth rate ought to make a doubling in revenues over five years perfectly achievable.

However, maintaining such growth will require equipment suppliers to be present in the fastest growing regions and able to support the world’s fastest-growing data center operators, such as Equinix, Vantage, CyrusOne, Digital Realty and other big name players.

More than anything, though, major data center operators in one market are moving into new markets and want their suppliers to move with them, hence the rush by companies like Anord Mardix to grow and globalize accordingly.

“The EMEA market is pretty steady. We’re a relatively new company in the US, but we’ve got great opportunities there and great routes to market… For the next steps, we want to expand our presence in Asia because that’s probably the fastest growing market.

“In Asia, we’re looking to set-up our own manufacturing facilities. We’re experiencing greater need for a facility and predict further established growth in the near future. Our customers will take us there because they trust us, and we’ve got a track record of delivering,” says Peacock.

Ultimately, he adds, the major data center operators want to standardise their equipment as far as possible across the world in order to drive internal efficiencies, as well as, of course, the best possible prices from suppliers – but they have to be suppliers with strong track records and prospects. In the data center business, reliability is always the number one priority.

We’re looking to set-up manufacturing facilities in Asia, our customers will take us there because they trust us, and we’ve got a proven track record of delivering James Peacock, Anord Mardix

Like any other organization, Anord Mardix has been challenged by government responses to Covid-19.

Unlike many businesses, demand in the data center sector remained strong throughout 2020 so the company had to work out how to maintain output in a number of ways: first, in terms of sourcing raw materials despite the disruption to global supply chains; and second, manufacturing its own products while remaining within the various rules on social distancing.

Both, in many respects, were challenging tests of management that the company not only passed, but exceeded in.

However, for many customers procedures will have changed, and Anord Mardix had to change with that. For example, many buyers, pre-pandemic, will have visited the company’s facilities, either before ordering or before the products they had ordered leave the factory. Over the past year, with a trip to Dundalk, Kendal or Lancashire out of the question, Anord Mardix had to adapt.

“Our factories couldn't stop. And they never did, we never closed… If we’re building a hyperscale SKID-mounted, modular data center or we’re integrating control systems, they want to see that work and test it.

"We want to showcase our products functioning as they would onsite; testing our product in real time gives our clients the confidence that, when it leaves the factory, it’s as close to plug-and-play as possible. If tweaks are required, the factory is the best place to do it. We can be reactive and effectively adapt to our client’s needs while the product is still at the site of production, rather than on-site.” 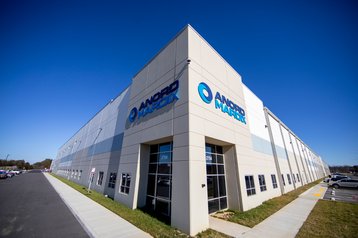 Much of this had to go virtual throughout 2020, and still is for many clients.

“We introduced a lot of new technology over the past year so that, now, customers can do virtual factory tests. This means that clients can still have the full purchasing experience despite travel restrictions; they get to see their products in action and get a feel for the quality and product specifications they asked for” says Peacock.

“Today, at our hyperscale Blackburn [Lancashire] manufacturing facility we’ve got around 18 Power Pods for two different clients and they’ll want to see them being tested and put through their paces before they are delivered because, in essence, everything we can do in the factory reduces time on site - which saves money and enables the data center to go live much faster” says Peacock.

The next stop for Anord Mardix will be Asia, with the imminent establishment of a factory that will almost certainly be in Singapore

“We’ve already got some large scale projects in Asia at the moment. But, one of the most important things for us is speed to market. When you’ve got four or five week shipping times it’s clear that we need to reduce that and also be able to scale-up, in any case.

“I think it will be some point in late 2021, into 2022. We've already got a sales office in Singapore and some local partners, but we need to be on the ground to deliver our product and have the capacity to manufacture locally to reduce lead times,” says Peacock.

That, of course, won’t just be good news for customers in the region, but also for young and ambitious engineers in Singapore with an eye on a career in the data center sector operating at fast growing global level.

Developing and nurturing talent from within

While Anord Mardix plans to expand its global reach through the Asian market and beyond, as revenues near-double in the three years since Anord and Mardix merged, CEO James Peacock tells DCD the company remains determined to maintain a small company ‘feel’, with a continued emphasis on apprenticeships and promoting from within.

We have a regular intake of apprentices spread across many disciplines, whether that's on the assembly teams or bus bar teams, we've even got apprentices in our design departments James Peacock, Anord Mardix

“We have a large apprenticeship scheme of 30 apprentices across the UK and Ireland, with a regular intake spread across many disciplines. We encourage a self-starter work ethic and enthusiasm across the business, whether you’re an apprentice or not, working on the assembly teams or in the offices.

“We have a team of market leading individuals each bringing something unique and diverse. When we advertise any position, we want people to know our business, our products and our culture; our DNA – people who have got our can-do, will-do attitude. The opportunity for growth is there for people that want it and believe in our brand – we've currently got apprentices in our design departments supporting on live projects.” says Peacock.

“Someone may be looking to enter the industry, who is willing to work hard and put in the hours, and is willing to commit to their career, but may not have the qualifications needed.” Peacock says.

“But, we’re always willing to mentor the right candidate and enable them to progress within the business to become whatever they want to be. We promote from within, as well as picking talent from universities, colleges, and those who have dedicated their careers already to achieving engineering excellence.”

“I know this first hand. I started on the factory floor as an apprentice engineer and from there, made it into sales so I worked my way up. This is why I know how important it is to keep people happy and maintain a rich working environment, because without our team, we might have the best product, but if we don’t have the people we don’t make anything.”

Not only have staff throughout the company – on both the Anord and the Mardix sides – worked for the combined brands for decades, but “we’ve got grandfathers, fathers, sons, uncles and aunties in our business who are local to the Lake District, Lancashire, to Virginia and to Dundalk. They have defined our DNA and been part of creating a family feel environment, yet operating at a global scale – and that’s how we tend to generate and attract our people,” he adds.

With the business adapting to changes over the past year to retain client satisfaction, as well as securing a record number of orders with sights set on expanding into new territory, Anord Mardix is keen to encourage talent, skillsets and recruitment in the data center sector and beyond.