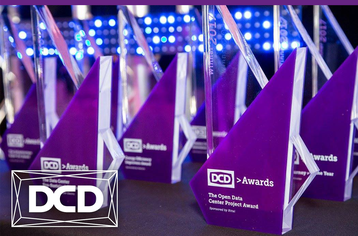 Every year, DCD Asia Pacific organizes an Awards evening that celebrates the industry’s most cutting-edge projects, most dedicated teams and most talented people. The gala dinner and awards ceremony will to be held at the Marina Bay Sands in Singapore on September 17th in conjunction with the DCD>Singapore conference.

An initial pool of almost 130 starting entries has been whittled down to 35 as the five finalists in each of seven open categories were announced on 15th August at DCD>Sydney. The shortlist has been selected thanks to the efforts of an expert team of 24 independent judges who studied the entries and scored them on a number of attributes. Three individual Awards - for Data Centre Manager of the Year, Business Leader of the Year and for Outstanding Achievement will also be announced in Singapore.

“We have expanded the number of Awards categories in the Asia Pacific this year and this has created the momentum for a greater number of entries from more markets across the region. We have finalists from China, India, Australia, Singapore, Malaysia, Bangladesh, New Zealand, South Korea and Thailand indicating the extent to which the region as a whole is growing and maturing in the face of the challenges posed by business and social transformation”, explained Tom Winter, Managing Director of DCD Asia Pacific. “We wish the finalists luck as they complete the final entry stage as I speak, and we thank the judges who will look at the entries for a second time to select the winners”.

The Edge Data Center Project of the Year is awarded to the project that best demonstrates a unique and strategic approach to housing IT at the ‘edge’. Finalists are:

The Enterprise Data Center Design awards goes to the entry that best addresses the challenges of meeting single company’s specific needs and adapting to those needs as they change. Finalists include:

The Multi Tenant Data Center Design award is given to the project which has pushed the boundaries in terms of design and construction in delivering a building that overcomes any unique challenges. Finalists are:

Hybrid IT Project of the Year

The award for Hybrid IT Project of the Year recognizes the project that uses available resources most intelligently to provide organizations with more agility, availability, improved risk profile and better corporate outcomes. Finalists include:

In the Energy Smart category, the award is given in recognition of the region’s most energy-aware and innovative approaches to building sustainable digital infrastructure. Finalists include:

Data Center Operations Team of the Year is awarded to the team convened for a special task which has done most to go above and beyond the call of its day-to-day operations. Finalists include:

The Data Center Construction Team of the Year award is given to the team which has most shown commitment and initiative in their building project to deliver an outcome better than expected. Finalists include:

To learn more about the Awards, the finalists and about the Gala Dinner on 17th September at the Marina Bay Sands, please click here.

We look forward to welcoming you to a very special evening!