Whose DCIM data is it anyway?

It is fair to say that data center infrastructure management (DCIM) software hasn’t quite lived up to its initial hype.

True, adoption is increasing and operators are less skeptical of the potential of DCIM than in the past. However deployments haven’t hit the kind of levels that many suppliers had hoped for. According to a 2016 survey by Intel and Dell, just over half of operators used some form of DCIM at the time.

Long sales cycles, uncertain return on investment (ROI) and complexity have stymied adoption, as has the lack of clear definition of what DCIM software is exactly. The whole notion of DCIM still attracts criticism in some circles. 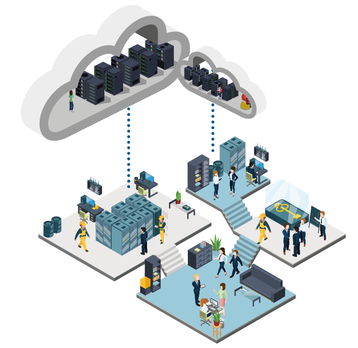 “We took our time analyzing the situation and in hindsight not jumping on the DCIM train hasn’t been a bad outcome considering how much investment some of the others have done,” said Tatu Valjakka, product owner for connectivity and interface products at Eaton. “There are quite a lot of DCIM companies that have already perished in the market.”

While Eaton resisted entering the DCIM space fully, it is one of a small number of suppliers offering a new class of data center management tools that could overcome some of the issues that have held back DCIM adoption to date.

Data center management as a service (DMaaS) – a term coined by 451 Research - essentially moves some of the functions of on-premises DCIM to the cloud. This includes some of the remote equipment monitoring, power and environmental monitoring as well as data management and reporting functions.

The DMaaS tools that have emerged to date will probably be used alongside existing DCIM or building management system (BMS) tools which don’t as yet provide capabilities such as IT asset management, an important feature of DCIM, or the kind of control capabilities provided by a BMS.

However, they do enable a number of additional capabilities made possible by the scale that cloud and big data analytics brings. To date, only a few of the more than 60 suppliers of DCIM have launched DMaaS services but others, such as Vertiv (previously Emerson Network Power), are likely to follow if the initial platforms prove popular.

Eaton launched its DMaaS platform in early 2016. PredictPulse is essentially a cloud-based remote monitoring tool. It is only available in the US to date but enables operators to view real-time power diagnostics, using online dashboards and mobile applications.

Schneider Electric is also one of the early pioneers of DMaaS. It launched its StruxureOn service in 2016 but subsequently rebranded it to EcoStruxure IT in mid-2017.

Essentially, EcoStruxure IT collects data from multi-vendor (not just Schneider) infrastructure equipment and stores it in the cloud. The data is then aggregated in what is described as the ‘EcoStruxure data lake’ where it is processed and analyzed.

As with some on-premises DCIM tools, users are able to receive alerts and other monitoring information – using a smartphone for example – on how equipment in a specific data center is performing.

But the real value-add with DMaaS is that data harvested from all the users of the service – in Schneider’s case 1,000 customers with more than 100,000 cross-platform connected devices to date - is aggregated and analysed using big data analytics and machine learning. This enables new capabilities such as a user being able to compare the performance of a facility against global benchmarks.

Another benefit is the ability to use historical trending data, or the data on the performance of multiple pieces of equipment, to more accurately predict when a device may need to be serviced: so-called predictive maintenance. Eaton and Schneider’s platforms both provide this capability.

“We are able to predict incidents before they happen,” says Schneider’s VP and GM of data center software, Kim Povlsen. “We can call the customer up and say ‘Hey, you might have a problem tomorrow based on what we have seen week over week at your data center’.”

On-prem or off prem?

But despite the additional capabilities that DMaaS can bring compared to on-premises DCIM, some operators still want to have dashboards and access to monitoring data locally, says Povlsen. For those customers who want to fully retain control over their infrastructure and not send any data into the cloud, Schneider is continuing to support its StruxureWare for Data Centers platform. “We know that there is a large customer base out there who still prefer to stay on premise,” says Povlsen.

Another reason that customers may prefer purely on-premise DCIM to DMaaS is concerns about data privacy and security. However Povlsen argues that the data that Schneider is collecting has limited value to a potential criminal or hacker so customers shouldn’t be overly concerned. “We are only monitoring the machine data – UPS systems, PDUs, cooling units - from the critical infrastructure,” he says. “So things like temperature and power, that is all we do. So you could say that it is relatively useless data if you don’t know what to do with it.”

Even so, Povlsen is adamant that the customer retains ownership of the data collected by EcoStruxure IT no matter where it is located. “The data is purely owned by the customer,” he says. “If the customer wants to leave the platform and have their data removed then we will make sure that it is.”

Instances of customers requesting to have data removed are rare however. “It is something we offer but it is somewhat a rare occurrence but for us it is important to let the customer know that they are in charge,” says Povlsen.

Eaton’s Valjakka agrees that data security and privacy is not such an issue because of the kind of data being collected. “I would say the data ownership issue is more pressing when you have actual workflow data, people data, operational data. We just collect the internal workings of UPS systems,” he says. But, that said, it is customer owned and we will use it for prediction, for developing the models, feeding some of the insight into product development but we are not selling the data to anyone or making money out of the data directly in any way.”

But while DMaaS suppliers appear to have a tight rein on issues around customer data, the technology also raises some other data ownership questions. For example, as well as being able to glean useful data on how its own equipment is performing in a customer’s site, Schneider is also able to gain similar insights into equipment from rival suppliers.

Since Schneider is able to aggregate data from potentially thousands of pieces of equipment, this could provide insights that even the rival supplier doesn’t have access to. “We are thinking about what we can do,” says Povlsen. “As of now we don’t see any explicit value in sharing this data with our competitors.”

The ultimate end game for DMaaS could be for Schneider, Eaton and others to extend cloud-based monitoring capabilities to include remote control of specific equipment or all of the M&E systems in an entire site or group of facilities.

But according to Povlsen it is not an immediate priority. “It is on the far end road map. We want to be very careful about these things. Right now we have a strict policy around one-way data direction in order to provide the proper level of cyber security.”

Ultimately, DMaaS has a number of advantages over traditional DCIM tools but despite the assurances from suppliers there will be some operators who are just not ready to share data with the cloud. The reality is that DMaaS will make sense for a certain group of users and it will most likely be used alongside traditional DCIM for now.

Over a longer term, however, the idea of a supplier providing full remote monitoring and control of specific equipment, or an entire site, could prove very persuasive for progressive operators - as long as ownership and control over data continues to remain clearly defined.