Before the formal opening, DCD got a tour of the new facility 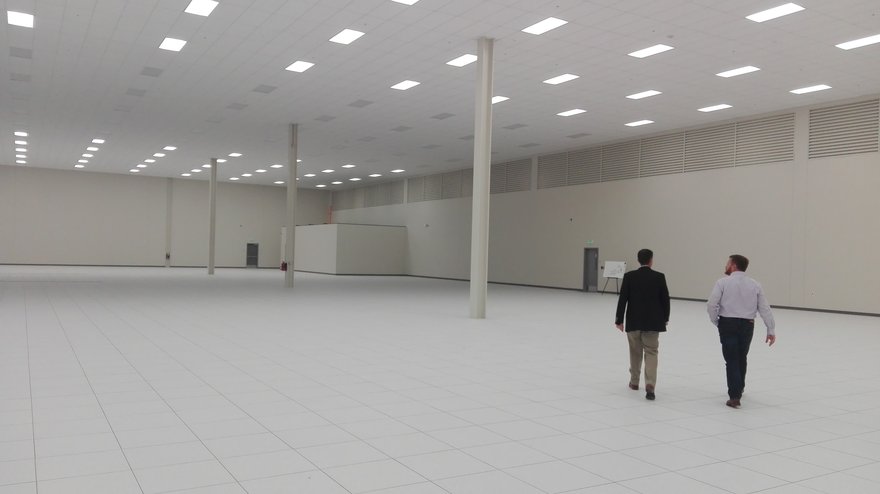 You know the smell of a new car? The new ViaWest data center in the Dallas suburb of Plano has it. The site hasn’t yet had an opening ceremony, but DatacenterDynamics got a preview on a visit to Texas.

This is ViaWest’s fifth so-called Generation Four data center. It’s a purpose-made building and could have as much as 148,000 sq ft (14,000 sq m) of raised floor when fully built. At present there’s 60,000 sq ft built, and that makes for a vast empty hall. It’s spotless and, as we say, it has new-data-center smell.

Like all data center visits, our Plano trip started with handing photo ID in at a security desk. The company had our passport till we left the building. Next, Tom Myers, regional vice president, ushered us through a man-trap airlock entry, before we found ourselves in the “human friendly” space, with meet-me offices and a kitchen. Customers arrive, will be able to take disaster-recovery options, including the use of temporary office space in the building.

For now, there are no customers in yet, so we got a thorough tour. At each stop, our guides needed a card and a fingerprint to get through to the next section of the building. Along with the infrastructure, physical access is monitored in real time through the access systems and with video surveillance.

After coffee in the kitchen, our first stop was mezzanine-level board rooms with a view across the data center floor, which looked every bit as new and sparkling as we would expect. There’s highly efficient LED lighting in the ceiling, so customers will be able to see to work within their cages. The lighting systems are powered from the regular power feed, with their own power conversion.

This is a giant space, but it’s for retail colocation, not wholesale. ViaWest promises the site will have a power usage effectiveness (PUE) of 1.3. That wouldn’t be a cutting edge figure for a wholesale site, or a facility built for one user, but it’s a very good number in retail colocation, where the cages on the floor could contain any manner of equipment, with diverse power and cooling requirements. Given those limitations, this is ”among the lowest PUEs of any colocation facility in the industry”, Myers said.

In many ways, this is a traditional raised-floor facility, but pushed to the limit. There’s a 24 ft high ceiling space, and a single strengthened underfloor area with minimal barriers to air flow. The idea is for a lot of air to move slowly through the system, and there’s no aisle containment. Cold air is fed from modular chillers through a plenum into the underfloor area; most of the floor is well sealed, so the air only goes up through the equipment to cool it. Warm air at around 23C (75F) drifts out through side vents. “No containment is needed,” said Myers, “it’s expensive.”

Each cabinet can have 18kW to 20kW, a density of 700W per square foot. Customers pay per kWh used.

We were shown to a power room, currently holding enough equipment for the first phase of installation. One design feature is that power conversion happens within this power room as far as possible, instead of on the data center floor. That’s because power conversion can happen efficiently at high temperatures, so putting it in a cooled area is a waste of energy. The power is being added in stages.

The battery room is isolated so it can be cooled separately to its own ideal temperature.

Outside the building there are backup generators and cooling systems, installed in areas protected by walls and crash barriers. Again, the capacity is installed for the first phase, with plenty of space for more. The chillers are commerical off-the-shelf models, using water and an economizer. ”We use free cooling when conditions allow it,”  said Myers.

The whole facility is certified by the Uptime Institute for Tier III resilience, both design and construction. That’s an important distinction, apparently, as not many sites in Texas have been certified. There are plans for up to 29MW of redundand diesel back up and 18MW of battery UPS.

“Texas has great prevailing market conditions,” said Myers. “In the last year, the Dallas Forth Worth region grew at 3.3 percent, which is 1.5 percent higher than the rest of the US.” The state has its own power grid, separate from the US East and West grids, giving it a stable energy supply. It also has good fiber connections with the East and West coasts.

With all of this in its favor, Dallas is one of the largest metro regions in the US for data centers: ”It makes a lot of sense,” Myers said.

The state has a strong tech history, going back to Texas Instruments, which developed and made electronics in the state since 1951. These days, it has no state income tax, preferring to levy a higher sales tax, a factor credited for bringing in new tech companies and producing an employment explosion.

ViaWest already has eight Texas data centers, but each new one pushes the design forward a little. The Plano site can offer up to 700W per square foot, with redundant power and cooling. The company offers a 100 percent service level agreement (SLA) for power, bandwidth and network services availability.

The formal opening is scheduled before the end of the year, and Myers is confident customers will come in. Overall, the impression is of a data center built to impress.