Whatever else you say about Quebec-based Vert, it’s got a fine name, that works in both of Canada’s languages.

Vert means “green” in French, and indicates ”vertical” in English, summing up the company’s big idea: multi-story, energy efficient data centers. Vert won a US patent for multi-story modular data centers in February, and the company’s CMO, Philippe Savard, explained to DatacenterDynamics why this is such a big idea. 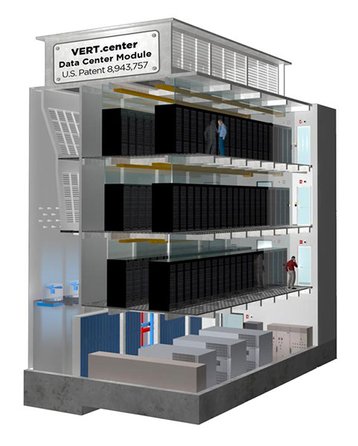 The growth of edge data centers puts facilities into built-up areas where space is at a premium, and modular builds fit with the speed required. A multi-story module fits more kit into the footprint, and it also has efficiency benefits because of the increased air flow by convection, Savard told us.

The Vert plan has a footprint of 1200 square feet, with all the electrical and mechanical systems on the ground floor. Above that, the design allows for up to three IT floors, with up to 120 racks and 1.2MW of load.

All this is put together from pre-fabricated modules, which ship on standard trucks. Or at least that’s Savard’s hope: so far the Vert modules don’t have named users.

Cooling flows through multiple floors is not new, says Savard, reminding us of the Marilyn data center in Paris - named after the vertical air flows which lifted Marilyn Monroe’s skirt in The Seven Year Itch - has a five story brick building using the principle.

Vert is working with three customers in Montreal, said Savard.One of them has a building project that stalled because of an underground highway at the site: “They wanted a multi-MW data center, but needed colocation space more quickly.” 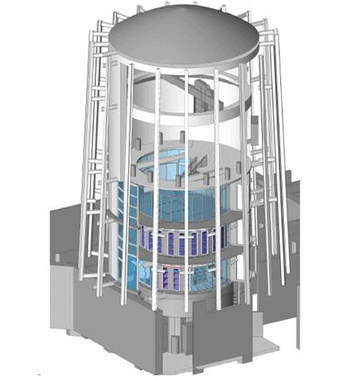 The Vert team, led by CTO Marc Parizeau, first got together in 2007 to build Clumeq, a cylindrical 1MW supercomputer in the concrete shell of a disused particle accelerator in Laval University, Quebec.

The team put cooling equipment underground and built in floors withint he 40 foot silo: “It was transformed into a giant CRAC unit,” said Savard.

The core of Clumeq is hot, while the surroundings are cold, and Savard says it could get to 30kW per rack without the need of rear door heat exchangers.

The air it puts out is hot enough to be used to warm the campus water system.

The Vert module is a bid to pre-fabricate Clumeq-style data centers. Building the UPS inside means it too can be cooled, and this allows the unit to be deployed outside or in a (very tall) space.

“We Include a free air cooling system, so you don’t have to add equipment to use outside fresh air,” said Savard.

One possible customer is Montreal’s district heat system, operated by Dalkia.  In the downtown part of the city, the district system has a narrow strip of land which would only hold an 800kW facility, if it went with a traditional data center, said Savard.

With power and cooling on tap, Savard reckons Vert could fit a 5MW modular build into the space, by adding together four modules.

Our small builds are as efficient as Google or Facebook

Quebec has free-air cooling ten months of the year, and this would produce a partial PUE (power usage effectiveness) of about 1.11, said Savard. Including the generators, this goes up to 1.17 or so.

This makes Vert’s small builds as efficient as the giant sites of Facebook and Google, he told us.

Savard thinks that prefabricated sites will become more commoditized, and hopes to license the design to be built by others. It uses only standard parts including the industrial coils and fans.

Modular data centers will take off now they are not constrained to shipping containers, which are “restrictive” said Savard.

The company is privately owned with some angel investors, funding research and development, he said. He now hopes for US partners: “We need pretty big funding to go to market.” 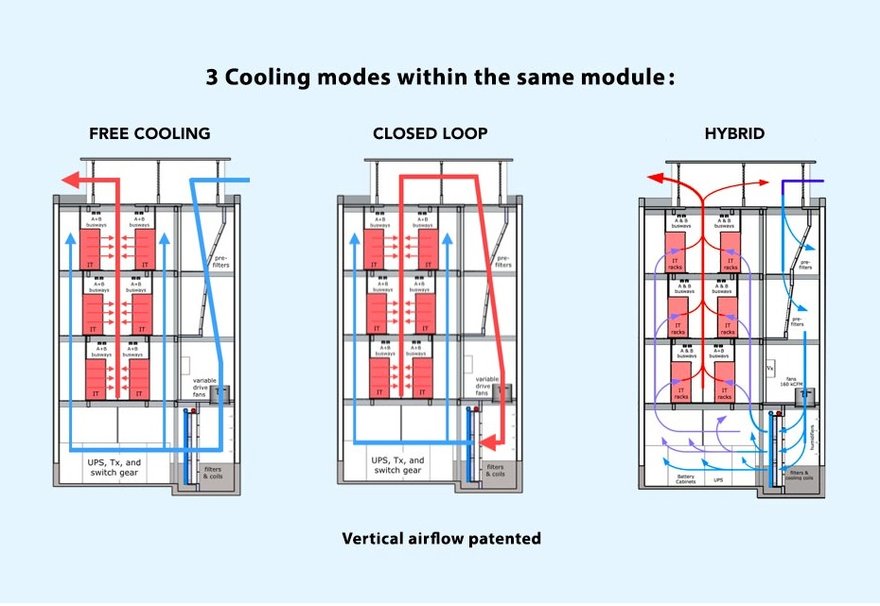 The group has another project in two or three floors of a skyscraper in downtown New York, where they hope to build within an actual building - not using prefabricated sections.