If Elon Musk has a “bucket list,” it probably includes getting to Mars and eliminating our dependency on fossil fuels. Truth be told, there are more than a few skeptical of his achieving either one.

As for overcoming the technical challenges of getting to Mars, one acknowledged space expert and self-professed skeptic Dr. Phil Plait has changed his mind about Musk and his company SpaceX, saying on his Bad Astronomy blog: “With his immense factory sitting directly behind me, there was no doubting this was not the wild dream of a sci-fi fan. This is reality. The dichotomy between public perception and what is really happening here was never clearer to me.”

What about kicking the fossil-fuel habit?

Currently, it is prohibitively expensive to get off the grid. However, companies are getting close: building hybrid systems using one or more of the following power sources: solar, wind, fuel cells, or battery power with grid power as a backup. Since Musk and Tesla employees know about batteries, that is where they focused their effort. 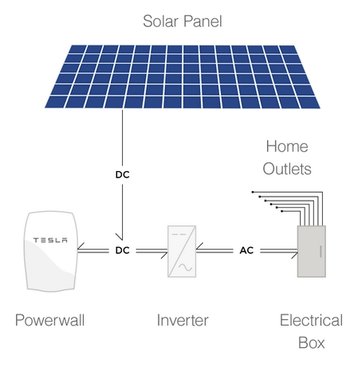 Tesla is offering the Powerwall at a domestic level: “The battery system consists of Tesla’s lithium-ion battery pack, liquid thermal control system, and software that receives dispatch commands from a solar inverter,” explains the Tesla website. “The unit mounts seamlessly on a wall and is integrated with the local grid to harness excess power and give customers the flexibility to draw energy from their own reserve.”

Scale from kWh to GWh

Larger organizations such as data centers will be more interested in the larger-capacity Tesla Powerpack, a 100 kWh battery storage system, which according to Musk is infinitely scalable. One way to think about the Powerpack is that each of the Powerpack racks in the illustration below is the equivalent of 10 Powerwalls.

Initially, experts feel that companies will use Powerpack technology to reduce the cost of power. Bloomberg Business lists the folowing benefits that companies might get from Powerpack:

If the ROI is there, this should interest companies owning power-gluttonous data-centers. 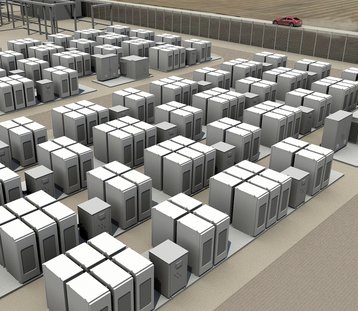 Arthur Cole, networking expert and technology writer, has voiced concerns at IT Business Edge. Cole acknowledges that Powerwall and Powerpack are effective backup solutions, plus a means to cover when renewable-power sources are not available. Yet Cole warns, “I don’t mean to be a Debbie Downer, but it is important to look at the totality of any energy solution before deciding on its true efficacy — not to block its introduction but to make sure we are aware of what the long-term implications are should the development in question scale up to global industrial levels.”

Cole’s concern centers on the fact batteries are not what he calls environmentally pure. “The manufacturing process is highly complex, requiring a lot of energy, and a fair number of rare elements that can only be obtained through invasive mining and manufacturing processes,” he writes. “As well, there is the disposal issue to consider.”

Cole also mentions that, Li-ion batteries can produce a runaway chain reaction that leads to an explosion as shown in this University College London video. These incidents are extremely rare, but Cole urges caution as there is little available data on Li-ion batteries storage systems of this magnitude.

Another voiced concern has to do with Musk’s mention that solar arrays could fit on the roofs of larger buildings. That is true, but in most cases the ideal location for a data center is not the best spot for renewable-power production. Living in Minnesota, I can attest to that. My solar array is much less efficient than one of the same capacity in Florida.

James Hamilton, distinguished engineer at Amazon Web Services (AWS) and someone I pay attention to, explained the pilot: “We’ve been working closely with Tesla for the past year to drive innovative applications of high-capacity battery technology in data-center applications with the ultimate goal of reducing the technical barriers limiting widespread adoption of renewables in the grid. Batteries are important for both data-center reliability and as enablers for the efficient application of renewable power. They help bridge the gap between intermittent production, from sources like wind, and the data center’s constant power demands.”

“The Tesla battery is a novel development that will do wonders for data center power and efficiency,” says Mr Cole, but he warns: ”It should not be looked on as the answer to our energy problems. A diversity of solutions will likely be the most effective means of powering the data center going forward. Not all of them will be the most efficient or the most reliable, but over any given time period, the enterprise should be able to tap the key advantages of each solution while downplaying the drawbacks.”

As for Mr. Musk and all his ventures, I would not bet against him. He has taken some hard licks and is now wiser for it. As an example, he offered an interesting, apparently tongue-in-cheek comment at the Tesla Energy press event, when pressed on the amount of land needed to power the entire United States using solar energy. Some people have suggested using satellites, said Musk: “Like maybe you need these satellites in space and space solar power. If anyone would be in favor of space solar power it should be me.”

How’s that for a hedge?