Talking to Alpha Centauri - still a long way off 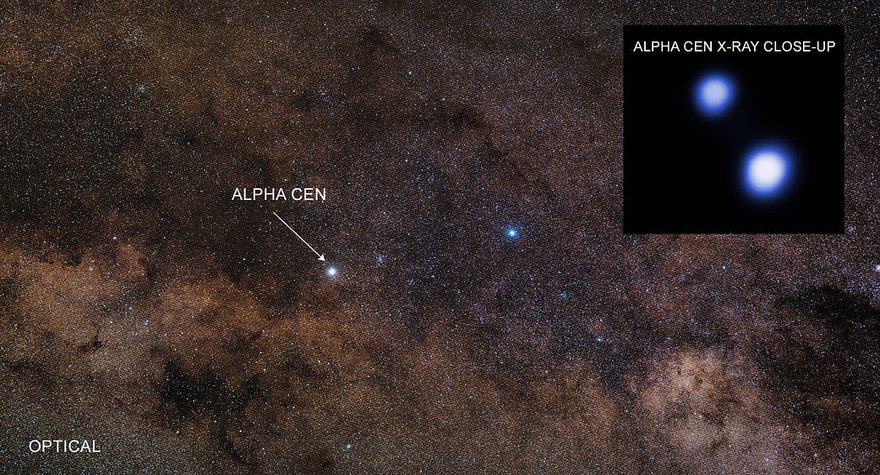 Once we digitize our solar system, our next impulse will be to spread further, interconnecting the stars.

But then the challenges of distance really start to become apparent.

"Now let's roll up our sleeves and say, where’s that star? It's Alpha Centauri - it's actually a group of stars - and the closest of the group is 4.2 light years, which is pretty darn far," said Dr. Don M. Boroson, Laboratory Fellow in the communication systems division of MIT Lincoln Laboratory.

In a thought experiment for the InterPlanetary Networking Special Interest Group (IPNSIG), Boroson did some calculations on what would be required to communicate with the stars.

“Let's try to do one kilobit per second," he said, mapping out the requirements, and noting that any lower data rates would produce so few photons it would be hard to spot from background radiation.

“The most efficient way to send data turns out to be sending what we call orthogonal signals, and it can be a pulse,” he said, with the process allowing for a much as four bits to be sent per single photon.

Boroson trialed a similar system when he built the world’s first successful space-based, high-rate lasercom system for NASA's GeoLITE program, as well as the Mars Laser Communications Demonstration, which ultimately did not fly due to the cancellation of another satellite it was meant to share a ride with. Following that, he built the world’s longest lasercom system between the Moon and Earth.

“On lunar laser comm we did post positioning modulation,” he said in a briefing to IPNSIG attended by DCD. “We made engineering trade-offs, so we were able to get two bits for every received photon.”

To send this 73db signal from Alpha Centauri would likely require a three and a half meter telescope. “The Hubble is 2.4 meters, so this is bigger.”

The transmission would require at least a kilowatt. “Lasers today are not 100 percent wall plug efficient, so that means that we need to make several kilowatts of power in order to make this laser work,” he said.

The Earth-based ground receiver would need to be around 40 meters - something the European Space Agency already plans to develop for other research projects - or something could be built in space or on the Moon.

So, now that you have your system at Alpha Centauri and your ground receiver, how do you actually get them to talk? Current long-distance communication between two systems usually involves some level of feedback and error correction, with one system able to tell the other if its communications are off-target.

“Lasers today are not 100 percent wall plug efficient, so that means that we need to make several kilowatts of power in order to make this laser work”

The problem is that this is a significantly longer distance. “There's no feedback,” Boroson said. “The Earth station can't tell the satellite it missed because it's an eight-year round trip. This is all open loop, I have to hit my spot with my narrow little beam.”

During this time, the Earth is in constant motion, traveling about 2.6 million kilometers a day (relative to the Sun). Using the same wavelength as Boroson used in his Lunar mission, 1.5 microns, the data beam will be 17 million kilometers across by the time it reaches Earth.

“So this is kind of the size of our spot,” he said. “The Earth would move through that spot in about seven days. So I better point my beam to be plus or minus three and a half days, or three and a half degrees, in something that took 4.2 years to get there. Otherwise, I'm going to miss.”

There’s also the motion of Alpha Centauri, and the ‘proper motion’ of the two systems in relation to each other to take into account. “So I need to know all these motions in all these positions.”

That motion will also make getting the satellite to Alpha Centauri challenging.

Alpha Centauri A and B orbit each other with a period of 79.91 years. "So the angle between them changes to the tune of a few 10s of microradians, but it's changing all the time," Boroson said.

When we send probes to Mars, the rockets periodically recheck their trajectory along the route and adjust accordingly. Over the significantly longer distance to one of the Alpha Centauri stars, the chance of needing to course correct is much higher - but the ability to do it is much more constrained.

Between our star and the end goal, power will be hard to come by. The system will be the furthest man has ever gone from an energy source, and solar panels will be useless until it nears Alpha Centauri. The launch will likely have to be perfectly accurate, with no ability to realign midway during its journey.

Now how long would that journey take? Let's look at the fastest thing humans have ever made, the Parker Solar Probe. "It gets really close to the Sun and takes pictures of it," Boroson said. "But it's hot there, so it zips around it to cool down." At peak, it hits a whopping 692,000 kilometers per hour.

Maintaining that speed, it would still take 10,000 years to get to Alpha Centauri. "I wouldn't want to wait that long," Boroson said.

As part of the thought experiment, he said to presume we managed to build a system that could get there in 100 years, traveling at just under 50 million kilometers per hour.

We don't know if we can build electronics to last that long, we don't even know if there will be advanced humans still on the planet to receive any messages, but let's assume we can make it.

Even then, the speed becomes a problem - if it doesn't slow down, it would blast through the star's solar system in less than a week, giving a preciously short window to get the data back.

Should we pull all that off, we better make that count.