Whether you’re feeling the crunch of bandwidth issues or starting to outgrow your space, it’s time to consider whether software-defined networking (SDN) makes sense in your organization’s data center.

SDN may be software at its heart, but it’s a big move and will cause changes to the physical infrastructure of the data center. It’s an opportunity to future-proof the facility or address nagging issues with bandwidth or efficiency. Or you may be able to combine an Ethernet speed upgrade with SDN to improve operational efficiency.

“Traditional data center network architecture is built around predetermined paths with alternative back-up links that mimic a tree structure,” said Andre Kindness, principal analyst at Forrester Research. “With traffic required to ascend/descend a tree structure to get to another section of the infrastructure, the links have to be increasingly larger as packets get closer to the core. In general, the overall network system becomes less efficient as the data center network gets larger.” 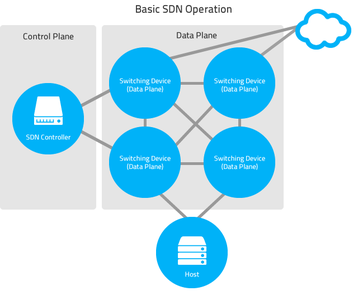 With growth comes the problems of growth

Growing pains are something that most data center administrators will certainly commiserate with, but as the network expands, they will find that efficiency decreases exponentially.

“SDN provides the ability to optimize the paths and links since the system is choosing the best path per packet, taking multiple variables into account,” Kindness said: “The network becomes a mesh of connections. The size and quantity of uplinks becomes less critical on switches too,” and both switch and network architecture changes.

“Weird appliance warts dangling off the network and wonky workarounds go away too. This is especially true if the network leverages services such as virtual firewalls,” said Kindness.

It comes down to the very fabric of the technology, but it could be enough to actually save money on infrastructure in the long run. “In an SDN, much of the intelligence is moved to a controller that is separate from the individual devices,” said Andrew Lerner, research director of networking at Gartner Research in Stamford, Connecticut.

“In doing so, you need less robust capabilities (ie, features) in the hardware. Not that hardware immediately becomes a commodity, but differentiation shifts towards software. So it makes sense that network hardware expenditure goes down,” said Lerner.

“This also changes the thought process around support and maintenance operations,” Lerner said. “Perhaps it makes more sense to self-spare than to pay maintenance on all equipment. Further, more and more changes are made in software at the controller layer and programmatically, so you’re doing less device-by-device configuration.”

SDN will cut the physical footprint, said Sky Sharma, a CIO at the United States Air Force: “By allowing agility and programmable configuration, the infrastructure will be leaner in its physical footprint. SDN helps to achieve better allocation of critical bandwidth and decreases complexity of topologies by design.”

And it’s symptomatic of other changes: “As companies move from 1GbE to the server to 10GbE and beyond, they are replacing hardware anyway, so that also gets them newer network operating system software supporting both APIs and SDN protocols like VxLAN and OpenFlow,” said Mike Fratto, principal analyst of enterprise network systems at Current Analysis.

Even though SDN might seem to absolve you from hardware worries, it’s well worth tracking the Ethernet specifications on which your network will operate.

When we think about future-proofing the data center, we need to consider that 10GbE will eventually go the way of the dinosaur. While 40GbE and 100GbE are already open standards today, there are proposals for 25GbE and 50GbE standards that may complicate the switching picture for your future data center upgrades (see box, opposite).

The new specifications are still under development and won’t push the performance of data center networks in the immediate future, but they will offer choice when the standards are eventually signed off and implemented in products.

If you have enough network bandwidth and you’re willing to accept a VMware-centric solution, VMWare’s NSX can be simply installed and there’s no impact, but there are a number of issues involving bare metal servers and the need for gateways on the network.

If virtual network separation is difficult in your site, you may need to physically upgrade the network to either OpenFlow or Cisco ACI, which should bring other benefits, including cutting cable clutter. A big benefit is predictability: “Networking is changing in data centers from N tier architectures (where performance was a bit less predictable) to two tier leaf/spine or one tier, in some cases (where performance is more predictable). Predictable architectures are simpler to use because the SDN doesn’t have to think about performance differentials,” Fratto said.

Of course, smart money builds a network at its core that can take care of your business needs now, and probably for six years, because you don’t want to change your core network out. Consider how much bandwidth you’re using and how much you think you will use, and then buy an SDN platform that’s expandable beyond that with simple upgrades.

But maybe we’re getting ahead of ourselves. Despite the promises, not everyone is looking forward to the SDN revolution – and real-life adoption has been slow to date.

“I’m bullish on the opportunities and potential that SDN promises, but there are still only small pockets of adoption today that are quite limited in scope, or that address a specific need,” said Mike Spanbauer, vice president of research at NSS Labs, a security analytics firm in Austin, Texas. “Traction remains sluggish for any general use cases.” While overall SDN could save cash in the long run, some data center professionals see the technology as yet another threat to their livelihood – a virtual offshoring of their responsibilities. “SDN fundamentally changes the way other infrastructure and operations professionals can leverage the network,” said Kindness. “SDN can empower other teams.

While SDN can lift a lot of manual and repetitious burdens off networking professionals, it also scares the daylights out of them because it ‘appears’ they aren’t needed, when it’s in fact the opposite.”

“Networking professionals will be needed more than ever,” said Kindness.

Will SDN mess with your cables?

Vendors like to say it’s all plug-and-play, but the chances are you’ll be ripping some cables in the process of implementing SDN. Whether for efficiency, bandwidth increase or basic incompatibilities, don’t think you can get away with an SDN upgrade without pulling apart some racks.

According to Mike Fratto of Current Analysis, this might push a move to fiber, with attendant difficulties: “New cabling is needed when going from 1GbE to 10GbE and beyond. When you adopt or replace fiber for 10GbE and beyond, companies can’t field terminate it any more. It all has to be done in a clean room. That explains the industry’s efforts to prolong the useful life of copper (see page 41).

Cisco has a new technology called BiDi that runs 40GB over 10GB fibre cable, which can avoid a big and costly change to structured cabling – for a little while at least. However, BiDi is proprietary right now, so unless it meets your needs, most CIOs would be best advised to look for a more standards-based solution.