Pushed against the wall by growing environmental concerns, a tropical climate, and surging digital demand that sees data centers gobble up seven percent of the country’s grid power, Singapore has laid down the gauntlet. It has enforced a moratorium on new data centers and accelerated research and investments into energy-efficient data centers and renewable energy sources. 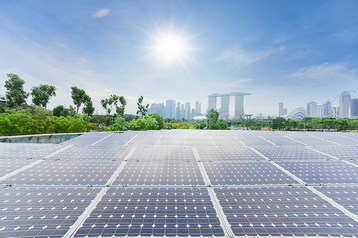 But while the plans are decidedly self-serving, the technology innovations and roadmaps wrought could well blaze a path for more sustainable data centers not only in tropical climates but also around the globe.

The traditional approach to tackling the challenge of cooling hot data centers sustainably is to build them in places where the temperature is cold, or locations with easy access to renewable energy. But Singapore has a year-round climate that is both hot and humid - and renewable energy options are also decidedly lacking.

The Singapore National Climate Change Secretariat (NCCS) set out the problem on its website, noting how practically every source of alternative energy is not currently viable, from a lack of fast-flowing water (hydroelectric), low average wind speed (wind), and narrow tidal range (tidal power). The only viable option is solar power, though even that is hampered by high cloud cover and limited land for large-scale deployments of solar panels.

The focus on solar led to a decision in 2019 to increase the country’s solar capacity to 2-gigawatt peak (GWp) by 2030. But Singapore is one of the most densely populated cities in the world, of which 56 percent is covered by vegetation. There is limited space to build the vast solar farms needed for a country of almost 6 million.

Part of the solution is almost banal: blanket rooftops across the island with solar panels. Beyond that, more solar panels are needed, however. Vegetation acts as a carbon sink and must be maintained, so this means building large-scale floating solar farms on large pools of water such as reservoirs and the surrounding sea. On this front, one of the largest offshore floating photovoltaic (PV) farms and one of the largest inland floating PV farms went live this year, with two more expected to be completed later this year.

But even that ambitious sounding 2GWp target will only amount to four percent of the country’s total electricity demand based on current consumption figures. This is nowhere near the seven percent currently consumed by data centers. This is where the next leg of the solar plan comes into play: Establish a network of regional energy grids and tap them for renewable energy.

One of the key components fell into place in July, when Sunseap Group signed an MoU with Badan Pengusahaan Batam to build the largest floating PV farm in the world, on a large reservoir in Indonesia’s Batam Island, just 50km from Singapore. According to Sunseap, a portion of the green energy will be consumed within Batam while the balance can potentially be exported to Singapore via subsea power cables.

This development effectively exports the floating PV farm expertise which Sunseap gained in Singapore: it played an instrumental role in a floating solar system testbed at Tengeh Reservoir and it built the sea-based floating system in the Straits of Johor. It’s a win-win solution to combat global warming.

Putting the proof in the pudding

Another key prong lies in enhancing the energy efficiency of data centers. In June 2021, that the Singapore government and Facebook announced a $17 million (S$23m) project to test novel cooling techniques. The Sustainable Tropical Data Centre Testbed (STDCT) is expected to start operation by October this year.

Little has been published about the TDC, but from conversations with those in the know, we understand it was considered a small proof-of-concep. Sources confirmed it was completed in 2019.

DCD understands that STDCT is envisioned as a continuation of the TDC work, to validate the optimal operating temperature and humidity setpoints in a tropical data center for reduced energy consumption while ensuring the continued reliability of IT equipment.

The search for better energy efficiency is not a purposeless objective. As studies have shown elsewhere in the world, increased efficiency has to some extent offset a massive growth in data center capacity, without energy usage skyrocketing.

This is far lower than the increase in capacity during a period of white-hot growth through better energy efficiency, in which capacity increased far faster than power. Taking figures from two different researchers, in 2014, Structure Research reckoned Singapore had 200MW of capacity; in 2019, CBRE found 359MW of capacity in the island. That gives approximately an 80 percent increase in capacity.

In Northern climates, data centers are run at close to room temperature. Validating the feasibility of doing this in a tropical climate might be the sort of breakthrough that Singapore needs. Assuming increases in energy consumption by data centers can be kept low or flat for a season by increasing efficiency, it means the data center hub can dive back into the digital infrastructure race without facing onerous carbon penalties.

Singapore’s focus on sustainability and energy-efficient data centers has the potential to move the needle for the industry. In a twist of irony, the largest and most metropolitan cities that require the most digital services are also those that face the tightest supply of land. Given the majority of the world’s population lives close to the coast, a viable blueprint to leverage floating solar panels built on existing reservoirs can benefit these cities.

Moreover, insights about running data centers hotter without degradation in reliability or equipment lifespan will benefit everyone. Other related avenues of research are ongoing as part of the STDCT, including closed-loop water cooling to the rack, which is more energy-efficient and eliminates the water wastage inherent in traditional cooling towers.

As data center supply dwindles because the moratorium blocks new facilities, this begs the question of whether it would make sense to redevelop existing facilities to support higher energy efficiency? While it sounds ludicrous at first blush, perhaps financial incentives and technical support can serve to incentivize – and normalize – the redevelopment of older generations of data centers into more energy-efficient facilities. And it can be done by upgrading the data center in sections.

Singapore has seen a possible model for upgrading old facilities, too. According to Singapore Business Review (SBR) Princeton Digital Group (PDG) last year successfully converted the former IO Singapore data center that it acquired into a hybrid management environment made up of both modular space (Inherited from IO) and whitespace-raised floor setups. It was done without service downtime for existing clients - and SBR gave it an award.

As extreme weather patterns inundate Europe, East China, the US West, and elsewhere, every bit helps. While we can no longer do without digital services, the race to digital does not have to come at the expense of the environment.