There is no question that Singapore is among the top data center destinations, attracting the largest global operators, as well as cloud players such as Amazon Web Services, Microsoft, Google, and IBM SoftLayer, as well as the likes of GoDaddy and Digital Ocean.

Against this backdrop of international giants, our interest was piqued when Kingsland Development, a 40-year old regional real-estate developer told us it would officially open its very first data center for business earlier this month. How does this intrepid new venture hope to stand against the many incumbents in the Singapore data center market?

Two weeks before the grand opening, we took a trip down to Kingsland Data Center to take a tour and find out about the company’s direction and strategy. 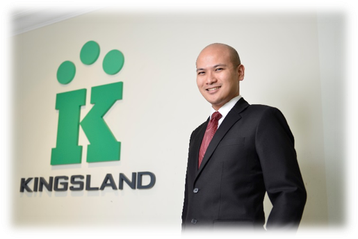 New kid on the block

Asher Ling, COO of Kingsland Development took us round personally. Unlike your typical COO of a multi-million-dollar facility, he is an engineer by training, and could rattle off statistics such as the critical IT load per floor, the name and purpose of the various mechanical and electrical components he showed us, and even the type of Ethernet cabling snaking up a communications riser.

Of course, Ling doesn’t know everything. We spotted video cameras from Axis Communications, a well-established and acknowledged expert in high-quality IP TV systems, and he had to check with his security manager how many are installed in the site – currently 180, with more due to arrive as the data halls fill up.

Ling was also keen to show us security features. There are mantraps to defend against attempts at tailgating, and a key management system that looks after the keys to essential and mission critical rooms in the building. The system logs the identity of the person taking a key, as well as the duration that it was in use – data which is crucial for security audits and incident response.

“We spend on the best,” Ling told us when we commented on some of the top-of-the-line hardware we spotted, including the two four-ton cargo lifts serving the unloading bay at the back.

Yet the firm is also pragmatic about things which are less mission critical. For example, the meeting room that Ling ushered us into was spartan, with a functional table and some chairs. The data center also doesn’t have a DRUPS (Diesel rotary uninterruptible power supply) installed, which is increasingly found in new data centers and championed for its environmental friendliness over banks of lead-acid batteries. 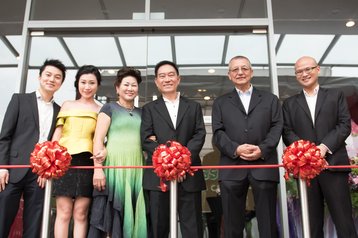 Starting from a clean slate

According to Ling, Kingsland Data Center is a secured-by-design facility, with the team incorporating the Threat Vulnerability Risk Assessment (TVRA) guidelines of the Monetary Authority of Singapore(MAS) into the blueprints of Kingsland Data Center from the get-go. This is noteworthy as the recommendations contain stipulations against underground car parks and specifications about perimeter fencing – among others – that may not be easy or possible to completely meet in an existing facility.

Though not mandatory at this point, the MAS recommendations are quickly evolving into a de facto standard not just for financial instructions in Singapore, but also other bodies looking to protect their mission critical infrastructure against a range of physical and terrorist threats.

MAS TVRA compliance aside, a perfectly legitimate question would be how Kingsland could possibly be in tune with the market requirements and most sought-after capabilities in its first data center? After all, the company has no existing pool of customers, or readily accessible in-house experts to draw from.

“We try to spend a lot of time interacting with partners, end customers and data center vendors, to understand some of their requirements and we incorporate them into our design,” explained Ling. “We don’t pretend to know everything about [data centers]; we work very closely with our partners, data center operators and end-customers, really, to incorporate a wish list of what they wish to see.”

Some of this feedback can be seen in the physical design of its data center, with its generous raised floor height of 1m, and a higher than usual slab-to-slab height of 7.2m, presumably to allow Kingsland to meet all current or future requirements. Other enhancements are less obvious, such as having the security chief report directly to the COO instead of to the operations team, or physically wiring up the DCIM system for monitoring only, while separating the controls of individual systems to guard against external hackers.

Ling said the data center was deliberately tailored to appeal to a wide range of customers. “Clients are very unlikely to pre-commit in Singapore these days,” he said, noting that specifications have to be up to scratch. “They will come and see what you have. They have very strong engineering teams to do their own technical due diligence.”

Given the high capital expense involved in even a single data center, it would be reasonable to expect that its design and operating model will be tailored towards maximizing profits. In Kingsland’s case however, there is a strong sense that many of these decisions were made with customers in mind.

For example, the data center sports a unique multi-tier design that allows it to deliver either Tier 2, 3 or 3+ mechanical and electrical infrastructure in accordance to the requirements of a specific customer. This means that customers can decide on various levels of redundancy based on their specific needs, gaining capex and opex savings by not paying for capabilities that are not required – and which dovetails well with Kingsland’s mission to be a fully customizable turnkey data center offering.

Another design decision that stood out was the presence of a row of meeting rooms just adjacent to the data halls, instead of their traditional location on the ground floor. And these are not the usual claustrophobia-inducing box-rooms either, but are sufficiently spacious to be used as a network operations center (NOC) if needed. According to Ling, this addresses a key demand with some customers that want to locate their operations team close to the hardware. The trick, he says, is finding a right balance between the office and the IT white space. At this ste, Kingsland set the propotion at 15 percent of the gross floor space.

Finally, Ling is keen for Kingsland Data Center to serve as a hub for connectivity between both telcos and communications providers. To encourage this, he has decreed an open cross connect arrangement in which no multi-recurring cost fees are charged. And to show his seriousness towards the development of what he calls a “natural” ecosystem, Ling also says he will not deal with network connectivity at all.

“No data center can be an island by itself, either within a country or a region. There is a very critical need for data centers to be interconnected together,” explained Ling. “There are actually a lot of strategic partners [including] carriers and consortiums that will be operating from our premises. In due time I will share who they are.”

So how is Kingsland Data Center different from the other data centers out there? “We provide the land, the building, the core infrastructure, the security. We want to support the growth of data center operators and data center demand out here,” said Ling in response. “That’s the vision we want to be.”