Consumer devices have all the memory they need, but AI applications in data centers still want more

Kingston Technology has been a part of the memory landscape for more than 30 years. It makes everything from SD cards for consumer devices to server SSDs (solid state drives), and more recently has started selling literally flashy gear for gamers. Its first ever product, and its core competency, is DRAM - it is the world’s largest privately held producer of volatile memory.

Kingston was co-founded in 1987 by its current president John Tu, and COO David Sun, in response to a chip shortage. Today, it has manufacturing and logistics operations in the US, the UK, Ireland, Taiwan and China.

A team from Kingston recently visited DCD to chat about RAM - here’s a public service announcement on why you shouldn’t overlook this humble server component. 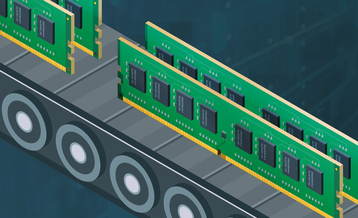 “People think that RAM will just install itself,” said Adrien Viaud, senior technology manager at Kingston. “Yes, it’s probably a small aspect of your infrastructure, but it’s a major cost on the server side.

“You would be surprised how uninformed some of our customers sometimes are, saying 'we put in whatever.' Then they pay extra for that faster memory which clocks down due to a particular processor.

“It’s all about education: for example, DDR4 LRDIMM has extra data buffers on the PCB, that will generate better performance, of course, but more heat and more power. It’s kind of funny, because when we go to the Middle East, we ask if they are worried about power consumption and they don’t care. They have money to pay for cooling, even if it’s in the desert. Now, when we go to the UK, they say they have to be careful because the National Grid is really constrained. You have to bear all of this in mind.”

“We want to be a trusted adviser to our partners,” chimed in Miriam Brown, B2B strategic marketing manager for EMEA. “If they want to talk about scalability, power, capacity, performance - the guys will advise based purely on business needs. They understand applications that are working in the data center.”

According to Viaud, estimating RAM power consumption is a tricky business: it depends on the load, type of module, chip capacity and density, and proprietary lithography - a piece of silicon made by SK Hynix can be very different than one made by Micron.

One of the main benefits of having lots of RAM is it helps consolidate expansive server farms into more manageable proportions. More powerful - and thus often more efficient - servers will increase rack density, which can help save money on expensive square feet in colocation facilities.

“By upgrading your memory, you could potentially consolidate your four current servers into one. You save on rack space, you save on cooling, you save on everything. The question is - do we upgrade or do we go for the next generation of server?” Viaud said.

In the past, a lot of the growth in the memory market was driven by the consumer sector - since operating systems were massively hungry for RAM but capacities weren’t high, and upgrades were frequent. But their memory demands seem to have stabilized around 8GB - so now memory vendors are all about data centers.

“That’s where capacity growth is going,” said Pasi Siukonen, Technical Resources Group team leader at Kingston. “Typical desktop or laptop users, when they are following their OS recommendations, we have seen from Windows 7 to 8 to 10, that there’s not a lot of memory requirement on the OS side, it’s the same on MacOS and Linux.

“So we see a lot more of the memory investment on the server side.”

By the way, those fancy AI applications that everybody is talking about? They love to munch on memory. Sanjay Mehrota, CEO of massive memory-maker Micron, recently told analysts that AI servers need six times more DRAM than servers for traditional workloads.

“On the RAM side, we can see 128GB space per module, and soon it will be 268GB per module. Imagine the capacities we can reach,” Viaud said. “DDR5 starts at 3.2GHz; latencies are going to go up as frequency goes up, voltage goes down to 1.1V - DDR4 was 1.35V overclock or 1.2V standard voltage.”

The interesting fact about Kingston is that - even though the company made $6.7bn in 2017, the last year for which there’s available data - it does not manufacture its own memory chips.

Instead, it focuses on customization and assembly across eight manufacturing plants with 60 surface mount technology (SMT) lines, rumored to be churning out more than twenty-five million memory modules every month.

In a world where silicon has become a commodity, being fabless makes sense: Nvidia, Qualcomm, Xilinx and AMD, which all went fabless, can all attest to that, having moved to fabless operations years ago.

“You have to remember, if you look at the DRAM landscape in the nineties, there were like 20 DRAM vendors. There was Toshiba, Qimonda, Elpida. There’s four left now - because it’s such a dangerous market to go in. And this is why they probably made a wise decision to not get involved in manufacturing of wafers,” Viaud said.