Every year as part of the DCD Awards, we celebrate the individual achievements of exceptional data center managers, people who go above and beyond the call of duty, who sacrifice their time, effort and emotional well-being on the altar of uptime.

At the end of 2018, we presented the Data Center Manager of the Year award to Sunday Opadijo, the man in charge of critical infrastructure at Rack Centre in Lagos, Nigeria. Despite the harsh tropical savanna climate and the notoriously unreliable power grid, Opadijo has presided over six years of uninterrupted data center operation. Sometimes, this meant shedding non-essential loads – like the power to the company’s own office.

Opadijo started working for Rack Centre in 2013: “When I joined the company, we were starting from scratch,” he told DCD. “It’s a global player now, when it comes to data centers. We have lots of foreign clients.

“There are a lot of smaller data centers in the region that really were not knowledgeable about Uptime Institute, or other standards like ISO 27001, or were not inclined to invest as required. Their customers just wanted to keep IT infrastructure somewhere, and not demanding 100 percent uptime.”

Rack Centre customers do, however - the company opened its first facility in 2013, as the only data center to offer Tier III redundancy in Western Africa at the time.

Before Rack Centre, Opadijo spent nearly a decade working for South African telecommunications provider MTN. “I started doing research on data centers, since it was something I was involved in at the time. I began reading a lot, and applied for a training course, but that didn’t come through, so I decided to train myself - the first data center training that I received was actually online, through APC’s Data Center University [today known as Schneider Electric’s Energy University].”

He continued to hone his skill by attending training sessions around the world, including courses in the US and the UK, with organizations like CNet, RF Code and Optimum Path. This opened new doors: “I learned about design, so I was able to do design work for MTN on new facilities.”

Opadijo also noted that the domestic market had made great strides in recent years, and today, it was perfectly possible to study data center engineering without leaving Nigeria. 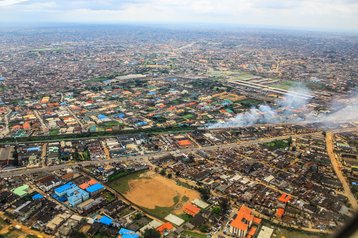 His ideas about the importance of self-reliance seem to stem from the fact that the Rack Centre facility is based on modular data center designs made by British modular infrastructure specialist BladeRoom.

“You can imagine - BladeRoom is several thousand miles away, they don’t have a presence in Nigeria. If you have any major issues, and you don’t have the knowledge to troubleshoot and fix those, you will experience downtime,” he explained.

“When I joined, we developed policy documents, processes and procedures for every activity that my team carries out. There’s a checklist for everything.”

“One thing that we have learned is that we do not panic. If there’s an emergency, I’m in command, and I tell them what to do, and in which order. We have walkie-talkies and we treat it like a military operation.”

“We kept running on a single generator – we had to do load shedding, we had to prioritize - we cut off the office completely, since at this point, the office is not critical.”

The data center remained online, and the team has learned from the experience - today, Rack Centre employs a sophisticated diesel delivery value chain management process and has infrastructure in place to avoid bad diesel issues. But in situations like these, the most important thing is preparation: “When you are running a data center, you have to prepare for a potential disaster - then you’re going to be OK.”