Optical disc as the future of data archiving

This week, Sony has launched a storage appliance that eschews traditional magnetic media like hard drives and tapes in favor of lasers and plastics. The Everspan Library System is best described as a modular jukebox that holds thousands of high capacity Archival Discs (ADs) and is operated by an autonomous robotic arm, capable of handling up to four dual-layer discs at a time.

The unusual appliance is the brainchild of Frank Frankovsky, former chair of the Open Compute Project Foundation (OCP), who told DatacenterDynamics that Everspan can cut the costs of storing information over long periods of time thanks to both energy savings and the innate durability of Archival Discs.

“If your retention period for data is longer than the life of the media, you have to repurchase media after a certain period of time. And with our media, what we are saying is you don’t ever have to replace it for the first 100 years. And if there’s a fault in the first 100 years, we’ll replace it at our cost. That’s a huge part of the TCO equation, because media makes up to 80 percent of any sort of storage solution, especially in archiving.” 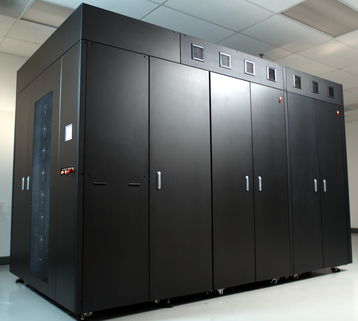 One hundred years of solitude

Frankovsky developed the ideas behind Everspan while serving as the vice president of Hardware Design and Supply Chain Operations at Facebook. The social network still uses a similar system to store rarely accessed images and videos, but currently has no plans to offer it as a commercial product under the auspices of the OCP.

In March 2014, Frankovsky left the company to establish his own business called Optical Archive, which aimed to commercialize the technology and was promptly acquired by Sony.

Everspan is the first product from Optical Archive to hit the market. It consists of three types of units: the Base Unit, the Robotic Unit, and up to 14 Expansion Units, based on the ‘triplet’ rack developed by the OCP and containing up to 43,520 Archival Disks each.

Additional Expansion Units can be deployed when needed, with a marginal increase in in space, power and cooling requirements. The total capacity of a single Everspan system can reach 181 Petabytes and up to four systems can be linked to offer 724 Petabytes of total addressable object storage. 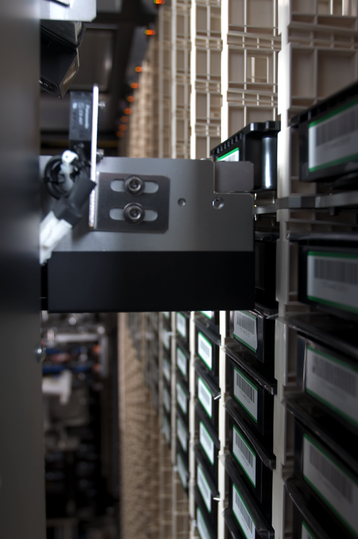 The Archival Disk standard was launched by Sony in 2014 as a tougher, higher capacity version of Blu-Ray. It features a completely inorganic recording layer, better scratch resistance and tighter track pitch, allowing to squeeze more data on the same surface area.

The appliance currently uses 300GB ADs, but future versions could store up to a Terabyte on a single piece of plastic, increasing the upper limit of an Everspan deployment to several Exabytes.

There are plenty of reasons to use Archival Discs instead of hard drives or tapes. They require no power when data is not being accessed, unlike hard drives, which consume electricity even when they are idle.

Optical technology also enjoys complete backwards compatibility: the latest Blu-Ray player on the market is perfectly capable of playing the original CDs made in the eighties, so when higher capacity discs are available, they can be introduced into the older Everspan systems without disruption.

But the main benefit of Everspan is longevity – tapes and drives need to be replaced every five to seven years, and require continuous investment. In contrast ADs can reliably keep data for a century, as long as data center temperatures are maintained below 86F (30C). At 122F (50C), the lifetime of the disc is reduced to ‘just’ 50 years.

Frankovsky told us the dimensions of the system have been designed to fit into a traditional data center floor, taking up the same amount of space as two rows of servers, with the robot moving through the ‘hot isle’ in the middle.

“This is one of the advantages that a lot of customers like – because a lot of tape silos have a very odd footprint, and need to be put into their own little section of the data center.”

“I’ve never met a single customer who would say they liked administering tape,” he added.

Everspan is no slouch either – the robotic read-write array features not one, but eight lasers for a total read speed of up to 18 Gigabytes per second, far outmatching tape libraries and even archival platforms based on hard drives.

Storage to survive the apocalypse

And finally, any data written on Archival Disc would likely survive an event that would cause humanity itself to go extinct. Sony once submerged one of its Blu-Rays in sea water for five weeks, and was subsequently able to read all of the data stored on it. Optical discs are also the only digital media that can withstand an Electromagnetic Pulse (EMP) attack. There’s just one thing that can damage them, and that’s dust, so Everspan includes an air filtration system as standard. 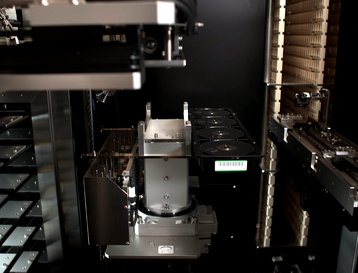 It’s easy to imagine that the Los Alamos National Laboratory (LANL) – one of only two US facilities tasked with development of nuclear weapons - chose to test Everspan for its EMP-resistant properties.

“LANL seeks to determine if optical storage will outperform both tape and hard drive technology in this usage model. LANL has been appreciative of the Sony team’s cooperation during our evaluation.”

The Everspan Library System is currently displayed at the Open Compute Summit in San Jose, and first production units are expected to ship in July 2016.

A previous version of the story incorrectly stated that Everspan operated with traditional Blu-Ray discs.