OpenStack Sydney: Drawing down the cloud

The cloud isn’t all public services like Azure and Amazon Web Services. Within enterprises, OpenStack has become the de facto cloud platform for open source private clouds. It also has a strong story on integration with the public cloud.

OpenStack followers (and those reading DCD’s coverage of the platform) should be aware of all this. But the latest OpenStack summit, in Sydney last week, exposed some revealing use cases from the Asia Pacific region. The conference also heard from a user that found OpenStack was actually a better platform than the public cloud for a particular application - and migrated off the public platform. 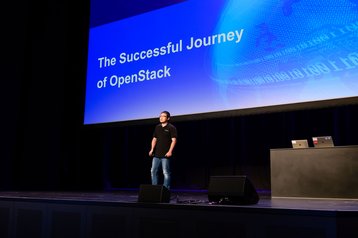 OpenStack leaders are clear about the role of public cloud. “In computer architecture, the need for scale trumped the need for speed. Cloud computing has clearly won, and companies are adapting to the new paradigm,” declared Lew Tucker, the vice president and CTO of cloud computing at Cisco in the summit keynote.

But while the public cloud providers would have you believe that the only viable option is an all-cloud deployment, Tucker noted that 94 percent of organizations today are using multiple clouds. And it should probably come as no surprise that OpenStack, the open source platform for cloud computing is heavily used in combination with a lot of these cloud components.

A Cloudify survey (pdf) of 700 IT professionals found that the most popular two-cloud combination is Amazon Web Services (AWS) and OpenStack, while 86 percent of cloud service providers in a Heavy Reading Survey cited OpenStack as being essential or important to their organization’s success.

“OpenStack today is the unified platform for multi-cloud management, including container management. Besides ‘free’ and ‘open’, we also like its abstraction of APIs and the plug-in system, which is very important for us,” said Yaguo Zhou, a senior cloud architect at China UnionPay about his organization’s use of OpenStack.

There are also real-world savings to be obtained from the private cloud platform, too. A team of 76 members at China’s Tencent developed the OpenStack-based TStack private cloud platform, and used it to provide services for internal IT and testing environments, and hybrid cloud services for government departments and enterprises in China. The team managed to cut server costs by 30 percent and operational costs by 55 percent, explained Bower Liu, the chief architect of TStack. 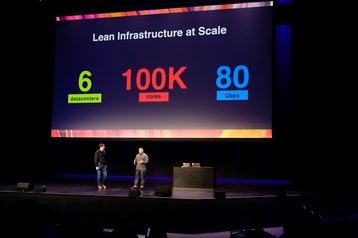 Elsewhere, some users are migrating large public cloud deployments back to private clouds run on OpenStack. Adobe, for instance, brought the Demand Side Platform (DSP)‎ component of its Advertising Cloud in house. A team of just four people deployed OpenStack to build a massive private cloud of 100,000 compute cores to run 90 percent of the Advertising Cloud’s real-time bidding processes – with plans to move to 100 percent soon.

“A DSP platform has a lot of storage, a very strong latency requirement. We wanted to get where we wanted to be [with a cloud that can be] managed with a small team. The cost was a driver,” said Nicolas Brousse, the director of operations engineering of Adobe’s Advertising Cloud business to DCD.

Brousse explained that the DSP platform was hosted on a popular public cloud platform since 2008. However, cost and performance considerations that remained unresolved compelled the team to seek out alternative solutions. He said: “The move was an executive decision based on TCO analysis. We worked with our public cloud provider for years; we challenged them [to resolve our concerns]. We were trying not to move in-house.”

After exploring options in earnest from 2013, the actual move back to its own data center took place in 2015 with a single data center. Once the design and cost savings were validated, things started moving quickly and the team built another three data centers in 2016 and two more this year. However, the team stressed that they are still happy to use the public cloud where it makes sense to.

“When we need a burst of capacity, we still use [the public cloud]. If I need to bring up a new zone and if we have some challenges with our data center, I know that [the public cloud] is available and I can leverage it. It’s not that we are not using the public cloud,” said Joseph Sandoval, the cloud platform manager at Adobe.

Not all smooth sailing

Of course, OpenStack does have its weaknesses, and the most glaring is probably its lack of a centralized database solution, something both Amazon Web Services (AWS) and Google Cloud have. And the options available to OpenStack can sometimes result in design decisions that may come back to haunt less experienced teams later.

You need to have a chargeback or showback mechanism, said Doman, noting that it’s easy to overlook this by seeing the OpenStack deployment as an internal system. He cautioned: “To your end users, a private cloud with no billing is essentially free. Demand will be very high, and lead to overconsumption. The result was some zones that ran out of capacity earlier. This is one area where we had to rein [in].”

The duo also outlined various design missteps the team made, underscoring the complexity inherent to the flexibility and deployment options available in OpenStack. Elsewhere, early network decisions while good, made it harder to incorporate newer load-balancing and network capabilities that appeared in newer versions of OpenStack.

“Before you even get to OpenStack, you have to change how you are managing your data center. You need to have a very strong [foundation] to deal with the nuances of a [private cloud deployment],” noted Adobe’s Sandoval. “We took a very modular, composable approach. I think that’s where a lot of people get tripped up on. A lot of projects were late; many were delayed over getting the data center ready.”

Getting the word out

For now, the OpenStack Foundation acknowledges that more needs to be done to spread the word about OpenStack and to get people to give it try. On the latter, the Foundation unveiled the OpenStack Global Passport Program, which sees a number of OpenStack cloud providers offering free cloud resources for users to test out.

Interested organizations can hence take the opportunity to dip their toes into OpenStack through a free trial from a participating OpenStack public cloud provider – with around 60 availability zones around the globe to choose from. While this pales in comparison to the free trials offered by public cloud behemoths such as AWS – the process and services offered differ across providers, for instance, there is no question that it is a step in the right direction.

Elsewhere, private cloud providers are also finding ways to join hands to make a transition to OpenStack more seamless and appealing. Among others, a discussion is ongoing about a standard to provide seamless access across multiple OpenStack deployments, with the focus of providing users with a common experience.

Challenges no doubt will abound, given the complexity of technology and the many stakeholders in the OpenStack ecosystem. However, this is also something that the open model of self-governance at OpenStack is uniquely positioned to address. As it is, the open nature of OpenStack will only draw more users as more large enterprises outgrow their public cloud deployments.