No half-measures for Telia

At a time when some telecoms providers can’t seem to get rid of their colocation facilities fast enough, one Scandinavian company is making a power play for the market.

Telia Company is building Finland’s largest colocation data center in Helsinki, and is currently finishing the outer shell of the building. The first phase of the project will deliver 34,000 square meters of space and up to 24MW of power capacity - and the power supply could eventually support up to 100MW worth of IT equipment.

But it’s not all about the size: the facility in Helsinki will also become one of the country’s greenest – powered by a combination of wind, water and biomass, and exporting its waste heat to keep residential properties warm. The building has recently obtained Gold design-stage certification with CEEDA – a framework that looks at the efficiency of data centers – and is in the process of getting certified with LEED.

Construction of the building was somewhat delayed – originally scheduled to open at the end of 2017, the launch of the facility has been pushed back to April 2018, but Telia’s data center product manager Eero Lindqvist assured DatacenterDynamics that the project is on track. 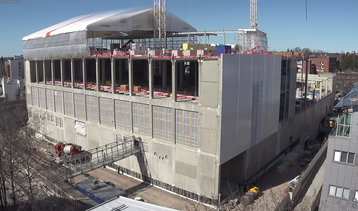 A statement of intent

Finland is no stranger to large-scale data center projects – thanks to its cold climate, cheap electricity and stable political environment, it has become a magnet for both commercial property developers and online service providers. Google and Yandex are famous examples, but there are hundreds of smaller data centers across the country, including those owned by Telia.

Telia Company is the largest telecommunications provider in the Nordics – expanded in a 2002 merger between Sweden’s Telia and Finland’s Sonera. It runs a healthy wholesale networking business and owns multiple well-known consumer brands, but despite operating a fleet of data centers, both internal and available to the public, Telia is barely known as a provider of IT infrastructure.

The company hopes to establish more of a presence in this market by erecting a massive data center on Valimotie 5, in the northwestern suburbs of the Finnish capital. The facility was designed by Royal Haskoning, an engineering, design and project management consultancy headquartered in the Netherlands.

“The network traffic is growing, the data volume is growing, the processing capacity is growing: more and more, we see that these things actually go hand in hand – so the customers are asking for more comprehensive solutions,” Lindqvist told DCD.

“They want cloud services, they want colocation, they want communications and networking services from one source – and that’s the reason we decided to invest in this area. I think, especially as we go to 5G, that we will only require more capacity and processing power. We actually need those capacities ourselves, but we also see that our customers need them too.

“We want to be an enabler for our customers in digital transformation, and we will provide the entire infrastructure service layer.” 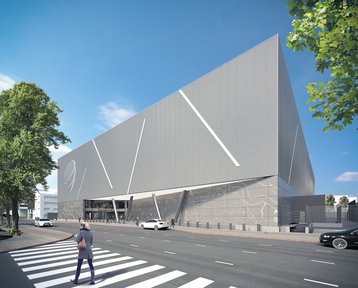 …and the expected result – TeliaSonera

Infrastructure in Helsinki should be cheaper to run than in major colocation hubs of London, Frankfurt and Amsterdam. According to Lindqvist, electricity prices in Finland are on the same level as Sweden, with Norway currently enjoying the cheapest electricity in the Nordics.

Energy in Northern Europe is significantly less expensive than in Western Europe, thanks to shared infrastructure across the region, presence of heavy industries and abundance of renewable energy sources.

Another benefit of locating your servers in Finland is the country’s respectful attitudes to data protection: Lindqvist told DCD that increasing numbers of customers are concerned about the advent of the General Data Protection Regulation – a set of laws that will define the use of personal data within the EU, set to come into force in May 2018. GDPR promises greater protection for users of online services, but requires much of the data to stay within the EU, of which Finland has been a member since 1995.

The climate is also an important consideration - the upcoming Telia facility could use free cooling 11 months of the year, and export waste heat to nearby Espoo when electricity is cheap – in cooperation with local utility provider Fortrum, which runs similar schemes across the Nordics.

“Telia has recognized that by building-in the lowest energy cost per unit of compute/storage attainable within CAPEX constraints, it has locked-in a low energy cost-price, thereby providing the bedrock for the future competitiveness of its services. The use of low carbon energy and waste heat reuse will also mitigate against risk of increases in carbon pricing.”

He adds: “Telia decided to incorporate CEEDA’s processes for assessment and further improvement recommendations right from the start. Aside from providing third party verification of the work of design consultants and contractors, the process provides specific recommendations at the design-stage and then, in 2018 when the facility goes live, for the fully operational facility. Once operational, new CEEDA tools will provide on-going quantitative guidance on maintenance and implementation of improvement measures.”

One of the more unusual aspects of the facility is its racks – at 52U, these are considerably taller than the traditional 42U cabinets, enabling more efficient use of space.

In terms of power consumption, the facility has been designed to support an average of 2kW per m2 or 6.5kW per rack – however individual customers can go up to 20kW per rack.

“As we are doing the first phase in a new data center, we are doing it with rather traditional technology,” Lindqvist said.

“But what we try to ensure is that our data center is flexible enough, so we can take new technology as it becomes more commonplace and also provides real business benefits. We are looking at Open Compute, for example – how that might change the way you utilize your data center.”