Minimize the risks of working in a data center

Going to work can be risky: around the world, someone dies at work every 15 seconds, according to the UN International Labour Organization. In the US, according to the Occupational Safety and Health Administration, 12 people die every week from work-related causes, and in 2013 a total of 71 people died from electrocution at work.

The UN International Labour Organization also reports that in 2013-14, 28.2 million working days were lost in the UK due to work-related illness or injury, at a cost of £14.2bn.

If you work in a data center, of course you don’t need to be quite so worried. The environment is carefully protected, and IT equipment is cosseted, so rarely does anything go wrong. Very few accidents are reported in tech facilities, so if you want a safe place to work, data centers should be high on your list.

But you should still keep on top of safety at work. It’s an obvious moral duty – and it’s also required by regulations such as the UK’s Health and Safety at Work Act (1974).

Workplace injury can also be bad publicity. In the past few months, two relatively minor accidents in data centers received widespread media coverage because of where they happened: in Apple facilities. What happens at Apple rarely stays at Apple, and no matter how hard the company tries to manage news coverage, media keeps a close watch on it.

So, when Apple sites suffered a fire and a chemical leak, they made headlines. The fire started among solar panels on the roof of Apple’s Mesa site in Arizona. No one was injured at that site, but when chlorine used for water purification spilled in Maiden, North Carolina, five people were hospitalized. They were all back at work the next day, however.

Besides fire and leaks, a more obvious danger in data centers is electric shock.

Chris Crosby of Compass Data Centers recently pointed out that this risk does increase if the data center operator demands continuous operation, so staff are expected to work on live equipment. Electrical equipment in a data centers can increase the risk of fire; the chemicals in fire suppression systems are another risk. 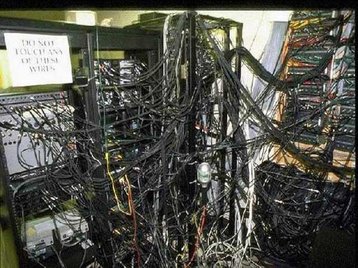 The way it used to be

There are other factors to consider, too, like staff training and experience. New workers have a higher risk of injury than those with more experience and a longer record. The UK’s Health and Safety Executive found that workplace injury is four times higher for workers in their first few months of employment than for those who have been there at least a year.

The data center is a young industry and the proportion of new workers is likely to be high. The most obvious way to keep staff safe is by offering training.

All told, the risks of working in a data center are small, though real, and it’s worth making an effort to reduce them.