Is it really that bad? Yes, say the people who are keeping one of Italy's largest data centers online

Italy is one of the countries suffering most from the novel coronavirus, covid-19. And that is affecting how digital infrastructure is operating, according to one the country's largest data center operators, SuperNAP Italia in Milan.

Italy has moved to a policy of widespread quarantines and lockdowns for much of society, with Switch's facility in the North of Italy where the effects of the coronavirus have been extreme. We spoke to SuperNAP Italia about how the facility is coping with the crisis. 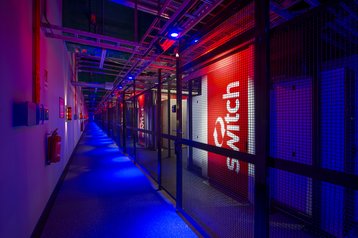 “All public utilities can keep running and should keep running, and we count as a public utility,” Alison Gutman, communication manager at SuperNAP Italia, told DCD, over the phone. Isolated at home like most Italian residents, Gutman explained how the company is dealing with the pandemic sweeping the world.

Data centers will still need to operate during the crisis, providing business continuity and keeping cities online as more people shift to remote working than ever before, she said.

SuperNAP Italia has adopted remote working itself: since the end of February, everyone that doesn’t need to be at the data center has worked from home said Gutman, “with our essential operations staff still being on-site to continue guaranteeing 100 percent uptime.”

For the few staff that have to travel to work, several steps have been taken, including ample access to antibacterial gel, and a daily deep clean of surfaces and all of the equipment.

“The staff are maintaining the safety distance between them while they're working,” Gutman said. “They're only going from home to work. So when they're not at work, they have to respect the same laws that everyone else is respecting, which is to stay home.“

During their work commute, the staff members carry documents that allow them to circumvent the general travel ban. “In addition, our company has provided a supporting letter that explains that they have a necessity to come to work because we are providing a public utility. Supporting that letter are two documents provided to us by the Minister of Economic Development and AGCOM (agency for communication) that confirm such.”

Those employees work in shifts, Gutman explained, “so we have enough staff that if someone was infected on one shift, we have other staff that can work in their place. And we're doing shifts for some of the teams that are working in groups.

“So one group of three is working one week and then another group is working another week so that they avoid any cross-contamination.”

Currently, no one at the company has exhibited signs of the virus, but employees (the company does not use contractors) are allowed to have indefinite sick leave, if need be. The hope is that the current travel restrictions will slow further spread in a country currently dealing with more than 12,000 cases and 827 deaths.

Should the matter deteriorate further, though, SuperNAP is preparing for the possibility of a total lockdown: “We will always have someone [at the data center], so if an immediate quarantine was called where no one can leave, there will be someone present.”

The company has had more food delivered - “enough to support at least five people in case of the total lockdown,” and Gutman said that the staff were prepared to have to stay at the data center for a long period of time if need be.

When asked whether SuperNAP was prepared for those employees also leaving, Gutman said: ”There never is and never will be a moment when it goes completely unoccupied. It is technically capable of running on its own. But our operation staff, part of our protocols is that there's someone always there.”

It appears unlikely that Italy's electric grid will go down, but the company says that it has a power system composed of three independent, color-coded power sources “to guarantee extra high resiliency."

Gutman said: “In case of a total loss of power, we are equipped with several emergency DCCP generators that can ensure up to 80 hours of continuous operation of the entire facility (60 percent of load considering 270 l/h fuel consumption). Furthermore, we have contracts with diesel suppliers to arrive within 6 hours to top up fuel and continue to do so as long as necessary.”

At the same time, the data center has experienced more usage as people shift online instead of communicating in person. “Over the last few weeks, we have experienced about a 15 percent increase in power consumption and Internet traffic,” Gutman said. “Our data center has a capacity of several Megawatts so we are able to react promptly to these requests."

Sherif Rizkalla, the company’s CEO, added: “Work in Italy has not stopped, but has taken on another form. In the data center world, we are seeing this via small increases in consumption and bandwidth.

“SuperNAP is ready to face the crisis with business continuity and 100 percent uptime; we are structurally and technologically the most suited to do so, and to support remote work and maintain production to protect the country as much as possible throughout this pandemic."

It is not clear how the pandemic will continue to impact Italy, or the wider world. “I hope that people are learning,” Gutman said. “There's a lot of criticism [of what is happening in Italy], but it's not so easy. Just a couple of weeks ago, some people were confused, and saying ’is it really that bad?’ And it really is. Just take it seriously.”

Gutman did caution against panic, however: “I think that the message here in Italy that we want to give to the world is that, everyone is doing what they can. The work hasn't stopped. It's not an apocalypse. We are having this crazy experiment with work from home and smart working and we're moving ahead as much as we possibly can and working together to overcome.”