Open source is “pervasive” according to the latest Black Duck survey

The Future of Open Source report from North Bridge and Black Duck Software is an annual tradition, now in its ninth year of steady research about open source. This year it might  might now more aptly be titled the Present of Open Source, as the vast majority of respondents are now betting their companies on shared code. 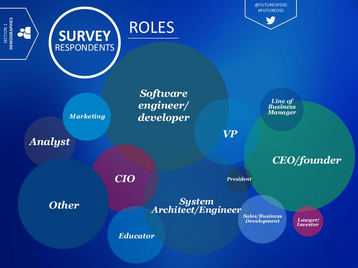 What companies, and which people, are included in the survey? North Bridge and Black Duck report 1,300 respondents this time out, up from 453, for example, in the year 2011, with graphic (right) showing the kind of people in 2015.

“The numbers don’t lie. It has been another incredible year for OSS. Open source is driving innovation for the world’s most successful companies,” says Dries Buytaert, CTO and co-founder of Acquia a firm featured in the report for recent work.

Acquia and weather.com integrated the Drupal platform to create and distribute content quickly, present contextual results for specific users, and deliver this through an elastic, cloud infrastructure.

The survey also found that in half of the companies surveyed, more than half of the engineers are engaged in open-source projects. The other half of companies presumably also include significant numbers of engineers similarly engaged.

Among the companies surveyed, 39 percent said they will start their own external OSS project within the next two to three years, up from only 30 percent who said the same thing in 2014. This nine-point increase represents a 30 percent gain in interest among the surveyed companies.

Further, 47 percent said they plan to release open-source internal tools and projects in this timeframe, and 53 percent expect to reduce barriers to employee participation in OSS. This latter number is up from 40 percent in 2014, representing a 32.5 percent increase in just a single year.

So, is open source now the default option?

Another finding was 66 percent of respondents saying they consider OSS options before proprietary software alternatives. The report’s authors see this as proof that “open source is the default approach for software.”

This claim should be thought through, as it could merely indicate that the surveyed companies look to OSS first for additional software, as part of a measured migration to open source. In addition, many traditionally proprietary vendors also make various claims to being open source these days. And further, considering OSS before proprietary software doesn’t necessarily mean committing to it. Many companies could simply be doing some due diligence to satisfy a management directive. 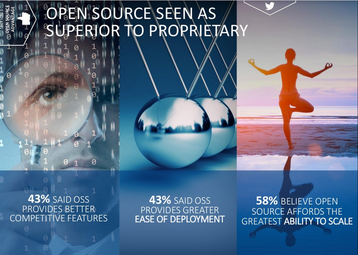 Paul Santinelli, a general partner at North Bridge, states in the report: “Open source has solidified its position as the default base for software development. It is infiltrating every facet of the modern enterprise and is outperforming proprietary software packages in quality, cost, customization, and security.” He also states that “In the coming years, we will see open source unlock the potential of a new generation of technologies,” including those associated with cloud computing, Big Data, and the Internet of Things.

The report also cites some perhaps unexpected advantages of using open source. For example, 50 percent of survey respondents said OSS helps them find and recruit top talent. (The flip side being that 50 percent did not say so.)

Alongside Acquia, the report cites other success stories including the Bay Area Rapid Transit (BART) system website, route planning for a major ferry operator in Norway, and a streaming video upgrade for Discovery (Channel) Education.

Taking everything from this report into consideration, it appears as if the open-source glass is at least half-full. My own, empirical impressions of the present state of open source were gleaned at several events this year.

The Cloud Foundry Summit drew about 1,500 CF fanatics to the Santa Clara Convention Center in early May. Whereas a year ago there was talk of PaaS (platform-as-a-service) software such as Cloud Foundry being subsumed into infrastructure offerings from Amazon, Salesforce, and others, CF seemed alive and well in Santa Clara.

There was a lot of enthusiasm stemming from the creation of the non-profit Cloud Foundry Foundation a few months earlier, and some optimistic speeches given by Foundation CEO Sam Ramji.

There were also some new presentations about major CF projects being undertaken by Allstate, Comcast, Garmin, Humana, Kroger, Lockheed Martin, an GE Software.

(Cloud Foundry is an open-source project originally developed at VMware, and is today offered in its pure OSS form as well as in proprietary versions from IBM, HP, the VMware spinoff Pivotal, and CenturyLink.)

A week later, more than 6,000 people attended the OpenStack Summit in Vancouver. OpenStack is infrastructure, and has been afflicted with doubts about its past and future. The primary concern is not a lack of popularity per se, but a very open nature that has allowed community members to stretch the core code into mutually unintelligible offerings.

OpenStack Foundation executive director Jonathan Bryce maintained optimism, speaking of an “OpenStack-powered planet.” Community members stressed the “big tent” aspect of OpenStack at the summit, and an “inter-cloud” federated model with OpenStack Kilo (the software’s eleventh release), which has more than 400 new features designed to support software development, big-data analysis, and application infrastructure at scale. A major OpenStack initiative from Walmart was cited as evidence of OpenStack’s progress.

Then there was the Open Compute Summit, held a few weeks earlier at the San Jose Convention Center, during which former Open Compute Project Foundation Executive Director and current Vapor.io CEO Cole Crawford presented his vision for the 21st century data center.

The Open Compute Project has been around since 2011. Its mission is to “design and enable the delivery of the most efficient server, storage, and data center hardware designs for scalable computing (within) a structure in which individuals and organizations scan share their intellectual property with Open Compute Projects.”

As with all things involving openness, the Open Compute Project requires management and worker-bee buy-in to the concept. It’s not just a series of technical problems, but also one very large management and philosophical challenge.

Open-source may not yet be the default, as the North Bridge and Black Duck Software report states, but there does seem to be a certain inevitability to it. To me, to strive toward open-source and open computing is to strive toward socioeconomic improvement on a global scale. There’s the potential for innovation, particularly when localized, that comes from a widely distributed community rather than a closed shop.

Then, open computing offers the potential to achieve dramatically lowered levels of power consumption, which bodes well for the world as a whole. I’ve led a small team over the past few years that studies the relative development and dynamism of IT environments and ecosystems in more than 100 countries.

With per-capita electricity consumption in the developing world typically reaching only three percent to five percent of developed-world levels, it’s painfully clear that significant progress can’t be achieved simply by building out electrical plants to serve growing economies. There must be improvements in providing power to the world.

The Internet of Things in the areas of Smart Cities, Regions, and Nations has the potential to drive dramatic economic improvement, if modern data centers (many, of not most, located at the edges of IoT deployments) can deliver computing power with new efficiency. Economic growth envisioned as a function of the IoT must also be equitable, and not merely further enrich the thin upper strata of societies.

Thinking optimistically, one could say that the transparency and community-building demanded by the world of OSS and open computing would also need to be present within the governments and business communities of nations that are improving themselves via modern technology.

That’s the big picture, and perhaps a utopian vision only. More concretely and currently, it is clear from the 2015 Future of Open Source study that open source is making strong progress, that corporations are increasingly favoring it, and that next year’s report should continue this optimistic tone.

Roger Strukhoff is Executive Director of the Tau Institute for Global Research, with offices in Manila, Philippines and Chicago. He is also an advisor to Stacking IT.