Will a commitment to a cleaner planet really bring in customers?

Three and a half years ago, in a column for a different website, I asked the question: will flywheel UPS ever be a viable and cost effective option? Since then, the vendor options for flywheel and hybrid UPS systems have continue to grow, but the question has remained unanswered. The systems remain expensive and somewhat limited in application. But this week I was contacted by the vendor that caused me to pose that initial question.

The vendor, ActivePower believes it has reached the point where the flywheel UPS becomes a viable and cost effective solution with the announcement that its 750 kVA UPS is at cost parity with a double conversion UPS, with batteries, at an equivalent power level. ActivePower isn’t the only vendor taking a shot a making the flywheel UPS a standard for data centers, but they were one of the first to tout the environmental improvements implementing this technology can bring. While there are many companies that offer flywheel power systems, we’ve included a list at the end of this story of those that have a focus on data center UPS systems.

Show me the money 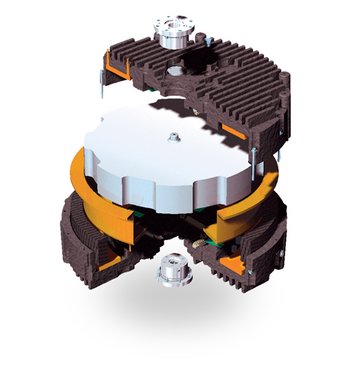 All flywheel energy systems use the same basic concepts to store energy. A rotating mass, with as frictionless a rotation point as possible, spinning in a vacuum. Power is stored by rotating the mass of the flywheel; it is generated by the inertia of slowing down that same flywheel. Power generation times are measured in seconds for a single system; most vendors allow for their units to be installed in parallel in order to increase the length of time that power can be provided before the switchover to the alternative power source, be it secondary providers or backup generators.

Two schools of thought exist on the flywheel itself, as represented by two of the top vendors; mass versus speed.

Powerthru, which uses a carbon fiber composite flywheel goes with high speed while ActivePower uses a steel flywheel. Powerthru points out on their website that “Kinetic energy is roughly equal to mass times velocity squared. So doubling mass doubles energy storage, but doubling the rotational speed quadruples energy storage.” Despite the difference in approach to flywheels that these companies represent, the real competition is not between flywheel UPS vendors, but between flywheel technology and the inertia of data centers in respect to making a change from battery backup UPS systems.

Flywheeel UPS vendors take aim at the major weakness of the battery UPS; the batteries themselves. Lead-acid batteries of the type used in data center UPS systems are heavy, expensive, require notable maintenance, lose their ability to hold a charge and require complete replacement at relatively short intervals.

They put an additional load on data centers by requiring a monitored environment and a relatively narrow operational temperature range. Their weight means that floor loading can be an issue, and outgassing, with high-end wet lead acid batteries, is something that needs to be monitored and vented.

Additionally, batteries in a backup UPS system will need to be replaced at regular intervals through the service life of the UPS, anywhere from five to ten times in the standard 20 year expected life of a data center facility.

These additional costs over the service life of the UPS system have been used to offset the higher initial acquisition cost of flywheel systems when compared to battery backup. When OPEX is compared the flywheel has a significant advantage over the projected service life, offering rough parity when OPEX and CAPEX costs are compared over that time period. This is what makes ActivePower’s announcement of a comparable CAPEX so significant; the OPEX advantages then go firmly in favor of the flywheel UPS, making it significantly easier to rationalize the decision to go with flywheel for corporate data center EPC needs. 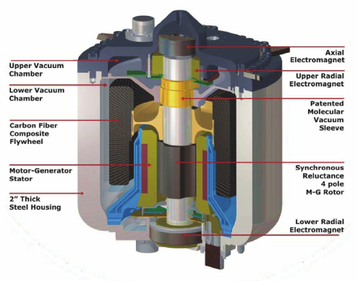 It’s not easy being green

Beyond the more easily measured operational efficiencies, flywheel UPS systems also have a much greener environmental footprint than traditional battery UPS. The most obvious advantage is the removal of lead acid batteries from the equation. From the plastics of the cases to the acid and lead they contain, there is little that is environmentally friendly about batteries. Over the lifespan of a traditional UPS that represents hundreds of pounds that needs to be carefully handled and properly disposed of or recycled.

Even in a hybrid flywheel/battery UPS system, this particular environmental impact is reduced because the nature of the hybrid system is that the workload on the batteries is reduced, increasing their lifespan, thereby reducing the number of replacement cycles they need to go through.

ActivePower claims as much as a 40 percent savings in TCO, achieved via a 98 percent energy efficiency, lower expense to install and commission and the nature of the energy storage. Savings are also achieved due to higher reliability, where they claim that their Flywheel systems are 12 times less likely to fail that a traditional UPS, which results in less maintenance and operational disruption. All Flywheel UPS systems generally require significantly less maintenance that battery systems, so that factors in to the overall reduction in OPEX.

A selling point that ActivePower also focuses on is that over a 15 year lifecycle a flywheel UPS creates more than 40 percent less carbon pollution. Given that all flywheel UPS systems require less energy to maintain their charge than an equivalent battery UPS, there would be a direct correlation between the environmental cost of producing the power they use to charge and the flywheel system. And, of course, without the need to manufacture batteries, itself a somewhat environmentally unfriendly process due to the elements required to produce them, the overall environmental footprint of a flywheel UPS is one of the smallest of any device used in that power range within a data center.