As the world’s largest electronic manufacturing service provider, Foxconn makes iPhones and iPads for Apple, Kindles for Amazon, and gaming consoles for Sony and Microsoft. It also has its eyes on the IT world - and the data center market in particular.

The Taiwanese manufacturer has a lot of irons in the IT fire, ranging from hardware up to cloud services. It has just announced a partnership with Japanese vendor NEC, to roll out cloud services by the end of this year. Meanwhile, it runs its own data centers, as well as manufacturing IT hardware, including a specific range of data center equipment with HP. It even builds HP’s container data centers in a factory in the Czech Republic. 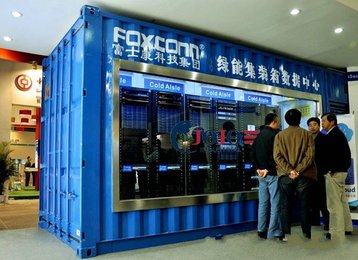 It’s not hard to guess why Foxconn is diversifying. Margins have been contracting in the consumer electronics sector, so the company’s contract manufacturing profits have been dropping,

Meanwhile the cloud is growing - especially in Foxconn’s home region.  China’s cloud market is growing at an annual rate of 50 percent and will reach about 1.36bn CNY ($220m) by the end of 2015.

This is drawing in firms form outside the sector, such as China’s steel giant Baosteel, which is operating cloud data centers for China Telecom and China Mobile, through a holding company, Shanghai Baosight Software.

In partnership with NEC, Foxconn will build an infrastructure-as-a-service (IaaS) platform, aimed at customers within Taiwan. It will be built in Foxconn’s Kaohsiung Data Center, and offering services built using Software Defined Networking (SDN).

“Information processing technology is a cornerstone in Foxconn’s sustainable business strategy and we are pleased to be working with an industry-leading company like NEC to boost our capabilities in data center solutions and to augment our comprehensive suite of information and communications technology solutions,” said Ed Wu, Corporate Executive Vice President of Foxconn.

Foxconn has also formed an alliance with China’s Alibaba for wireless networks and cloud services in Mainland China, and last October, it established a cloud services and infrastructure joint venture with 21Vianet, one of the largest carrier-neutral data center service providers in China.

The company also makes hardware for data centers. In April 2014, Foxconn teamed up with HP to create a new line of cloud-optimized servers. The new product line will complement HP’s existing ProLiant server portfolio, including Moonshot, but will be specifically aimed at the computing needs of the world’s largest service providers.

And In the middle of 2014, Foxconn announced a set of initiatives to develop energy-efficient containerized data centers that can integrate renewable energy sources, aiming to achieve a power usage effectiveness (PUE) of between 1.25 and 1.30.

Its efforts have paid off. In November, the electronics manufacturer was granted several patents for the design of shipping container-based data centers by the US Patent and Trademark Office (USPTO) . These include patents for the use of solar power and for methods of cooling servers inside the container. However, there is currently no information on when such products could appear on sale. 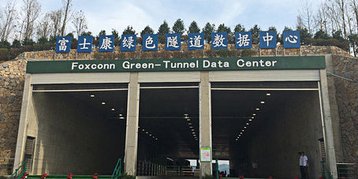 In April 2014, Foxconn secured a contract for building carrier-neutral internet data centers for 21Vianet. The two companies will also cooperate to develop cloud services for  the Chinese market.

Currently, Foxconn operates two data centers in China, including one in Guiyang in Southwest China, and one in Kaohsiung of Taiwan.

As we reported last year, the tunnel-like Guiyang site adopts a fourth-generation containerized data center design, and deploys a natural ventilation system for cooling which dispenses with the need for backup temperature control systems, claiming to achieve an average PUE below 1.1. The facility uses servers which are jointly developed by HP and Foxconn.

So the manufacturing giant is putting its resources to developing in this new area, in a seemingly very effective manner.