Thanks to its demographics, its energy grids, and its politics, Europe is getting ahead on energy efficiency

Europe has a large population spread across multiple countries - there are 28 in the European Union and around 50 in the continent as a whole - with a huge and growing demand for mobile and digital services. The nations have a wide array of energy sources, including nuclear and renewables, and a climate which goes from the temperate heat of Naples to the Arctic cold of Northern Sweden.

All of that makes digital infrastructure complex to build and deliver, but there’s a long history of collaboration in the region on electricity grids, communications networks and on fundamental industrial and scientific research.

So when Europe gets together to consider how to make its infrastructure more Energy Smart, it’s well worth listening to the ideas that emerge.

That’s what happened at DCD’s Energy Smart event in Stockholm earlier this year. 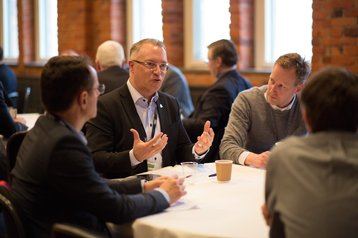 The overall message was integration. Data centers, like any other part of the world’s infrastructure, can’t be treated in isolation. Their energy use must be linked to the production of renewable power, and their reliability features can contribute to the reliability of the grid as a whole.

Waste heat is a useful resource, the conference heard. It costs money to cool the equipment in a data center, but much of this can be offset with revenue if the heat can be recovered and used.

This has been a theory for some time, but it has rarely been put into practice. At Stockholm Data Parks, run by Stockholm Exergi, money is changing hands for waste heat, according to the head of the Parks, Erik Rylander: “Cooling of the data center as a service is offered for free in exchange for the excess heat when the data center load reaches above 10MW. In a second option, the cooling is managed by the customer and Stockholm Exergi purchases excess heat at a price reflecting its alternative heat production cost.”

Meanwhile, the money that is put into creating uninterruptible power supplies (UPS) is a necessary investment, which can actually produce a revenue stream, if those UPS systems are shared with the grid, according to Jussi Vihersalo, business development manager at Eaton.

A 500MW data center will have around 83MWh of energy stored in batteries, as a reserve for power failures. However, the energy could also be used more flexibly to help balance the grid in three ways. At a busy time, the data center can be run from the UPS to reduce demand; at times of higher demand, some of their energy can be fed into the local grid, and at times when too much renewable energy is being produced, the batteries can soak up some of the excess.

“Data centers can balance the power reserve, by using batteries instead of fossil fuels, and help to compensate the volatility renewable energy creates,” said Vihersalo. “The next step in optimizing data center assets is the better utilization of the electrical infrastructure.”

Despite the promise of money, data center operators have been skeptical, or downright hostile to this idea, fearing that other calls on their UPS will increase the risk of failure, but Vihersalo said this need not be the case. Battery sharing algorithms will include an allocation so critical backup is always allocated, and the facility is not disconnected from the mains when the UPS is powering it - so effectively the two sources switch, and the mains becomes the backup.

Other ideas are focusing on using electricity better within the data center. Replacing AC power with DC has been proposed for a long time: “There are no technical reasons to use AC power inside a data center,” said Stefan Lidström, product manager, DC power at Comsys.

Even more power distribution losses can be removed by cogeneration, which produces power on site. This can be taken to the extreme by using fuel cells to generate power within the rack - an approach being tried by automotive manufacturers and IT firms.

A lot of work on this approach is being carried out in the US, by Microsoft and the National Renewable Energy Labs (NREL), but Daimler and Mercedes-Benz are also involved. A lot of fuel cell work has come from the automotive industry.

A European project called Everywh2ere is working on a fuel-cell based replacement for diesel gensets used for backup at data centers, which will use cells from PowerCell, a Swedish Volvo spin off. Meanwhile, a French company called PowiDian has produced something similar - a 30kVA portable fuel-cell power source.

All this will need more intelligent management, which is often referred to as software-defined power (SDP). “Like the broader software-defined data center (SDDC), SDP is about creating a layer of abstraction that makes it easier to continuously match resources with changing needs,” said Andy Lawrence, research director at the Uptime Institute.

SDP can make good use of microgrids, where local electricity sources and loads are synchronized with the traditional grid, in an extension of the UPS-sharing ideas mentioned above.

But the level of integration could work best at a slightly larger scale - the city, according to a number of Energy Smart presenters. “Companies and cities will lead the way,” said Anders Egelrud, CEO of Stockholm Exergi, pointing out that conurbations have the flexibility and size that can make a real difference to energy use and policy.

This was underlined even further by Karin Wanngård, mayor of the City of Stockholm: ”I want Stockholm to become an international beacon for how to run a truly smart and sustainable city,” she said. “The Paris Climate Agreements cannot be achieved without actions by cities.”

Despite a growing population, Stockholm has reduced the emissions caused by heating (see Box: How to do CHP). The rest of Europe, and the rest of the world could learn a lot from this.

How to do CHP

Stockholm has one of Europe’s largest district heating systems, and is actively encouraging data centers to provide their excess heat alongside the output of combined heat and power (CHP) plants which burn biofuel and waste.

The district heating and cooling is provided by Stockholm Exergi, a company co-owned by Fortum and the City of Stockholm. A large part of the heat comes from Värtaverket, one of the largest a CHP plants in Europe, which burns woodchip waste from the timber industry.

The fuel is brought in by ship from the forests, and burnt in a fluidized bed system which regulates the temperature to minimize carbon monoxide (low temperature) or nitrogen oxides (high temperature). Ash is returned by ship to fertilize the forest.

The city plans to be carbon-neutral by 2040, and has an energy system which balances multiple inputs and demands, all of which depend on other factors including the weather. Renewables now make up the majority of the energy input, and sources like wind can sometimes produce so much that the effective energy price is zero.

Meanwhile, demand for hot water from the heating system is so high that CHP plants must continue to operate, sometimes using their electricity output to run heat pumps and create more heat.

When DCD visited, Värtaverket was producing 130MW of electricity, 400MW of heat and some 22MW of cooling.

From 2013 to 2016 the construction of a new biofueled CHP plant was underway for the new Värtaverket - one of the largest bio CHP plants in Europe.

Microgrids and energy storage will be a major theme in the Energy Smart Focus Day which kicks off DCD’s San Francisco event, opened by Robert Weisenmiller of the California Energy Commission. Sessions will also cover renewable energy and sharing backup, as well as taking the lid off new cooling technologies.