DCD>Zettastructure: Finding energy solutions when faced with an antiquated grid

Relocating to the Nordics, installing emergency gas generators, or sitting tight and waiting for distribution network operators to build the infrastructure?

When choosing a location to build a data center, several factors come into play: is it an area prone to floods, storms, or seismic issues? Is the connectivity good enough to attract customers? What of the available skilled workforce? What is the climate like, and does it allow for cost saving systems such as free cooling? Does the area offer tax incentives for data center operators? Most importantly, does the grid have enough power supply?

Not up to the task

All of these factors can make or break construction plans. But with data centers consuming ever more power, the condition of the grid a constant source of concern - power availability challenges can delay the construction and limit the scope of future expansions. The initial stages of the fit-out process require even more power on top of ordinary requirements to test bus bars, UPS systems, and run load banks.

A poorly supplied grid can also affect operations once a data center is up and running, not only if the grid supply is not available on time, but by suffering from blackouts caused by natural disasters (say, due to storms, such as those that have ravaged parts of the world in recent months).

And distribution network operatiors that own and operate the power lines which bring electricity from the national transmission network to the point of sale, can take time to set up the necessary cables and towers to do so.

When these issues occur, data center owners are presented with various options: one can chose a different site, or delay the project, or turn to temporary generators. 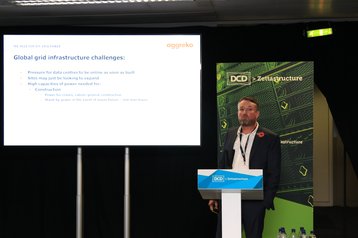 Diesel generators - as opposed to gas generators - being the former industry norm, are still a fairly common solution. They can support significant loads, they’re cost effective for short periods of time, they’re quick and easy to install and they are widely available on the market. On the other hand, there are long term environmental implications as diesel gensets let off high levels of pollutants, and for this reason are often challenged by local communities and councils.

According to Aggreko, a Scottish company specializing in generator, industrial heater and cooling equipment hire, natural gas generators can address these concerns and add a number of benefits.

While speaking at at DCD’s annual Zettastructure event, Billy Durie, the company’s head of business development for Europe, told the audience that gas generators were easily and rapidly deployed, offering tailored levels of resilience depending on customer expectations, with lower running costs compared to diesel, while also being a ‘greener’ solution.

He added that gas generators are scalable, so one can take into account the site requirements - whether full energy capacity must be provided from the first day of operation, or if it can be deployed incrementally as space is sold, because gas generators are, in effect, big building blocks. Finally, in most cases, gas generators are completely independent from the grid.

In Ireland, local provider EirGrid plans to modernize the country’s grid over several years, but it has admitted that it cannot keep up with increasing energy demands caused by the rapid construction of data centers in the region.

Microsoft has decided to address the issue by building its own power plant, with 16 gas-powered generators to provide 18MW of capacity to one of its four data centers in the Grange Castle Business Park.

And in the very same industrial area, US provider EdgeConneX commissioned “a Scottish company” - highly likely being Aggreko - to install gas generators to power its €30m facility.

This type of solution is being investigated on a wider scale by the UK, with Derek Webster of Andget Limited calling it ”the lesser evil,” as natural gas slashes pollution levels, containing significantly less sulfur, nitrogen, and carbon dioxide compared to oil and coal.

Another means of slashing costs, as many hyperscalers have done, is to relocate to the Nordics, said Patrik Öhlund of Node Pole: ”It’s very clear to everybody that the Nordics can offer almost unlimited sustainability and low footprint. It’s not discussed as much as it could be in my opinion; as an industry we have a responsibility to do things wisely.”

Webster agreed that compared to the UK, the possibilities in terms of capacity were significantly higher in the Nordics: “The UK is a London-centric market, where it’s difficult to find 14-30MW sites. In the Nordics it’s not difficult, and it’s very fast.”

But, Öhlund stated, even with such an attractive offer, heading for the Northern Europe wasn’t a clear cut solution:

”The hyperscalers already have this figured out, they have their locations close to the consumer, and their massive backups in the Nordics. We must ask: ’can I shift some of this workload to the Nordics, and shift some of the others to the premium locations?’ It’s a balancing act. The companies that can optimise this between different locations, to be close to customers and scale and rely on green power have won.”

Power grids that are too slow to adapt are not a geographically localized problem, and plenty of data center providers in metropolitan areas around the world have been faced with similar issues.

According to Adam Tamburini, e-shelter’s senior VP, even in Germany the grid has gone from having an abundance of available energy to suffering from the same sorts of problems as in the UK, Ireland, the US and the Netherlands.

“The situation with power in Germany has changed. 10 years ago when I explained that I would pay some money to be connected to the grid in the UK, and that six to 10 months later they would come back with a quote, they used to laugh. When you asked for a power quote in Germany, the only decision you had to make was whether you wanted to stay on hold, or if they should call you back.”