DCD>Webscale: Bring on the microgrids

To escape the grid, build your own

The challenge of supplying data centers with electricity is not new, but it is one that gets more difficult by the day.

With utilities struggling to provide enough power, increasing consumer demand for renewable sources, and the ever-present risk of backup power system failure, the industry has a growing problem on its hands.

But what’s the solution? Over a series of talks at DCD>Webscale Energy Smart focus day in San Francisco, speakers discussed one potential answer: turning to microgrids.

To some extent, data centers can already be seen as microgrids, able to survive for short periods on their own. “When the grid power goes down, the UPS kicks in, then the generator takes over. When the power comes back, we shut down the generation, and go back to the utility company,” Carsten Baumann, director of strategy for IIoT & microgrids at Schneider Electric, said.

But in this scenario, the decision to switch from the grid is essentially made by the utility - as the grid fails, the data center operator’s hand is forced. With advanced microgrids, “we make the decision,” Baumann said. “If the power is good, green and cheap, buy it from the utility. If not, do it from the advanced microgrid. That may change over the course of the day. To make that decision, I need a smart system that looks at the cost, the sustainability, the weather, and more, without needing a human.”

By having the infrastructure in place to support an advanced microgrid - more energy storage, perhaps some photovoltaic cells and fuel cells - and the software system to operate it, data centers can reduce their reliance on the grid when electricity costs are high, turning to cheaper local energy. They can, when conditions are right, be paid doubly for doing this.

“Load is going up, so power generation needs to go up and more generation plants need to be built, but we’re not doing that here in California,” Douglas Nordham, associate principal at civil engineering consultancy Arup, said. “So programs have really started since 2002/3 to consume less - ‘a negawatt is the same as a megawatt’ - and the utility will pay you for reducing your load at certain times.”

Before the arrival of advanced microgrids, reducing the load really wasn’t an option for data centers, Nordham said, but now the opportunity is there, and can lead to financial gains. “How much do you get paid for demand response? It depends, but it’s about $100,000 a MW a year for every MW you reduce.

“The other advantage is that the power company might tell you the day before that they need this, which could be when they’re about to suffer a blackout or a brownout. If you’re in the DR program, you get advanced notice that the utility is going to have some power problems. You wouldn’t have that if you weren’t part of the program.”

Data centers don’t have to do reduce load every time, and can opt out from reduction requests. “But generally what you’re going to do is automate it,” Nordham explained.

Demand reduction also has marketing benefits, he said. “One of the folks I worked with had a data center in Times Square, New York. They had a big stock ticker with prices on it outside, and then during events they changed it to ’we’re reducing energy use to save the grid.’ They got a lot of good PR out of it - that sign, by the way, consumed 72kW.”

But while microgrids can provide long-term cost savings, they do require some upfront investment. “If I try to sell a microgrid to a data center company with a payback of 18 years, they’re going to kick me out of the door,” Baumann said. Utility companies, on the other hand, are accustomed to power plants with returns in the decades, which is why Baumann believes the right approach is Energy-as-a-Service.

Even Schneider, one of the world’s largest suppliers of power distribution equipment, didn’t build its own data center microgrids - it contracted companies like Duke Energy to create the infrastructure, and simply pays to use it. 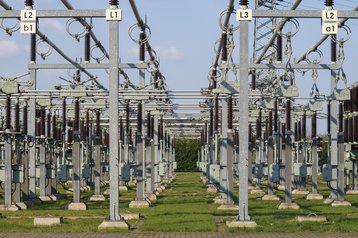 How the microgrid is built, and what components make up its systems, will depend on one’s location, Russell Carr, electrical engineer at Arup, said. For example, on the West Coast of the US, “electricity could be restored in a week in San Francisco after an earthquake, but gas can take months.” On the East Coast, on the other hand, there are “more wind-based events, which impact power lines, so underground gas is much more reliable.”

As for batteries, lithium-ion chemistry currently leads the charge - but is itself available in different compositions that have different benefits, from higher density to faster discharging. Baumann predicted that multiple varieties will be adopted, working in concert. UPS systems will require fast discharging to take over during sudden grid failures; larger microgrid batteries store more energy, but can take 200-250ms to supply it, making them too slow for a UPS.

The other question data center operators need to ask themselves is how much energy they are willing to give to the grid. “How much battery do you really need on your UPS? Some older guys say 15 minutes, but others say six minutes,” Baumann said. “So you can use energy from the UPS for the grid, but don’t dip below that amount needed for six minutes.”

It is also important to bear in mind that microgrids need not be an all-or-nothing proposition. “One of the beauties of microgrids is that they are modular, you don’t have to commit to the approach completely,” Peter Asmus, research director of analyst and professional services firm Navigant, said.

How quickly operators will flock to the concept is yet to be seen, with challenges around lithium-ion regulation and recharge/discharge limits still to be resolved, but the momentum is clearly there, Asmus said. “We’ve bought into the fact that we are moving to distributed energy, towards microgrids. That’s what the research shows.”