American Electric Power (AEP) set out to build a new data center after a power failure at its 32-year-old facility caused it to reassess the capabilities of its infrastructure. The failure was caused by an underground network incident the company said had a substantial impact on its data center functionality.

The original data center serviced all external and internal operations, supporting the American utility provider’s customers across seven states. The other data centers in its portfolio support business operations and disaster recovery, but not day-to-day operations.

As a result of the power failure, the company decided in June 2014 that construction of a new facility would provide the best way to recover lost performance capacity and to modernize the company’s infrastructure. The new data center was built with specialist needs of the utility provider in mind, something that helped AEP win an award from DatacenterDynamics for the best enterprise data center. 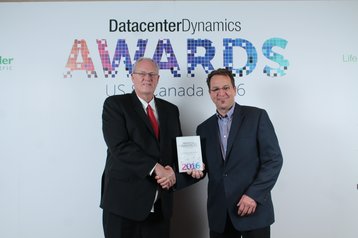 The company commissioned Compass Datacenters to build the new 20,500 sq ft facility which moved from Columbus to a new site in Albany, Ohio.

Compass worked to an accelerated delivery schedule, breaking ground in September 2014 and targeting the migration of all production applications to the site by the end of 2016.

Before AEP selected a developer to lead the project, it identified the various demands the final site would be required to meet.

The new facility had to be operational before April 1, 2015 so AEP could begin migrating equipment. It also had to be located within 40 miles of the company’s existing site because of the need to exchange data between the locations.

Because the company is a provider of electrical power it is required to meet standards set by the North American Electric Reliability Corporation (NERC). These include cable plant and power distribution requirements.

The site would also need to provide power and network access prior to occupancy, and eventually achieve Uptime Institute Tier III certification of constructed facility.

AEP decided against colocation partly because the site needed to be highly specialized.

As part of the deal, Compass worked to ensure construction of the facility was completed in stages, in concert with the utility provider’s strategic aims.

The ‘open-book’ working process used by Compass to allow for transparency throughout the project ensured, for instance, that based on AEP’s need to install its own dark fiber, both point-of-presence rooms were completed in time for the company to start early burn-in.

On top of its standardized data center model Compass offered personalized design, meaning that for this application it provided NERC-compliant cabling and adapted trays, as well as a special power distribution structure.

From the start of the project in March 2014 to the handing over ceremony in March 2015, AEP said it replicated data between its old and its new site in less than a year from the time it set out to find a new data center. There was no disruption in service to the company’s customers, AEP said.

The utility provider said it had based its entry into the DatacenterDynamics awards on the basis that the project delivered the first product that has been developed solely for the needs of the enterprise user – rather than for facilities.

The project is an example for the industry because it is a true enterprise data center product that incorporates the fundamental functionality needed by the vast majority of enterprise level customers and their IT requirements, AEP said.