DC distribution is not just for the giants

Facebook and Google are trying rack level DC power. It could be your turn next

Hyperscale data center operators have it easy. They can tweak their custom hardware, revise their custom software, and reroute their custom network infrastructure to gain every micro-percent of efficiency.

Commercial data centers have to juggle a different set of challenges, from customer complaints to integrating equipment from every conceivable manufacturer, all the while trying to make a profit in an increasingly competitive market.

But there is one area where the playing field seems to be level, for both hyperscale and commercial facilities. They are all reliant on electrical power. Further, all facilities receive power in the form of alternating current (AC), and deliver it to their IT equipment in the form of direct current (DC).

Every data center from the smallest to the largest, is keen to get the best out of its electrical supply, as  even minor improvements in efficiency can provide huge savings. For this reason, one issue has come up regularly for the past few years: where is the boundary between AC and DC?

Why DC in the data center?

Why are we considering DC distribution? Rudy Kraus, former CEO and founder of Validus DC Systems explains: “Direct current is the native power resident in all power electronics. Every CPU, memory chip, and disk drive consume direct current power. Alternating current was chosen as a power path based on criteria set 100 years ago, 50 years before power electronics existed.”

One of the main attractions of using DC power in data centers is eliminating the need to convert power from AC to DC and back again numerous times before it gets to the computing equipment. Power enters the building as AC and is usually stepped down to a voltage that can be safely routed throughout the building. Moreover, in the case of a data center, a large portion of the power is sent to the Uninterruptable Power Supply (UPS) system where the AC power is converted to DC power to maintain the batteries.

Before leaving the UPS system, the DC power is converted back to AC power, which is then distributed to the equipment needed to keep the data center operational even when the power grid fails. At each piece of equipment, the AC power goes through one last conversion to DC power in individual equipment power supplies. 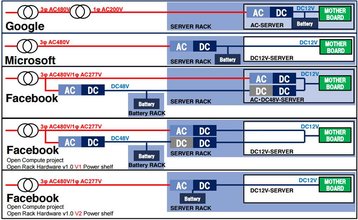 Facebook has been one of the early adopters, employing both AC and DC power technology in its Prineville, Oregon data center. The schematic (right), from a presentation given by NTT to Open Compute Japan, represents how Facebook and other enterprise data center operations are employing DC power.

It’s not just for hyperscale

The big name data center operators are not the only ones considering or implementing DC power. It’s being tested in various pilot projects including one in Milwaukee.

Minnesota-based data center operator Vaultas - which has a particular focus on business continuity and disaster recovery - is working with DC power specialist EDCS Power, of Milwaukee, Wisconsin on a project at Vaultas’ data center in Milwaukee.

The two companies are installing a power system based on the  schematic shown on the left.

John Meinecke, president and CEO of EDCS Power explains: “We take a 208V AC drop just like any normal AC-PDU (Power Distribution Unit), and convert the 208V AC to 12V DC at a power shelf in the rack.”

To make use of the 12V DC at the rack, EDCS Power modifies 1U servers incorporating a 12V DC power supply and backup battery within the 1U confines. 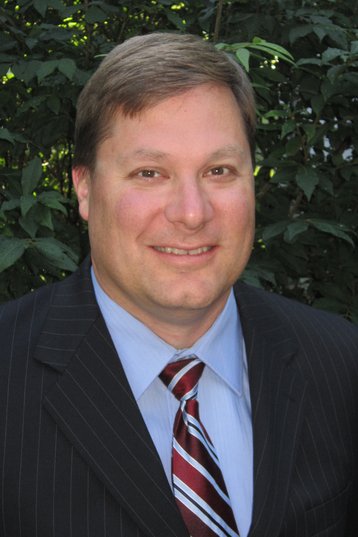 If the rack contains networking gear (normally 12 VDC ready), Meinecke says the power draw is low enough that EDCS Power includes a single battery backup for all the networking devices in the rack. Meinecke points out that this approach is similar to what Facebook and Microsoft are using in their data centers, and the companies are seeing much-improved efficiencies.

From the meter to the motherboard

When it comes to publishing power efficiencies, it is important to compare apples to apples. Meinecke cautions that most efficiency ratings apply to individual components such as UPS systems, but he thinks a more realistic measurement would be to determine efficiency from the incoming electrical meter to the motherboard. Meinecke adds, “EDCS power systems are approaching an efficiency of 92 percent.” 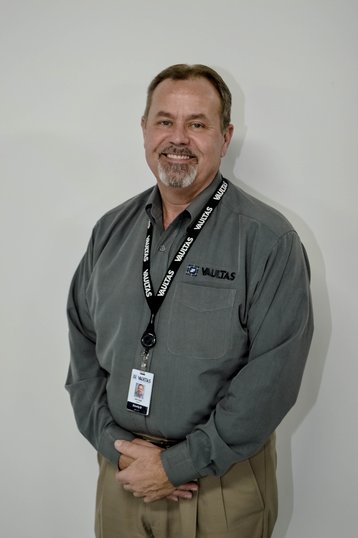 Besides the gain in efficiency, John Unger, president of Vaultas, expects to eliminate the following equipment from the Milwaukee data center:

One ancillary, albeit important, advantage of hybrid AC-DC power systems is the elimination of unequal electrical phase loading.

Why is this important? A paper by HCL Technologies and Arizona State University explains: “The even distribution of the load into the three phases of the PDU is necessary to reduce reactive power in the PDU and to increase its efficiency. If the loads in each of the three phases of the PDU are different, then several inefficiencies are observed such as an increase in the required capacity of the UPS to supply the same amount of power to the rack and an increase in line loss.”

One solution would be installing additional equipment that balances the load across all three phases. An alternative method preferred by both Meinecke and Unger is deploying a hybrid AC-DC power system, which eliminates the concern altogether.

Enough of an advantage to switch?

Not everyone is convinced that DC power is the answer. It seems that the return on investment (ROI) is not all that some data center operators want them to be. However, the big guys — Facebook and Microsoft, for example — are convinced, and that has to mean something. And there are smaller outfits giving it a good look.