Enterprises considering their options will automatically look at the financial impact of any options. They should also look at carbon emissions. 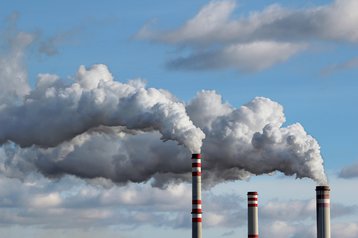 And they may find that decisions about their IT resources - including whether to run a data center - will have a big impact on their emissions.

Have you set targets?

If your company has set targets for limiting emissions, then you will need to track those emissions so you know if you have met the targets.

Even if fighting global warming is not a number one corporate goal for your company, there are plenty of other good reasons why you will have to keep track. Among other things, proposed changes to the SEC rules on reporting risk could mean US companies bigger than a certain size (having $25 million in assets) will have to report their carbon emissions. Other nations have similar rules.

So having a weak story on emissions can harm your prospects for raising money from investors and other sources. At some point, you need to do carbon accounting.

The major standard for carbon accounting is the Greenhouse Gas Protocol (GHG Protocol), a global standardized framework which measures emissions from private and public sector operations and their ecosystems. It is a joint effort from the World Resources Institute (WRI), and the World Business Council for Sustainable Development (WBCSD).

The GHG Protocol is where the Scope 1, 2 and 3 emissions are defined (see Box).

Carbon accounting uses ideas from lifecycle analysis (LCA) and there is also an ISO standard (ISO 14064) for it.

There are concerns that ISO 14060 might not be exactly in line with the GHG Protocol. For this and other reasons, large companies have set up Carbon Call, a movement to make sure carbon accounting is actually useful and consistent.

The new SEC rules are likely to apply to the most obvious emissions your company produces - Scope 1 (direct) emissions and Scope 2 emissions produced by your energy suppliers.

You may also have to report on Scope 3 emissions - those you cause within your entire ecosystem of suppliers and customers - which is normally a much larger figure.

If you have set targets for Scope 3 emissions, then you will have to account for them. And the SEC could well come after you for detailed figures.

What’s this got to do with your data center?

Given that IT is likely only a small part of your carbon footprint, it can get overlooked, or dealt with too quickly - but there’s a serious debate in the data center and cloud sector, over who has the best story on emissions.

If you are calculating the carbon footprint of your IT, you must determine the emissions (Scope 1, 2 and hopefully Scope 3) of the servers and network equipment you run in-house. If you build a data center, there will be significant Scope 3 emissions embodied in the equipment and the construction of the building.

But the chances are high that you also run some of your IT in the cloud. You will need to account for the emissions that causes. But will those emissions be counted in the same way you account for in-house IT?

When the cloud began to take off in the 2010s, cloud providers asserted that they were reducing the carbon footprint of their customers, because the IT resources in the centralized cloud data centers were deployed more efficiently.

All the IT loads were virtualized and aggregated on the smallest number of servers, so there was less wasted hardware - a full data center can be run more efficiently than an empty one, so when enterprises shift their IT into the cloud, it is often counted as a reduction in greenhouse emissions.

In 2020, a study led by Laurence Berkeley National Laboratory found that between 2010 and 2018, there had been a massive surge in computing capacity in data centers, with only a marginal increase in energy used - and therefore little increase in Scope 2 emissions.

The result was attributed in part to small inefficient enterprise data centers being replaced by more efficient capacity in the hyperscale facilities run by cloud service providers.

Coauthor Arman Shehabi of LBNL said: "Less detailed analyses have predicted rapid growth in data center energy use, but without fully considering the historical efficiency progress made by the industry.”

How green is your cloud?

The cloud leader Amazon Web Services (AWS) has lost little time in capitalizing on this, and offers a free tool for customers, which tracks the carbon footprint of cloud resources in AWS data centers. It then helpfully helps users compare this with what they might emit if they ran those resources in an in-house facility.

Needless to say, the in-house figures are estimates made by Amazon, and AWS instances always come out much better. In many instances, they come out an unlikely 88 percent better. The tool ia also limited in only reporting monthly aggregate totals.

Amazon has promised that it will have net-zero carbon emissions by 2040, so the company tells users that moving to the cloud is a surefire way to reduce emissions.

"If you are an AWS customer, then you are already benefiting from our efforts to decarbonize and to reach 100 percent renewable energy usage by 2025, five years ahead of our original target," said AWS evangelist James Barr in a blog post.

Barr says "the AWS path to 100 percent renewable energy for our data centers will have a positive effect on [customers'] carbon emissions over time."

However, it’s worth pointing out that the AWS tool only takes account of Amazon’s plans to use renewable energy (Scope 2) in the AWS cloud, ignoring Scope 3.

The search for control over hybrid IT spend

And there are question marks over the way AWS accounts for its own emissions, since it makes heavy use of power purchase agreements (PPAs). It pays for renewable energy to match the amount of energy it uses - but it matches variable renewable sources with AWS’s steady consumption - so its PPAs may only cover about half the energy used in the AWS cloud, according to a report written by McKinsey for the Long Duration Energy Storage Council.

AWS is not alone - Google also offers a carbon footprint tool to cloud customers, but this does also include useful features such as a reminder to switch off server instances which are not being used.

Look for a third party

Given the potential conflicts of interest, you may want a third-party to measure your cloud footprint. One company that claims it has this is Cirrus Nexus, a company that has moved into cloud carbon accounting from straightforward financial measures.

"The same data that we collect for cost optimization also works for carbon," Cirrus Nexus CEO Chris Noble told DCD at the launch of its TrueCarbon tool. "If a company is running 100 VMs in a data center, we can tell them the most cost-optimized place to run that - whether it be in that data center, some other data center, or another cloud provider. At the same time, we can say you're causing X amount of kilos of carbon to be produced - and you'll produce less carbon somewhere else."

The Cirrus Nexus tool examines cloud use in real time, and cross-references that with the known footprint of the data centers used in the regions they operate.

As with all the other cloud carbon accounting tools, the job of comparing with in-house resources remains. For that job, you will need to have your own internal expertise - or work hard to find someone outside your organization with no vested interest in selling cloud or on-premise solutions.

Carbon emissions are not simple to account for. As well as the greenhouse gases you produce yourself on site (for instance by running a diesel generator), there are more which you are indirectly responsible for.

These are the indirect emissions created by generating the energy used by the company. This includes electricity, but also includes steam, heating or cooling if your organization buys those in.

This is the potentially vast category of emissions created within your supply chain. This includes both upstream and downstream emissions. If your company has a building constructed, there will be a lot of scope 3 emissions in the materials such as steel and concrete, and Scope 3 would also include the emissions embodied in making the equipment such as IT systems that you use, and in providing you with raw materials to carry out your business.