Colocation service providers face a unique dilemma in the modern era, where older buildings sometimes run out of power and cooling before they run out of space. One way to save space and energy is to upgrade a center’s cooling, but how does one add a chilled water plant after the building has already been built?

CenturyLink managed to come up with a solution that proved so successful we awarded the company the Energy Efficiency Improver’s Award.

Thinking inside the box

The idea was to upgrade and replace the cooling system using a ‘chiller-in-a-box’ (CIB), which crammed a lot of the cooling equipment into a single container. The resulting box reduced power consumption of the cooling plant by over 30 percent, reduced noise levels, reduced equipment footprint allowing for expansion within the existing property, and made the system easier to use and maintain. “The ability of colocation facilities that were built 15-20 years ago to be upgraded without adding floor space, or incurring downtime will be transformative,” the company said.

“We were looking for ways to increase the efficiency of our data centers in a small footprint. And so we incorporated basically all the parts of a chilled water plant that is water cooled, including an economiser (which is a plate and frame heat exchanger) and we were able to put that on a footprint that’s the same size as a smaller air-cooled chiller. So we can do one for one swaps and increase the efficiency by five times,” said CenturyLink’s director of global data center design & energy efficiency Bill Gast. 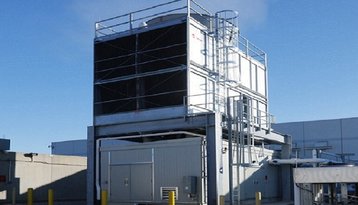 CenturyLink first tried its chiller-in-a-box idea in its Columbus CL1 data center. The company replaced the redundant dry-cooler loop with an integrated chiller / heat exchanger / tower system, reducing the PUE from 2.10 to between 1.5 and 1.6. The new system provides chilled water year-round at 10°C (50°F), uses the facility’s existing econo-coils to provide cooling, and reduces the cooling by 400kW year round.

“In the place of a single 375 ton air-cooled chiller it was found that a unit using less than half the kW/ton and three times the cooling tonnage could be installed and in most cases be run instead of all other air-cooled chillers at a given site,” the company said. The system is designed to survive 15 years of continuous operation, and was fabricated offsite before being deployed and operational within three weeks.

There are seven additional CIBs in various stages of development “totaling 7,750 tons. Once deployed these will replace an average kW per Ton of 1.25 with the new average of 0.2 kW per ton,” CenturyLink said. The company has identified 32 facilities that have potential savings and capacity increases, and currently has plans to implement CIBs at five sites per year for the next five years.