Water makes up about 70 percent of the Earth’s surface. Most of it is contained in the oceans, but there’s still about 11 million cubic kilometers of water in lakes and rivers, all of which has the capacity to absorb heat.

The data center industry is generally pretty conservative, but some operators have seen an opportunity to cool their servers more efficiently, and dived right in.

Green Mountain’s two data centers in Norway use natural water sources to cool their IT loads. DC1, in a former NATO ammunition store in Stavanger, uses gravity to draw water from a fjord, from the depth of 75m, up through the pipes and into the pumps of a cooling station, releasing it back out 30m below the surface. DC2 in Telemark takes its water from a source which was initially used for hydro electric power generation. 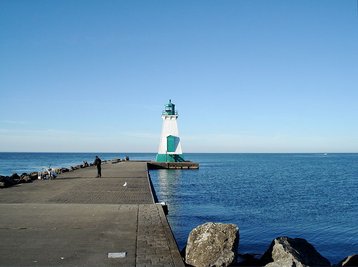 In Toronto, both Cologix and Equinix have attached their facilities to the Deep Lake Water Cooling system, which draws on the chilly waters of Lake Ontario. Melting ice from surrounding mountains keeps the lake at a constant temperature level throughout the year. Whilst the upper layer is drawn and used as potable water, the water underneath, which remains at 4°C (39.2°F) all year round, is drawn via three 5km polyethylene intake pipes and channeled to a filtration plant.

Then, it is pumped through heat exchangers into an energy-transfer station. The cold air then enters a closed circuit, reaches cooling towers, and finally the buildings connected to the cooling system, including the data centers mentioned above. The water then goes into the city’s potable water system.

Other data centers are cooled by water simply taken from the ground. TierPoint’s facility in Washington is built on an aquifer, from which it draws water via a 200 foot well, shifting 750 gallons a minute through heat exchangers; the cold air enters a closed loop before being blown onto the servers. As the water circulates at high speed, the heat dissipates almost instantly as it is returned to its source.

The B’eeau Lac project goes one better: a French technology hub near the Swiss border, Technolac, is planning a similar setup, using water from the Lac du Bourget to cool offices and a data center.

There are plans to take the waste heat it collects, and use it for central heating in newly built homes. That’s an idea which is also being applied in district heat systems, widely used in Scandinavian countries, but there are practical considerations (see factfile below).

These are success stories. They have cut energy consumption, and reduced the chemicals in the public water supply. The data centers are using less chlorofluorocarbon for air conditioning, and water isn’t wasted.

However, all of these projects, much like the free air cooled data centers of the Nordic countries and those in the windy plains of Iowa, depend on a set of very specific circumstances, says Barry Shambrook of TCL data, a teacher of DCPRO’s Data Center Cooling Professional course. “I wouldn’t totally discount it, but it is very dependent on the local environment and what’s available.”

Data centers boast that lake and river cooling systems have little to no impact on the environment, but Shambrook says the bigger picture won’t be affected. “It might be a little bit more efficient discharging heat to water than to air, but you’re still discharging the heat to the environment. So I wouldn’t pretend that it was environmentally friendly.”

But those using lake and river cooling point out that warming water and returning it doesn’t consume natural resources, and puts less pressure on public water supplies.

This is important for Nautilus, a company that emerged during the California drought with a proposal to put data centers on reconditioned navy and shipping barges. The idea is to bring data centers close to where they are needed, and Nautilus hopes to give its floating data centers a launch party at the beginning of 2018.

It took years of hard graft and applied maritime engineering to get Nautilus to this point, but the idea is simple: water is drawn from wherever the barge is moored, sifted through filters and a heat exchanger, feeding the cold to a closed loop of fresh water in a rear-door cooling system. And then the warmed water is released into the source.

From the magazine: For more info, or to subscribe go here – Fay Marney

So what of the environmental impact of releasing warm water into seas, rivers and lakes? Nautilus president and CEO James Connaughton says that the barge design releases water at a temperature “below the most stringent regulatory standards” in the US, promising a maximum temperature rise of 4°F (2°C). “So our discharge does not cross regulatory thresholds. We are a fraction of the discharge of power plants or large industrial process units. And we’re on par with the heat discharge of all the ships in the ports where many of our data centers will be located.”

Even if it raises temperatures, he says there are “so many places on earth where a little bit of warmer discharge will have no, or a beneficial, environmental impact that you can very readily avoid places where it might [be harmful]. And, if you’re thinking creatively, because we are actually producing warmer water as a by-product, we have some additional future capabilities to interact with desalination systems, with water treatment; you know, public water treatment systems where a little warm water is actually a good thing. That’s an additional upside depending on where we put our facilities.”

Connaughton has a track record in energy policy. He was an environmental adviser to George W. Bush, serving as a chairman for the White House Council on Environmental Quality. He now represents ClearPath Foundation, a lobbying group that supports “conservative clean energy,” such as natural gas, hydropower and “new technology for clean coal.”

Green Mountain backs him up, saying that the warm water it releases from its data center “helps fish procreate.”

Shambrook reserves judgment: “It’s stuff that’s beyond my understanding to be honest, because you’re affecting the local environment. I suppose you could argue that you’re affecting it in a positive way.”

Whether or not it is eco-friendly, Connaughton is convinced that water cooling will take the center stage: “In the next twenty years, every new data center is going to be water cooled. Twenty years from now, there will not be air cooled data centers, because water is a much more efficient heat transfer agent. Air cooling will be the niche application of the future, water will be ubiquitous. And we know this because that’s what’s happening in every other sector.”

And if the sea is a bit warmer by then, maybe we can all go for a swim.

Can we use the heat?

Water can absorb and transport heat, so why not reuse that heat? Plans to do this may sound good on paper, but are difficult to implement in practice. “If you’re taking water from a source, warming it up and then you’re using that heat, that’s a very good way of using wasted energy,” says Barry Shambrook. “My only skepticism would be how many homes you could feed with hot water from a reasonable sized data center.”

Shambrook estimates one rack could warm two homes, so a data center could heat hundreds of homes: “I can see it working if you had an apartment complex close to a lake or a big source of water and a smallish data center.”

The problem is that data centers generate heat continuously, and demand for heat is not steady. “Data center loads are there all the time, 24x7, 365 days a year, but people don’t use hot water 24x7 365 days a year,” says Shambrook. “They use it a lot in the evening, when they come home, first thing in the morning, and not much in between. You have to balance the capacity with the need.”