Are you ready to go off-grid?

Generating your own power can make you independent. But with great power comes great responsibility….

Businesses are looking to save money and effort, and boost security by adopting the cloud. But in a competitive market, cloud providers need to offer better service guarantees.

When a service provider offers 100 percent uptime guarantees and imposes stiff financial penalties on itself for anything less, there are consequences. Loss of power to the that provider’s computing space becomes something to be avoided at all costs.

Most data centers have processes and technology in place to deal with any form of power disruption, but these costly backup power systems remain dormant unless an outage occurs. What if these systems could be employed during normal operation to reduceopex,  increase reliability, and possibly provide a revenue stream? 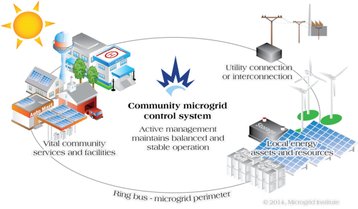 According to the Microgrid Institute: “A microgrid is a small energy system capable of balancing captive supply and demand resources to maintain stable service within a defined boundary.”

Microgrids, at first glance, appear to be miniature versions of a traditional power grid, consisting of electricity generation, distribution, and controls such as voltage regulation and switching regulation. “However, microgrids differ from traditional electrical grids by providing a closer proximity between power generation and power use, resulting in efficiency increases and transmission reductions,” says General MicroGrids, a solution provider for renewable energy and microgrid technologies. “Microgrids also integrate with renewable energy sources such as solar, wind power, small hydro, geothermal, waste-to-energy, and combined heat and power (CHP) systems.”

The ability to switch between the local power grid and others energy sources including renewables goes a long way to sooth anxious data center managers. Having multiple primary power sources also offers several advantages (see Benefits) including some that will make CFOs happy.

As with every new technology, it is best to know what one is getting into — especially something as critical as a data center’s power infrastructure. Power Analytics, a company that develops and supports simulation and analytical software for electrical power systems, strongly suggests the first step would be an in-depth feasibility study. In a white paper the firm points out that the system must operate as anticipated, interconnect seamlessly to the local utility grid, and fit the company’s unique circumstances and budget

“By conducting a feasibility study before project commencement, you have more control over the project’s outcome,” says the paper. “The feasibility study will reveal hidden technical aspects, unanticipated costs and benefits, and potential market opportunities.”

A feasibility study should also be able to vet the microgrid design, provide a way to evaluate potential vendors, calculate the anticipated payback period, and explore ways to maximize return on investment.

“The feasibility study needs to determine the necessary communications capabilities to give the client real-time situation awareness through an easy-to-use command and control dashboard interface.”

According to Power Analytics, a company contracted to perform a feasibility study should be able to create a virtual simulation model using the client’s initial design. With the virtual model, safety issues can be anticipated, potential optimization points will become clear, and best/worst case scenarios can be run: “Whether the client intends to operate the microgrid in stand-alone mode or interconnect with the local utility, modeling capability ensures the client will be fully aware of how the system operates prior to its construction.” 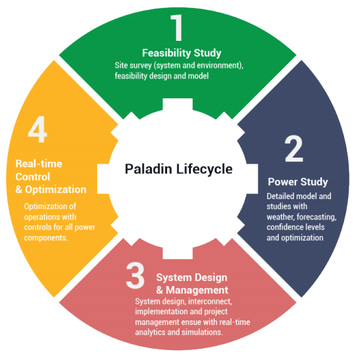 Cover all the bases

You must also plan for the following:

The next step in the feasibility study is to model the microgrid and run tests against it based on the customer’s parameters. “We will run a variety of simulations to select best-in-class options, identify and eliminate redundancies, test system reliability, and examine system resiliency,” says Power Analytics. “We will also gain an understanding of the system’s dispatch capability, power flow, power quality, voltage stability, arc flash, and circuitry safety under ordinary and extreme scenarios.”

If a microgrid is feasible, the next step would be a detailed power survey taking into consideration weather, load forecasting, confidence levels, and optimization.

System design and management must be studied, including interconnects, implementation and project management, using real-time analytics and simulations.

Real-time control and optimization should be ensured also.

One final headache for operators who want to move to renewable energy is the challenge of intermittent supply. The wind does not always blow, and the sun does not always shine.

Microgrid technology is designed to compensate for this by continuously adjusting between renewables, the local power grid, or some other fossil fuel energy source such as fuel cells.

All in all, if the initial expense has an acceptable return on investment, a microgrid system melding renewable energy generation with local power grids will increase power supply reliability, stabilize long-term energy costs, and reduce the company’s environmental impact.