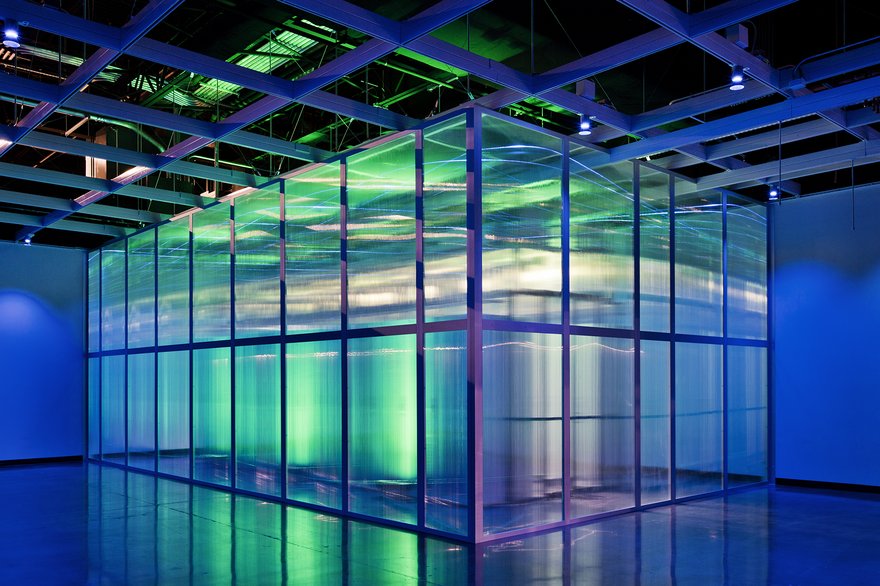 Aligned Data Centers has a technology-based pitch. Because it has a modular, distributed approach to cooling, it can be more efficient and flexible, and pass those benefits on. Customers in its two colocation spaces, in Dallas and Phoenix, can pay for power and cooling on demand.

It’s all based on cooling technology from Aligned’s sister company Inertech. Both are subsidiaries of Aligned Energy, along with design firm Karbon, and data visualization DCIM outfit Energy Metrics. Inertech provides the heat rejection systems, and the distributed cooling technology which makes the whole thing work. On a visit to Dallas last month, we took a trip to the Aligned Data Centers in the suburb of Plano to take a closer look.

The site is just round the block from ViaWest’s shiny new facility, and the two make a fascinating contrast. Both companies have a cracking story to tell, and impress with their professionalism, but are utterly different. At ViaWest, you walk into a space that looks and smells new, and promises corporate strength and reliability. At Aligned, you feel you have arrived at a place where boundaries are being pushed by a team that likes to geek out about tech.

The tour starts as always, with photo-ID required at reception, and Aligned’s CMO John Petralia ushers me through the man-trap airlock. Inside there’s a kitchen, meet-me offices, and a breakout area, which contains a giant TV screen, arty desks and a serving hatch from the kitchen. That space is good for events, Petralia tells me.

The whole building used to be a CD factory, which is a good heritage for a data center, giving solid floors, clean air and good loading and unloading facilities. It’s been completely repurposed, of course, with a large external space for the power and cooling plant.

The human-friendly area has some neat tricks: the lighting is delivered by LEDs, which change color if something important happens, for instance a power failure causing a shift to the UPS system, giving staff a non-intrusive warning. The data center also operates with proximity sensing, so visitors are tracked by their badges.

This gives Aligned power usage effectiveness (PUE) of 1.15, even with a partially filled data center - a figure they guarantee in their contracts. “In a traditional data center, the first customer will have a high PUE and a high cost,” said Petralia.

Chief engineer Mark Kennaugh got down to the details. He explained the site is fed from multiple substations, with a potential for 30MW of power, that can be delivered flexibly and dynamically at 1-25kW per rack in any configuration. There’s 2N redundancy, and its electrical installation allows power from any back up source to be routed where needed.

But the cooling (below) is where the Aligned people get excited. Racks are placed on the solid floor in traditional aisle configurations, but these are cooled by individual eSync fan units from Inertech, mounted overhead. These are cooled by refrigerant distributed from the cooling system, by an Inertech cooling distribution unit (CDU), with the heat expelled by an Inertech Cactus heat rejection unit.

There is no raised floor and no computer room air handling (CRAH), with cooling close-coupled to the racks, said Kennaugh: “CRAH doesn’t remove heat, it just moves it.”

The facility has a demonstration area with a hot aisle cooled by eSyncs. The demo pod is designed to replicate the real world - which means it has every conceivable kind of rack, all of them tested with heat load units. I’m not sharing my photos, but I’m betting that aisle would impress any visitors who are real data center customers. It shows something most colo providers say is impossible: running real-world, mixed and messy technology at peak efficiency.

We follow the refrigerant pipes to the cooling distribution unit (CDU) which makes the whole system possible. Inside is a compressor (pump) which actually is a standard component from a different industry. Although it wasn’t designed specifically for data centers, Inertech spotted its potential to distribute coolant to the racks, and built it into the system.

Beyond that, hot and cold water pipes take the heat to the Cactus heat rejection unit which uses evaporative cooling to each vent up to 500kW of heat.

There is science going on here, and the Aligned team is keen to share that science, saying that it’s the foundation of its business, and the source of its flexibility. It also makes the system more environmentally friendly, using less power, and 85 percent less water than a traditional build, Petralia said.

And there’s more to come, with the company floating a science breakthrough on the reuse of waste heat. We’ll have more on that in a future article.