This white paper presents a framework for classifying the different types of prefabricated modular data centers, based on three attributes, so that ambiguity is eliminated. 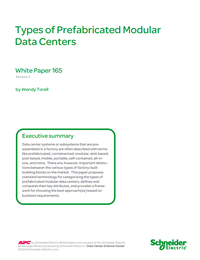 Data center systems or subsystems that are preassembled in a factory are often described with terms like prefabricated, containerized, modular, skid-based, pod-based, mobile, portable, self-contained, all-in one, and more. There are, however, important distinctions between the various types of factory-built building blocks on the market. This paper proposes standard terminology for categorizing the types of prefabricated modular data centers, defines and compares their key attributes, and provides a framework for choosing the best approach(es) based on business requirements.

Many terms, with varying definitions and scopes, have been used to describe data center systems or subsystems that are pre-assembled in a factory. A partial list includes:

These terms create confusion and lead to dysfunctional discussions because they overlap and are ambiguous in meaning.

A prefabricated modular data center is defined here in this paper as a data center that is:

Thank you for downloading your whitepaper, you should receive an email shortly with a link to your resource paper. Please check your "Junk" folder if you do not receive your confirmation email after 30 mins.