When is a kW not a kW? The answer is ‘when the UPS is kW=kVA rated’

It’s not entirely an odd thing that UPS have, over the past 20 years, moved from their original Power Factor rating of 0.8 to, for many, 1.0. They used to be rated at 0.8, just like the utility power system, transformers and generators. In fact, today, all generator alternators and nearly all distribution transformers are still rated at 0.8. That means that they can deliver up to 80 percent of their kVA rating (the arithmetic product of Volts multiplied by Amps) in kW (power in Watts).

In other words, a 100kVA machine that is rated at 0.8 Power Factor can deliver 80kW. This made very good sense when the loads were dominated by induction motors that consumed power at 0.83 to 0.85. For the technically curious the Power Factor is the cosine of the angle between the Voltage waveform and the Current waveform, the larger the angle the greater the current has to be to transfer the power.

To the non-electrical this sound complicated and even some ‘electrical’ people I have met get confused, so don’t worry if you don’t get it – you are not alone. 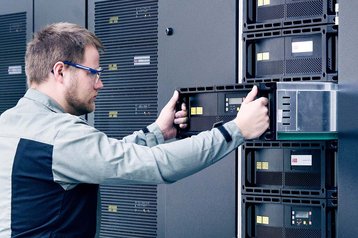 As the loads moved away from 0.8 (towards 1.0), there came a point when a UPS OEM in Denmark called Silcon (later APC and later still Schneider) made a line-interactive UPS module and declared that it was rated at Unity Power Factor - so a 100kVA machine could deliver 100kW. Sounds really simple to sell to non-electrical (some IT) buyers, right? Yes, and it did. They did very well enough and sold out for a considerable sum.

Anyway, turning the clock forward to today we now have all rotary UPS still at 0.8, so a 2000kVA machine can deliver a maximum of 1600kW but no static UPS at 0.8. They have moved steadily to Unity with only a few at 0.9 or 0.95. So, which is ‘best’? Well, if you know the load Power Factor then none of them are ‘right’ unless the load happens to match the machine. As the load Power Factor varies you just have to hope that the machine covers it – and, aided by partial load, it always does in service.

So why am I rambling on? Well, a little while ago I audited a facility for a prospective purchaser. The specification seemed clear enough in the sales brochure and included 700kW of ICT load. On the audit visit I noted a 700kW capacity UPS (Unity Power Factor) and 700kW of air-conditioning. The first thing that looks ‘wrong’ is that the cooling system should always be a little higher than the UPS. Lighting, solar gain from the building fabric (and even people) add to the design load – albeit only 20-30kW in this case. Few, if any, facilities run into trouble in service because the ICT load is never anywhere near 100%.

But then look at the UPS: It can deliver 700kW but only if the load is Unity Power Factor. I checked with the client and his exiting load was running at about 0.94 Power Factor. At that Power Factor, the UPS could only deliver 658kW (i.e. 700 x 0.94). Again, rescued by partial load, few facilities are ever troubled by this type of problem.

So, we had a UPS that can deliver 658kW and the cooling system can keep up, even on the hottest day. The problem only hits you when the customer wants it demonstrated with a 100% load with a power factor that is not 1.0 or an (intelligent) purchaser spots the problem and wants only to pay 94% of the price. 20 years ago, the most stringent consultants used to specify inductive load banks at 0.8 Power Factor but that has largely disappeared.

The bottom line is that the ICT load is NEVER unity and UPS modules that are rated kVA=KW cannot deliver the rated kW into the real load. In my experience load Power Factors can vary down to 0.91 (especially at low server utilization), so the ‘gap’ in rating is up to a not inconsiderable 9%. However, partial load WILL avoid the problem as long as you don’t mind paying for kW that you won’t be able to use.

Luckily with IGBT transformer-less UPS we don’t have to add problems coming from capacitive (leading) Power Factor or distorted harmonic load current – but that is another story.