The IT kit in data centers could get a lot more efficient and less wasteful, if people move to standardized, “white boxes” based on open standards, instead of the proprietary kit they use now. But so far, there’s a trust issue: can you rely on a no-name box?

There are definite signs that users are moving towards converged hardware, including unbranded servers. According to a survey of 850 IT decision makers by 451 Research, the majority of enterprise data centers are still full of kit from the likes of HP, Dell and Lenovo. But they aren’t loyal: 17 percent say they are “very likely” to change vendors in the next 90 days. 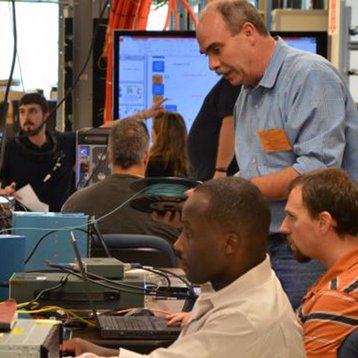 OCP testing at the University of New Hampshire – UNH IOL

And in their future plans, only 17 percent say they will buy more of those traditional servers that the traditional vendors like to sell. A greater proportion - 40 percent - are looking to buy converged infrastructure. Some of this comes from old-school vendors - or their offshoots, like the EMC-dominated VCE - but it also includes an increasing amount of white boxes.

This might be surprising, given the innate conservatism of the IT buyer, who tends to rely on trusted brands. But white boxes have strong endorsement from the big web players, one of whom - Facebook - kicked off the Open Compute Project (OCP), which creates open source standards for unbranded data center kit.

You might still find some reluctance to adopt the stuff, especially given that the web-scale world is so different from other data centers. Doubts about reliability and interoperability may have been behind a row that kicked off earlier this year, when OCP was accused of skimping on testing.

But it looks like those allegations were wide of the mark. OCP covers network switches as well as servers, and it turns out that the Project has been setting up some very robust interoperability tests, at the leading center for such work - the University of New Hampshire’s Interoperability Lab (UNH-IOL).

UNH-IOL has been in the network testing game so long, many of the protocols whose implementations it once rubber stamped are dead and gone: names from the past like Token Ring, FDDI and OSI.

The Lab has moved on, to a central role in tests for the new, faster and Metro versions of Ethernet that go to 25Gbps, 100Gbps and beyond.

The UNH testing takes networking products implemented according to the OCP standards and tests that they operate as the standards say they should, then checks they work with each other. The Lab holds plugfests and publishes the details of its tests, so vendors can check their products in their own labs.

The Lab also uses student labor in the tests - an important fact, as it means the process is affordable and educational - and it has a great by-product. It produces smart people who understand and enjoy open network products.

It seems people are already getting used to the idea of unbranded white box products in their data centers - but work like this will make them even easier to adopt.