Usually re-using waste heat is too much like hard work. But maybe that’s changing

We finally got summer in Britain, so heat is on our minds. And we’ve recently heard a couple more stories emerged of European data centers reusing their heat.

It’s a good idea to harness the waste heat in a data center. Otherwise it’s energy literally thrown away, and if you can find a way to make it productive, that reduces our overall carbon footprint.

Who can do it? 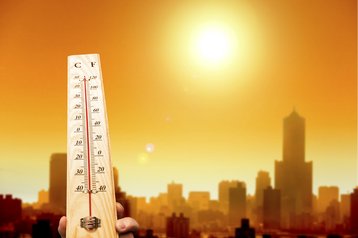 The tricky bit has always been how to re-use it. The biggest web-scale data center are built in areas where land and power is cheap (as long as there is enough connectivity) so often there’s no-one there to use it. Even in towns, there’s not much call for hot air at a 28C to 35C (82F to 95F) which is what you get from air-cooled systems.

There’s more opportunity for selling the output of water cooled systems, which can be at 60C to 70C (140F to 160F), but there are fewer facilities that operate that way.

Some countries (mostly in Northern Europe) have district heating systems in towns, which can take hot air and use it for neighborhood buildings. If you’re near one of those, you don’t have to invest heavily to get your heat recycled.

So we don’t often hear of it happening for real - and this month we got a few tantalizing details of two projects apparently moving that way.

Microsoft has a data center in the Agriport zone near Amsterdam, in the Netherlands. It’s been operating quietly for a year or more, and is being expanded, but Microsoft and its partners haven’t said anything about it in public.

As the word Agriport implies, the area is zoned for farming, and heavily populated with the Netherlands’ signature industry of bulbs grown in greenhouses.

Some reports say the local farmers are hostile to the idea of tech on their land, but other stories say the data center is actually helping them out, by providing warm air for those greenhouses.

We don’t have the details, somewhat surprisingly. If Microsoft really is helping grow tulips near old Amsterdam, you’d think there would be a press release.

We also heard of plans for another site which could be reusing even more heat. In Ireland, Ecologic wants to build a facility with its own combined heat and power (CHP) generating system onsite. This would make the data center more or less independent of the grid, and it would also produce more heat to be sold or used locally.

Spokespeople for the site have also suggested that the CHP plant might be able to channel its waste CO2 to local greenhouses. This sounds like a step towards carbon capture - but I want more details, as CHP waste gases would surely require a lot of cleaning.

It’s not clear yet how all this will play out, as this site is still at the planning stage. However, in my book, two sites moving towards heat reuse is a sign of progress.